In the early spring of 1967, the Stanley Cup playoffs…held the attention of hockey fans everywhere in these hills. Except in Bolton.

In the early spring of 1967, Bolton hockey fans didn’t need the Leafs or Canada’s faltering world cup team for excitement; nor were they giving much thought to the soon-to-expand NHL. That’s because, after a fourteen year drought, Bolton was celebrating no less than four league championships by the hometown boys.

In just over two weeks, the local peewee team, Sheardown Transport, had won the league title, and the midgets, Bolton Golfers, had done the same. Even the little kids, the BA Flyers, had won the novice championship. It was Bolton’s juvenile team, however, that was really packing fans into the old wooden arena on Hickman Street. From the moment the season began, the red hot Kinsmen had been toppling one team after another en route to the all-Ontario Juvenile “C” finals.

This team had set the stage for drama a year before. On a Saturday afternoon in April 1966, in the southwestern Ontario town of Dresden, the Kinsmen were one goal up going into the third period of the final and deciding game for the provincial championship. Then in the dying minutes they were scored on twice and came home empty. Disappointment in Bolton that spring was real but short-lived – the hometown fans had every reason to be confident that the next hockey season would bring something better. 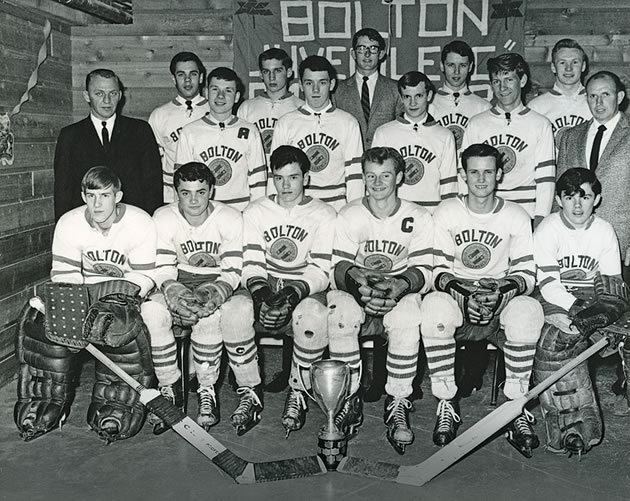 When the Kinsmen took to the ice in the fall of 1966, they knew competition in their league would be stiff. Although they would face traditional rivals from towns of similar size, such as Woodbridge, Elmvale and Aurora, the schedule also put them up against Barrie and Newmarket, where the pool of available players was much larger.

But Bolton’s experienced and very able coach, Roy McKay – a major factor in the team’s success – shrewdly expanded his own talent pool by inviting in stars from the local midget team, such as the high-scoring Gene Fewster who, along with two other younger players, became the unstoppable “Kid Line.”

By early January, after a weekend in which the Kinsmen played four games in three days (typical of the schedules then to minimize travelling) and swept all four, it was clear that Bolton’s juvenile team was a major force. By the first week of February, they had won the league championship, eliminating much-favoured Barrie and handily taking out Newmarket. They moved swiftly through the next stages, playing through a sequence of two-out-of-three series without a single loss, first against Nobleton, then Elmvale and then Cannington. (In the six games it took to do this, Gene Fewster scored fifteen goals!).

After next taking out Lakefield, again in a sweep, the Kinsmen were in the finals. They had breezed through the playoffs and had almost forgotten what it was like to lose a game. But now, in the all-Ontario finals, they were up against a team with a similar record: the Maidstone Green Hornets.

Maidstone, a small community (and a township in Essex County) near Windsor, had a long tradition of local hockey. In 1967, its players had been drawn from across the township to produce a team that no other juvenile team in southwestern Ontario could touch. When they bowed to the Kinsmen in a two-game, total-point series (4-4 and 8-6), it was the first and only time the Green Hornets had ever lost.

On the day after the finals, there wasn’t a soul on the streets of Maid stone. In Bolton there was a parade. Once upon a time, local hockey was that important.

“Those young teams could fill the arena almost every game back then,” says Bill Whitbread, veteran sports reporter for the Bolton (now Caledon) Enterprise. “They played good hockey, but it was more than that. Take the scheduling. On the same night you’d have the bantams play at seven o’clock, the midgets at eight and the juveniles at nine. Whole families would turn up because everybody would know at least one player. Most of us knew all of them! They were our own so it meant a lot for community spirit.”

It was the same in other towns, Whitbread adds. “The NHL had only six teams then, even though in ’67 it was the last year for that. And they were kind of in a different world, so in your own town local teams were really popular. Every once in a while a home team would get a player like Fewster – could he score goals! He set up plays too; and never hogged the puck – so you’d have a kind of home-grown star. People become even more interested in a team when that happens.

“Today, if a kid is a top player there’s a good chance he won’t even play at home. If he’s old enough he might get drafted and be moved somewhere. Some parents even sell their homes and move to another town if it’ll benefit their kid. There’s not much opportunity to build a loyal fan base when that kind of thing happens.”

Gene Fewster, now a successful building contractor in Caledon, has his own take on the home-team phenomenon. “Hockey’s a business today, at least rep hockey is. For us on the Kinsmen back then – and for the other teams too – it was the love of the game, the fun of playing.”

“Now that I look back at it, I realize how much the crowds were part of that,” Fewster adds. “In fact the fans were almost like another person on your team. Because it was your hometown, you wanted to do better for them as much as for yourself. That doesn’t seem to be the way it works today.”

Both men, the veteran reporter and the former player, agree it is unlikely the days of the hometown crowd and home-team excitement will return any time soon. On the other hand, if hockey fans want to enjoy the delight of cheering on a winner, it could be that the hometown arena may be the place to look.

The Leafs won the Stanley Cup in 1967 but haven’t been close since. Canada’s national team was shut out for almost the next three decades. Meanwhile Bolton’s teams have picked up an impressive number of championships since ’67, and a quick scan across our hills shows similar results in other communities too. For nostalgic hockey fans, who may have become cynical about the game they love, perhaps local teams are the answer.

1967 was a good year for local hockey. While the Bolton Kinsmen were cutting a swath through southern Ontario, other teams in the hills were equally busy. The Cheltenham Harvesters became all-Ontario Intermediate “C” champions, taking out a team from Wiarton that year in the final.

It was also in Wiarton where the Shelburne Muskies shone after eliminating their Palmerston rivals. In house league senior hockey, the Grand Valley Bruins took the championship game against the Grand Valley Lions.

Meanwhile back in Peel, Bolton produced yet another winner when its team in the Central Peel Junior Farmers league took out the team from Alloa three straight; and in Brampton, the seventh annual novice tournament, the biggest in the world, was bringing in teams from all over Ontario and the northeastern U.S.

An Arena with Personality

Because Bolton’s old arena on Hickman Street was built originally as a natural ice rink (though it had artificial ice well before 1967), the site was chosen in part with a view to locating in the coldest spot in town. It must have worked – in reporter Bill Whitbread’s many columns it became the “Hickman Street Igloo.”

For Bolton teams, the “Igloo” was a bit like having an extra player on the bench because visiting teams were easily unnerved by its architecture. There were sheets of curling ice immediately outside the boards and no seats. Instead, fans cheered from a catwalk above the boards that hung over the players’ benches. The unique design, at least in the opening minutes of a game, could be intimidating to strangers.

Because it was situated beside the Humber River (so dampness added to its “igloo” reputation), the old arena was often subject to atmospheric developments which contributed to its one-of-a-kind status. In April of ’67, for example, Wildfield’s game against Drennan’s Department Store in the North Peel Senior League finals had to be postponed because of fog, not on the streets but inside the building.