Our Own Eggs: Backyard Chickens

In a bid to become somewhat more self-sufficient, my husband and I recently decided to try keeping our own chickens for egg production.

Mention you keep backyard chickens and you get one of two reactions: a glazed look of non-comprehension, followed by a small shoulder shudder, or an exuberant, “Oh, I love my chickens,” from someone you had no idea was a do-it- yourselfer.

Although we are both only one generation off the farm, our egg quest soon brought the glum realization that we are what the locals call “book farmers.” We picked our parents’ brains, queried suppliers, and eventually purchased a cheery paperback called Keep Chickens. 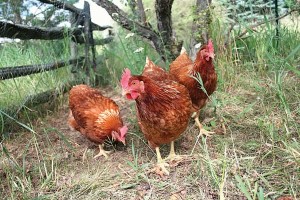 John Davis, owner of Davis Feed & Farm Supply in Caledon, says the bird flu scare of a few years back slowed the trend to backyard chicken keeping. But by last spring, he says, production couldn’t keep up with demand.

With the fervour of a winter gardener contemplating the spring seed catalogue, my husband set about designing his chicken villa, debating what kinds of chickens to acquire, and wistfully dreaming up his “girls’” names. Oh yes, these girls would have names.

Before the snow was even off the ground, the hammers and Skilsaw were activated, although what started off on March mornings with an orchestra of buzzing, crashing and hammering, ended by day’s end with a random tap…tap…tap, as the late spring cold insinuated itself into his bones.

After several disappointing delivery delays and an ominous sotto voce “There’s trouble at the chicken farm” comment from our supplier, our Rhode Island Reds finally arrived, one month late. They were rather larger birds than we had expected and rather squashed into their shipping crate. Still, lo and behold, the blessed event, we had our first egg, right there in the dented and pooped-upon orange plastic shipper.

It would be several more days before the hens would begin to lay regularly, and then the treasure hunt was on. The hens scattered like roadrunners, disappearing into the spirea to commiserate, as we crawled about in the deep grass of their yard, looking for where they might have hidden their first few misshapen eggs. Oddly, so we thought, they didn’t automatically march single file into their house to lay.

They didn’t know how to sit in their fancy new roosting boxes either. Each day my husband would patiently don his long-sleeved fire gloves, catch each flailing bird and put her protesting-highness inside the house on the perch, hoping she’d get the message: “See, you can do it, little chicken.” Each day, the hens made skeptical sounds and fled as he approached. Eventually they got the idea, but proceeded jointly and severally to lay all their eggs in only one roosting box, in a kind of a chicken assembly line: “Here’s one (wiggle, wiggle), now move over, here’s another, now move over.”

Mornings were announced with a worried chorus, a sound that really sets chickens apart from the joyful daybreak trillings of their relatives in the wild bird kingdom. Chickens emote like professional kvetches, moaning and protesting over their latest aches and pains. However, that gives way soon enough to throaty clucks, as they flap their joy at my husband’s approach. They have now graduated to a perch in a crabapple tree, and they run and jump around – apparently just because they can.

How they sleep is in the realm of weird farm tales. Are our chickens different? We had assumed they would retire gratefully each night into their cozy roosting boxes. But these girls sleep in a small snuggled heap of feathers and beaks, their heads pointing into one corner, feet thrust out behind, easily two-thirds of their volume disappearing like rubber chickens in the prop pile at comedy camp. Their curious habits leave us wondering, like adoptive parents, about the conditions of their early upbringing. 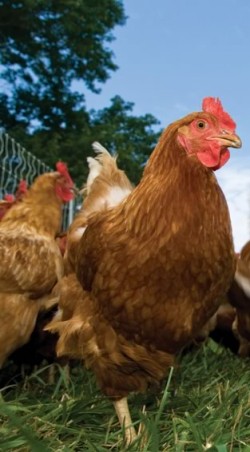 At first they even disdained table scraps, scratching a safety zone around the giant U-boat of a zucchini placed in their yard. Now they love leftovers and happily pick away at stuff they find themselves, as though every bean, grub and grasshopper were the best thing ever. Every day is brand new and every day they chatter away incessantly, as though nothing but nothing could be better than a blue sky, some fl ax seed and grit. And they check out every new thing with cautious curiosity. “Oh I don’t know about that,” says the boldest, as she sidles closer and eventually gives my knee a peck. Then they all follow suit.

Much as I like my chickens, I confess a certain perplexity when it comes to the voluptuous love of chickens that I have witnessed among other, sometimes surprising, enthusiasts. These girls are steely eyed and inscrutable. Is this a calculated intelligence that I just don’t get? Their chattering and squawking translate in my head to an existential lament, as in, “Where are my eggs? Where are my eggs!?” They are not cuddly at all, though I know some chicken keepers would protest.

And their names? To me they might as well be You, You and Hey You. I can’t tell them apart. But after much consideration of the babyname canon, my husband named them for the Gabor sisters. Indeed, one is flamboyant and forward, like Zsa Zsa, the next almost equally extroverted, like Eva, and the third, well, she is “the dark one,” the oft forgotten Magda.

As for their penchant for serial marriages, well, we like our sleep and don’t plan to have a rooster around any time soon. The sisters will still deliver their delicious one-a-day. And those “dahlink” princely boys with the big back combs and swagger? Well, they’d just spell trouble.

Although chickens are “easy keepers,”  our rural towns and townships tend to allow backyard chicken keeping only in areas zoned agricultural or rural, with appropriate setbacks. Interestingly, in Caledon’s zoning bylaw under the term “livestock facility,” the words “chicken” and “egg” do not appear. When pressed, bylaw officers in several jurisdictions admitted that their job is reactive. If someone complains about nasty neighbouring chickens, officers will be obliged to investigate; however, they don’t go looking for infractions. A few urban communities, such as Guelph, Brampton and Niagara Falls, allow backyard chickens. Toronto is considering a community pilot project, while Vancouver recently approved chickens with some restrictions. Kitchener-Waterloo rejected the idea.

The “pro” arguments for backyard chickens include self-sufficiency, especially for families hit by the recession, the “raise-your-own- food” educational value, and the simple healthy protein supply. The “con” arguments begin with fears of Avian flu and end with concerns about the birds’ welfare – chickens require daily attention, and risk being ignored when the novelty wears off.

Still, in villages and cities throughout North American, backyard chickens have caught on, sometimes as an underground activity in defiance of bylaws. In Toronto, where it is still illegal to keep chickens, one guerrilla chicken raiser maintains a website, www.torontochickens.com, that is choc-a-bloc with tips on raising urban chickens. And there are accessories, too. If you want to save yourself the trouble of building your own coop, check out the Eglu, a portable, futuristic chicken pod for your friendly fowl, reputedly designed by four British Royal College of Art graduate students (www.omlet.us). Or consider the Ready Coop, not as elegant as the Eglu, but Ontario-made (www.readycoop.com).

John Davis, owner of Davis Feed & Farm Supply in Caledon, says the bird flu scare of a few years back slowed the trend to backyard chicken keeping. But by last spring, he says, production couldn’t keep up with demand. As well, as interest in food quality grows, “people are asking for organic and hormone-free feed for their chickens, and putting in more vegetable gardens, too. They just sleep better at night knowing where their food comes from.”

You are what you eat

If we are what we eat, I would be a cruelty-free, free range, flax-fed, omega-3, large brown egg.

If you’ve ever wondered what those many labels on egg cartons really mean, the Egg Farmers of Ontario (formerly the Ontario Egg Marketing Board) kindly provides a glossary for Grade A retail eggs at www.getcracking.ca. All eggs have about the same nutritional value except those rated as Omega-3, Omega Pro or Vitamin Enriched, in which case hen feed has been fortifi ed. Below is a brief description of what egg labels mean. The list says nothing about taste, which I can assure you, improves richly with the quality of a hen’s life. Once you get used to good eggs, there’s no going back.

Large registered egg processing plants are regulated by the Canadian Food Inspection Agency, which governs nutritional labelling, among other things. Producers on a smaller scale, provincial and local, might include discretionary labelling such as “organic-style” or “cruelty-free” to describe their products.

Note that while several of these labels imply a better standard of living for the chicken, until you get to Free Range, no access to the outdoors is guaranteed. Again, if we are what we eat, consider the chicken raised in confined squalid circumstances, and whether eating the produce of a miserable bird can be truly healthy, karmically or otherwise.

After the cost of chicken housing, which may be as simple or elaborate as you fancy, backyard chicken keeping reduces the cost of a dozen premium eggs to about $1.95.

Monica Duncan is a freelance writer who lives in Adjala.
Show 6 Comments

The cholesterol bugaboo related to eggs is just that, an issue for those with heart disease, but not for the rest of us. Were stocking up on recipes that use lots of eggs: angel food cake, hollandaise sauce, clafouti, creme caramel, quiche, varieties of vegetable tarts on puff pastry, and my personal favourite, a sinfully rich French recipe worthy of Michelin.

Preheat oven to 350°F. Line a round 8-inch pan tightly with foil. Melt chocolate with half the butter in a ceramic bowl in a microwave oven at half power for several minutes. (Observe melting process: If it melts fast, boils or smokes, lower power rating accordingly). Remove from microwave, stir and let cool for 5 minutes. Blend in rest of butter bits. Add eggs one at time, beating well after each. Stir in sugar and vanilla and turn into pan. Bake about 25 minutes (cake will be soft in centre). Cool to room temperature and refrigerate overnight. Turn out of pan and remove foil, sprinkle with powdered sugar and garnish with walnuts or strawberry halves.