Mary Lazier’s new, illustrated book tells the history of Dufferin County like you’ve never heard – or seen – it before.

There’s the official history of Dufferin County – documented in such serious tomes as Into the High County by Adelaide Leitch. And now there is the unofficial history, or, more aptly, the “picture book.”

The book begins and ends with stories that even Adelaide Leitch would deem worthy of classic historical treatment: the Petun longhouse settlement in the north end of the county and the present-day development of the Melancthon wind farms.

But between those opening and closing pages, Mary Lazier takes readers on a wild ride, not so much through the history of Dufferin, but through the psyche of its people. This is a not a book about historic personages, but about everyday personalities. It’s a people’s history, but there is nothing ordinary about Dufferin’s people. 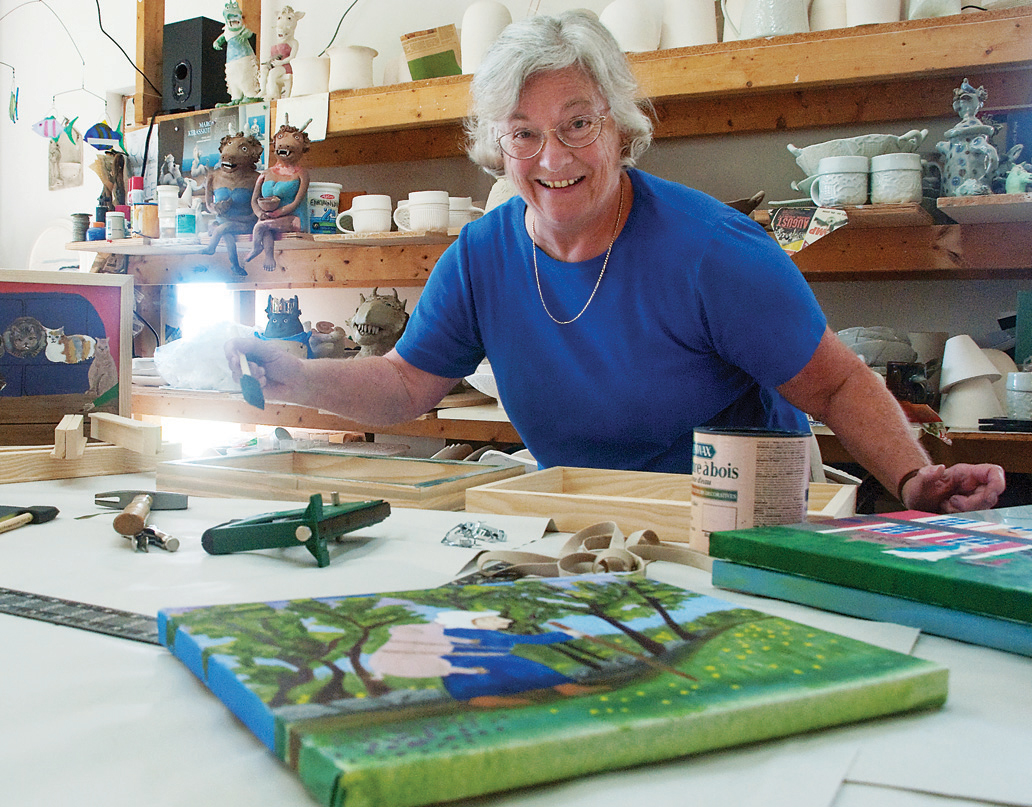 Mary Lazier at work in her Mulmur studio, framing the original art for sale at the launch of Stars of Dufferin County. Photos by Rosemary Hasner.

As author and actor Mag Ruffman writes in her foreword to the book: “Almost anyone would be underprepared for the depth of character one can encounter in Dufferin County’s established residents. If I’d had this wonderful book when I moved here about a decade ago, I would have known what an individualistic bunch we all are. And I would have relaxed.”

That individualist bunch includes Miss Phyllis Maltby, “The Hello Girl,” who operated the switchboard in Laurel in the early 1900s; Mary Ireland who won the “Husband Calling” contest in Shelburne in 1951; the Williams Hillhouse and Jelly, who famously discovered a mastodon skeleton in an Amaranth farm field, then toured it across North America; and Bruce Beach who maintains an extensive underground nuclear bomb shelter near Hornings Mills, constructed from forty-seven school buses.

The book also recounts some incidents of visiting “stars,” such as how the outlaws Jesse and Frank James hid out on a Mulmur sideroad, and the day The Rolling Stones cleared the shelves at the Shelburne LCBO, and the time Willie Nelson arrived by helicopter for a concert at Rock Hill Park.

And there is a good selection of the county’s memorable moments, such as the séance to raise ghosts at Orangeville’s Town Hall Opera House and the annual Wiccan harvest-moon celebration near Mulmur. These are interspersed with idiosyncratic accounts from the illustrators’ personal experiences, such as the day they were shifting the sliding shelving at the museum and heard the plaintive cry, “You’re squishing my husband!” 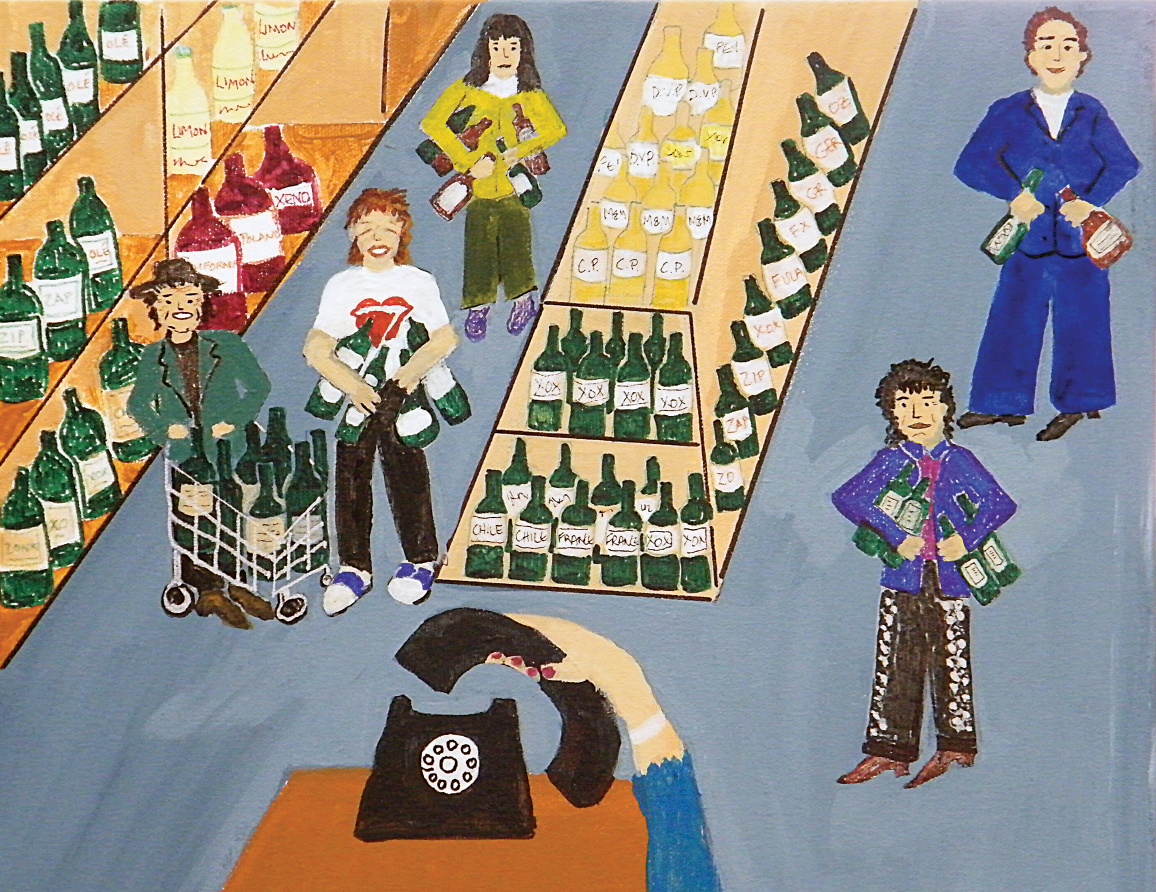 In 1975, a group of strangers arrived at Shelburne’s LCBO in a stretch limousine. The staff was impressed by the enormity of their purchase, and were amazed to discover they were the famous rock band, the Rolling Stones.

Mary Lazier, 69, is a county star in her own right. Born and raised in Toronto, she always had an artistic bent. But her mother, herself an accomplished artist, wouldn’t let her go to art school, “because she didn’t feel that you could make a living as an artist. Maybe she was right. I don’t know.”

So Mary began her working life as a lab technician – “which meant I could illustrate things, and look at things, and it was really quite fun because it appealed to my scientific side.” But she continued to have itchy fingers, and in 1972 she took her first potting class.

Mary went on to study at Sheridan College and by the late seventies she had launched an artistic co-op. For the next decade, Spiral Pottery provided classes, studio space and weekly teaching opportunities to potters. Her work has now been widely exhibited, including two solo shows at the Gardiner Museum of Ceramic Art in Toronto.

In her own distinctive style, Mary creates a combination of thrown and hand-built tableware, using techniques that relate to pastry-making, cake-decorating and dressmaking. She also constructs engaging clay garden characters. The consciously primitive style of those sculptures is reflected in the “naïve” collages and other mixed media illustrations in Stars of Dufferin County.

Many of her garden sculptures are mermaids, who, as Mary says, “are sybarites. They don’t do housework, change diapers or tires on the cars. You never see them standing in line at the grocery store because all they do is lie around looking gorgeous all day.”

Mary’s enchantment with the “mermaid lifestyle” was the inspiration for the title of the autobiography she self-published in 2008: I’d Rather Be a Mermaid. 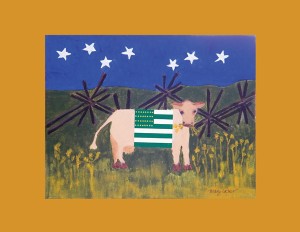 The book cover illustrates one of Mary Lazier’s favourite stories: In the mid-1800s, Dufferin Protestants feared an invasion by the American inspired Fenians (their flag was a green version of the stars and stripes). Four hundred men mustered in Rosemont to repel a rumoured assault by Adjala’s Catholics, but in the end the only casualty was a cow.

Drawn largely from the journals she wrote as a youth and on her extensive travels, it recounts with wry humour the travails of growing up with a brilliant, alcoholic father and an artistic, distracted mother.

After her mother’s death, Mary and her third, “keeper” husband, potter Mark Tichenor, moved to the family property in Mulmur in 1999. She and Mark built a spacious potting workshop and gallery, which they dubbed Little Red Hen’s Kitchen Garden (web site).

In Mulmur, with her three daughters grown, Mary once more threw herself into the local artistic community, with active involvement in the local studio tours, the artists-in-schools program of the Dufferin Arts Council, the Headwaters Arts Festival Show and Sale, and, over the past six years as co-organizer with weaver Pat Burns-Wendland of the Holiday Treasures Show at Dufferin County Museum.

Mary hatched the idea for the book after seeing a similar one by Susan Baker on trip to Provincetown, Maryland. “I came back here and I thought [Mulmur sculptor] Hugh Russel had sold a sculpture to some Arab sheiks, and I had a picture in my mind of the sheiks arriving in helicopter to pick it up. But that never happened. Too bad.”

With one good story eliminated, Mary and Ursula went about researching others. “I talked to my farmer, I talked to my neighbours, I talked to the folks at the museum,” Mary says, adding that museum curator Wayne Townsend “had more stories than anyone I’ve met in my life.”

From there they followed up, phoning, e-mailing and visiting to get the details. “There is only a small amount of text, but we needed lots of background to create the pictures,” Mary says. 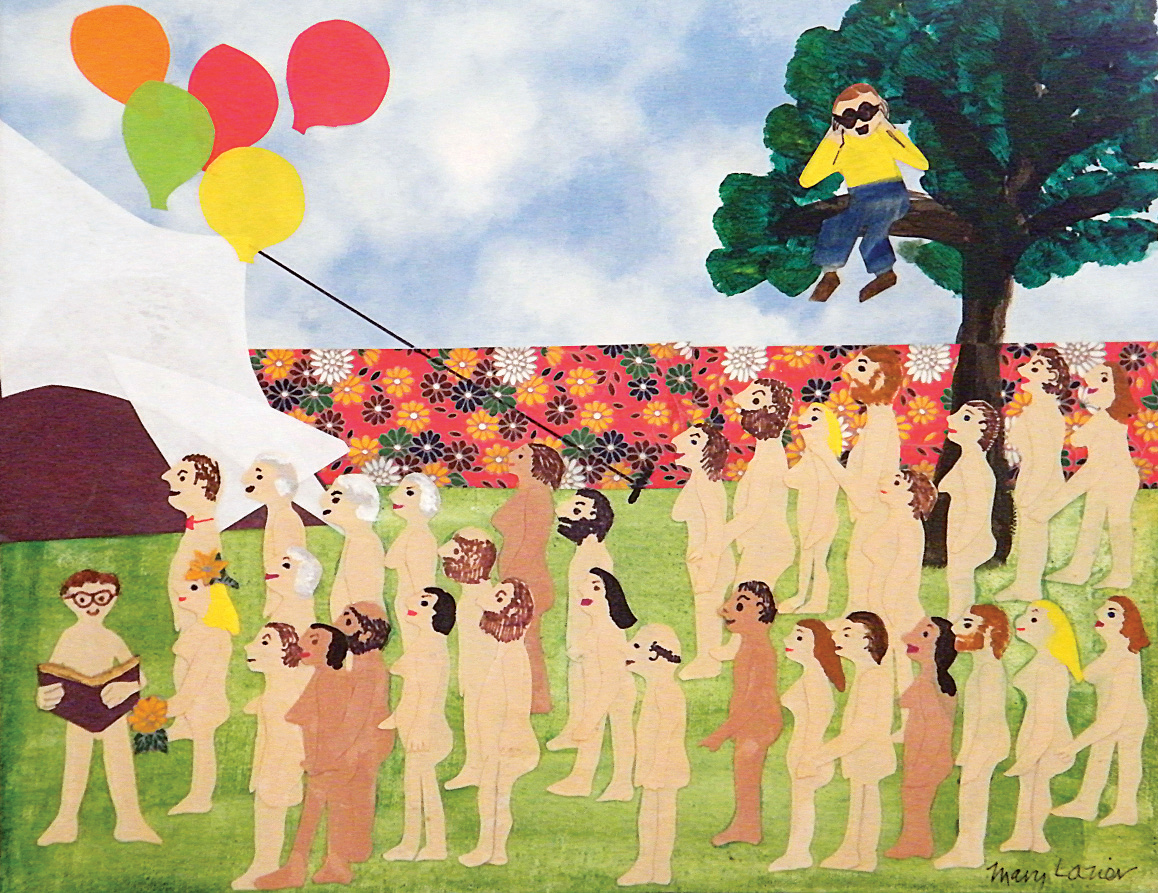 The nude wedding, in 1975, on the Third Line of Mulmur. The uninvited young man in the tree was really there!

In all, Mary and Ursula spent two years researching and creating the fifty-eight illustrations. Mary financed the publishing venture through the sale of a painting by well-known Winnipeg artist Walter Phillips, which she’d inherited from her mother.

Adelaide Leitch’s Into the High County is now out of print, but all true lovers of local history will have it on their bookshelf. From time to time, they may even take it down and blow off the dust to resolve an erudite dinner-table debate about the date the county was founded (1881), or Lord Dufferin’s given name (Frederick Temple Blackwood).

Stars of Dufferin County might nestle comfortably next to Leitch’s history, but more likely it will dwell well-thumbed on the coffee table, at the ready for those less erudite debates about the county’s UFO sightings and nude weddings.

“If I’d had this book to refer to when I first arrived,” says Mag Ruffman, “I would have understood that creativity runs unchecked in this part of the world. If you’re unusual enough, you’re not ignored or made fun of, you’re respected and even admired. And certainly discussed.”

Stars of Dufferin County will be officially launched on Saturday, September 18 at the Mono Community Centre in Mono Centre. 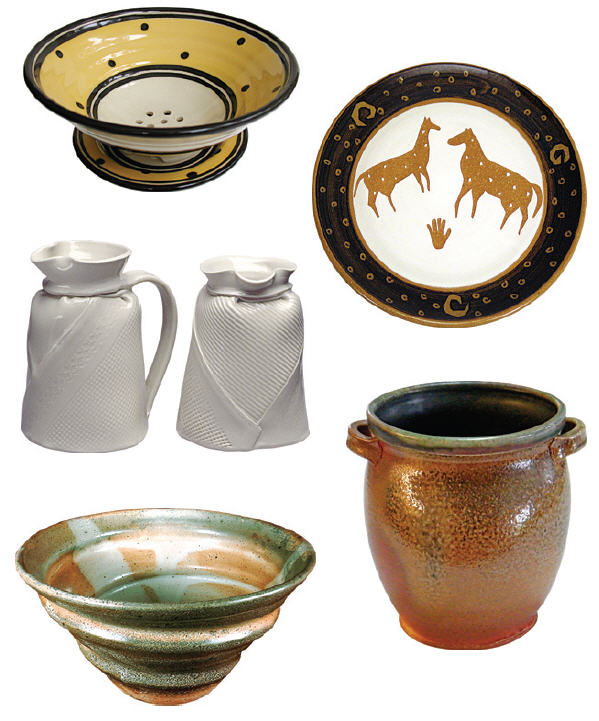 The launch will include a show and sale of Mary Lazier’s and Ursula Crosbie’s original 11″ x 14″ illustrations for the book (mixed media on canvas), as well as a pottery show featuring work by six local potters, from top: Arlene Peters, Rosemary Molesworth, Mary Lazier, Kim Harcourt, Mark Tichenor and Janet Helps (not shown).

The book launch takes place in conjunction with Mono’s Big Day Out, a community festival in “downtown Mono Centre” that celebrates the food, farmers, heritage and landscape of Mono.

The Big Day includes a Mono Children’s Art Show (downstairs in the community centre), as well as two presentations featuring more county lore in Burns Church: a talk at 11 a.m. on heritage barns by historian Dr. John C. Carter, and strange-but-true tales by Carol Cholvat and Dick Byford of the Dufferin Circle of Storytellers at 1:30 p.m. and 2 p.m.

Signe Ball is publisher/editor of In The Hills.
Show 1 Comment