Michael began developing his interest in performing at age eight, when he became a member of Theatre Orangeville’s Young Company.

Click here to read the profiles of our other Local Heroes for 2010.

Does this make my Asperger’s look big?

Michael also puts his own spin on the official definition: “The New England Journal of Medicine defines Asperger’s as an impairment in social interaction. Rigid or socially naive. A lack of emotional reciprocity and … Oh my god! I’m Stephen Harper!”

Harper aside, Michael does share the traits of this autism spectrum disorder with an illustrious crowd. It has been speculated that Thomas Jefferson was an Aspie. Same with Einstein, Mozart, Shakespeare and a long list of other historic figures. These days, the experts cast a curious eye toward Bill Gates. Indeed, Dr. Hans Asperger, for whom the syndrome is named, believed that “for success in science or art, a dash of autism is essential.”

The jokes keep coming during Michael’s fifteen-minute set – a frank, edgy, and decidedly mature skewering of life as he sees it. At home in Hockley Valley, with his older sister Megan (“my biggest fan”) and younger brother Matthew, who has a more severe form of autism, Michael turns down the wattage a little, but he’s every bit as sharp and observant as his on-stage persona suggests.

“I write the jokes,” he says, “Mom edits them, Dad censors them, and Megan decides if they’re funny.”

This family is a well-oiled machine. They all pitch in for each other, along with Matthew’s service dog, a yellow lab named Riley, who provides professional-grade love and support in all directions.

Michael began developing his interest in performing at age eight, when he became a member of Theatre Orangeville’s Young Company. However, a different route brought him to comedy: “I saw a lot of funny things happening and I had all these strange ideas and I wanted to tell everyone.”

Of course, there wasn’t an audience available every time Michael thought of something funny, so, he says, “I started to keep a comedy journal.” Two years on, he’s still writing daily. “Usually five to ten paragraphs a day. One time I wrote twenty-three. They’re just ideas that I might be able to work into something. A resource point.”

A facility with language is often a characteristic of people with Asperger’s, as is an ability to simultaneously comprehend multiple levels of meaning from words. “When told they had to eat and run,” goes the pun, “one Aspie said, ‘That makes us carnivorous pantyhose.’ ”

Last year, Michael’s mother, Susan, learned about Spark of Brilliance. The Guelph-based organization was founded by Judith Rosenberg to promote mental-health healing and recovery through the arts. Its offerings include a course called Stand Up For Mental Health, a program created by Vancouver’s David Granirer, a comedian who suffers from depression. Granirer teaches stand-up comedy to people with mental health disorders as a means of building confidence and fighting public stigma and prejudice.

The organization performs in a wide range of settings, everywhere from psychiatric wards to university and college campuses, prisons and military bases, and for the general public across North America. A typical lineup might include comedians with schizophrenia, bipolar disorder, obsessive-compulsive disorder or any number of other mental health diagnoses.

After a phone interview, Granirer took Michael on as the youngest comic to ever perform in the organization’s roster. According to Michael, “The classes really helped. Now I can write jokes faster, and more at a time. It also helped with the delivery. Now I can tell if the set-up is too long.”

At fifteen shows and counting, Michael is now usually slotted in the premier spot of closing act. With characters such as “Socially Awkward Man,” and ruminations on the life of a teenage Jesus, he takes on the fears, misconceptions and realities of living with mental illness.

Everything is fair game. As Michael warns in the opening moments of his act, “It was recommended that we try and draw the humour from our personal tragedies and shortcomings. So if any one of you has to go to the bathroom, you better go now, because I have eight hours worth of material.”

Michael’s father, Doug, recalls a moment when his son demonstrated his stand-up chops: “I’m sitting in the audience. David Granirer was hosting the show and standing off to the side.” In a rare flub, Michael got off-track with one of his jokes. “I know that he’s blown the set-up,” Doug says. “I look over at David, and I can tell that he knows too.”

The two held their breath as Michael closed in on the punch line. However, Michael had it well in hand, creating a new ending on the fly by turning a joke that was supposed to riff on Barbra Streisand into a punchline about – of all people – Margaret Thatcher. The switch worked, and the audience erupted in laughter.

Realizing they were in the hands of a natural, Granirer could only look at Doug and shrug.

Fresh from shooting for the upcoming television series Splatalot (“I can’t tell you about it or they’ll send people to kill me,” he says), Michael has been riding a wave of success. It hasn’t always been that way, though. “Last year I didn’t hang out with people at school much,” he says, “though I did have quite a few friends outside school.”

Ironically, his humour doesn’t always help much with his peers. The very quality that makes it so sharp to adults means that it can sail right over the heads of early teens, who, for example, don’t even know who Margaret Thatcher is, let alone why she might get a laugh.

And there’s another downside to funny. As with any professional, Michael’s effortless-seeming performances take hours of preparation and rehearsal. By contrast, in social settings there is sometimes pres-sure to be funny-on-the-spot – sort of, “go ahead, make me laugh” – an unfair demand on anyone, never mind a fourteen-year-old.

While Michael admits he is considering making a career out of comedy, more practical concerns are taking centre stage at the moment. He’s in his first year of high school and he’s also an aspiring jazz musician, pondering the possibilities for incorporating the saxophone into his comedy routine.

Just now, success is measured in terms universal to all teenagers. Surviving high school without too many incidents. Keeping up his grades. Making some friends. The female of the species.

So it should be.

For Michael McCreary, banishing the darkness is an after-school gig.

Does this make my Asperger’s look big?

Click here to read the profiles of our other Local Heroes for 2010. 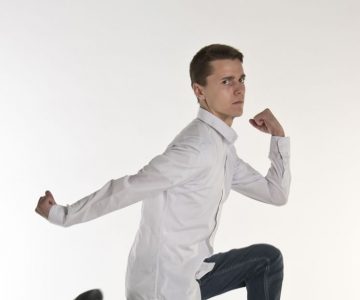 Mono’s Michael McCreary uses his stand-up to shed light on what it’s like growing up and dealing with social situations as someone with Asperger’s. 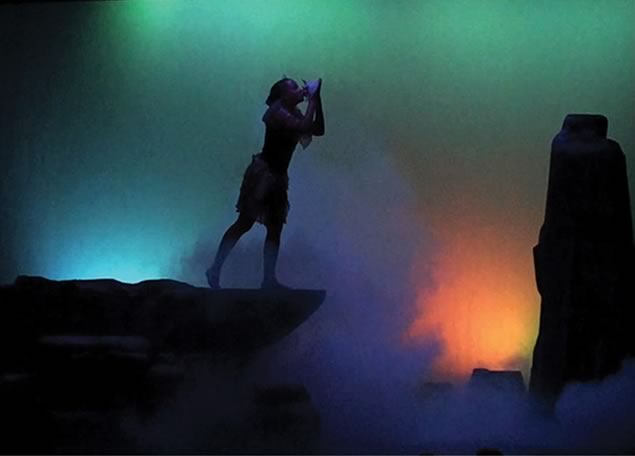 The Enchantment of Young Thespians 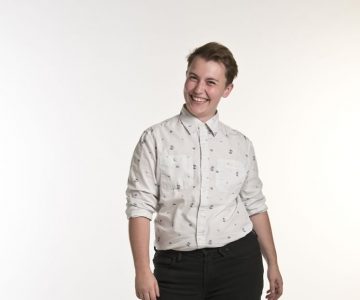 Mono’s Andrew McCreary studies at George Brown College in the child and youth care program with an eye to working in queer and trans healthcare.