Great live music and an intimate setting. What could be better than a house concert?

I have a new friend in the person of Don Howard. Late last spring, he and his gracious wife Jan invited me and about two dozen of their other friends and family into their Caledon home to see a Sunday afternoon performance by the impeccable singer/songwriter Lynn Miles.

I must have been a very good girl somewhere along the line because this is the ultimate gift for this songstress. In fact, Pete Paterson, our photographer, and I may be two of Lynn’s biggest fans. Thank goodness Pete was along and asked questions because I was pretty much stupefied in her presence. Seriously – what on earth was she doing here? Who is this Don Howard guy and what did he have to do to talk her into his rec room? Not only that, he had already hosted Valdy as well – Valdy, for cryin’ out loud!

Well, Don is the retired president and chief operating officer of Penguin Books Canada. But that doesn’t explain it. What’s really behind the concerts is that he and Jan are music lovers. Simple as that. They’ve hosted about six to eight house concerts a year for the past two years. Along with Lynn Miles and Valdy, this year’s line-up included Steve Elliott and Lucie Walker, The Laws, Annie and Rod Capps, and Michael Pickett. The cost to attend? About $25 (which all goes to pay the musician) plus something for the snack table.

Okay, but what do musicians used to packed clubs and theatres get out of the living-room venue?

When I asked Lynn that question, she admitted it can be hard to get psyched for a one-night stand, before an audience who may not know her work, and where the acoustics and setting may not be optimal. But she says the audience reception is inevitably a warm one, and, frankly, the extra cash comes in handy.

It might come as a surprise, but the truth is that the average annual income for a musician is $15,000. Venues such as restaurants can feel hard-pressed in these cautious times to give up space and money for live music when they can tap into satellite stations that feature often mediocre music, mixed with a smattering of Neil Young for credibility. Music by Muzak revisited. Good enough, because people “really don’t give a durn”?

Not true. And here’s how I know. There’s an underground of incredible support for outstanding music bubbling up everywhere. Ordinary folks like Don and Jan – and you and me – are opening their homes and hearts to friends and family, offering a warm and fuzzy place for musicians to proffer their talents. Musicians whose self-esteem would otherwise be chiselled to a nub in a noisy bar or eatery are being wined and dined and generally showered with love and respect in this new version of parlour concerts – and we’re loving it.

In response to our appetite for great live music in intimate settings, organizations such as Home Routes here in Canada and the American-based Concerts In Your Home have surfaced to create individualized tours for artists travelling cross-country. Musicians are matched up with home venues as they wind their way through small communities en route to larger gigs. Over a two-week tour, performance fees and CD sales at the whistle-stops could net a musician another $4,000 or so. Especially when the small venues provide food and lodging. Sounds a lot like the wandering minstrels of old, doesn’t it?

Meanwhile, back here in Headwaters, we have become increasingly aware that there is great talent living in the hills and dales, along with some very hospitable music lovers. Bands with such curious names as Pork Royalty, The Darlings Oiseaux, Bull In The Woods, El Camino and The Warped 45s have positively rocked my socks off at “by invitation only” affairs. 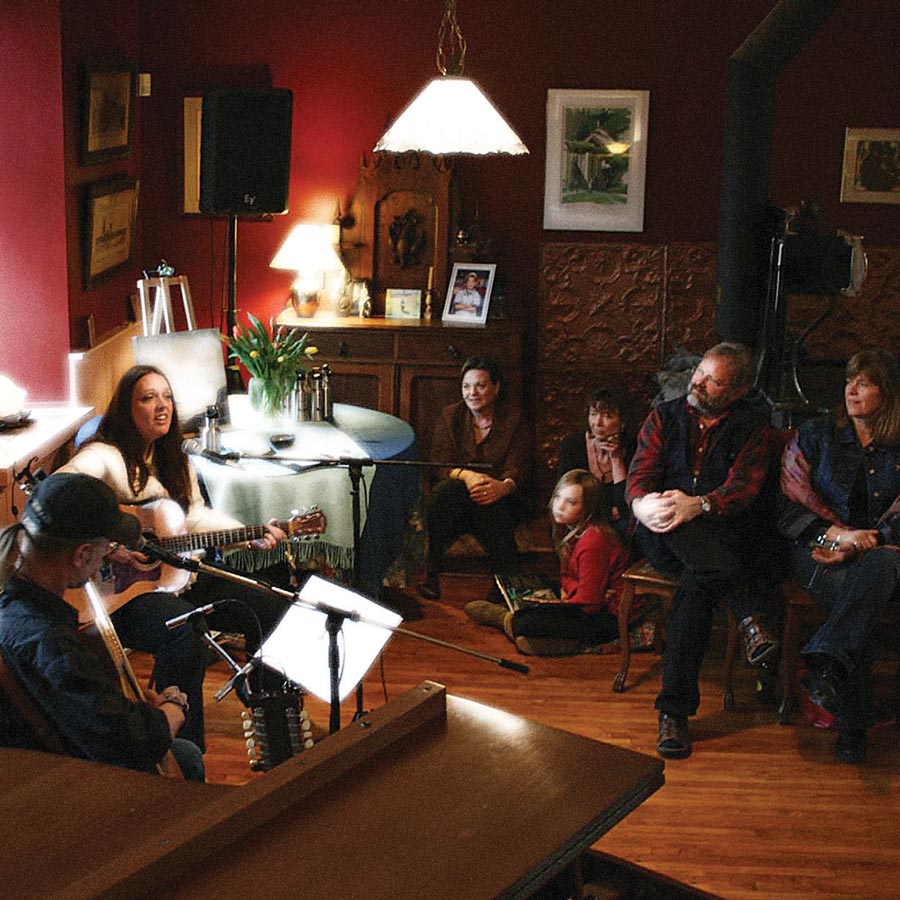 And the food at these shindigs is often a matter of one dish outdoing the next when patrons are asked to help fill a groaning board of grub – sometimes enough to last a whole weekend.

However, yes, you read right. These affairs are by invite only. The reason for that? Insurance. If these were commercial events, it might be a challenge to make a claim, but in my experience, no profits are made by the house. Some house concerts might break even, but as often as not the events are operated at a loss – minimal, one hopes, and entirely up to the host to figure. It’s just like having a party of any kind. How much do you want to spend? And with a guest list of your usual playmates, what’s the difference?

The first house concert I ever attended was at Marilyn Shatford’s place here in Orangeville some fifteen years ago. A caterer, she went all out on the food at the event which featured a lovely, gentle musical friend. It was a wonderful evening.

The next I heard of any such event was when Heather Katz and her husband Michael Griffin spontaneously relocated a concert by Norland Wind to their home. The concert, presented by Headwaters Acoustic Music Society, was supposed to have taken place at the Orangeville Opera House, but on that blustery winter’s eve, the building’s hydro had gone out.

After that, Heather and Michael hosted several happy events in their home. Among others, they featured Scarlett, Washington & Whiteley; The Pomelos, who include our exquisitely harmonizing local sirens, Heather and Laura Bird; Marianne Girard, whose work I adore; and Jory Nash, a favourite folk troubadour. More recently, Heather and Michael took over Broadway Music and continue to present great live entertainment there.

Music lover Carole Lindros has the perfect home in Orangeville for house concerts. It has fantastic acoustics and a balcony providing ample seating overlooking the living room. Last year Carole hosted the party for the release of local songbird Laura Bird’s fabulous CD, The Water In Between. Tannis Slimmon – a darling of folk music – has also filled Carole’s home with her delightful music and essence. And both David Celia and Darren Arsenault played there to full houses, enchanting family and friends with warm humour and lively and lovely tunes.

“You will love the community you create through the beauty and joy of sharing music. It’s not for profit, but to support grassroots Canadian talent in a very personal way – you change your life and your community and have fun in the process,” Carole relayed to me in a recent e-mail. 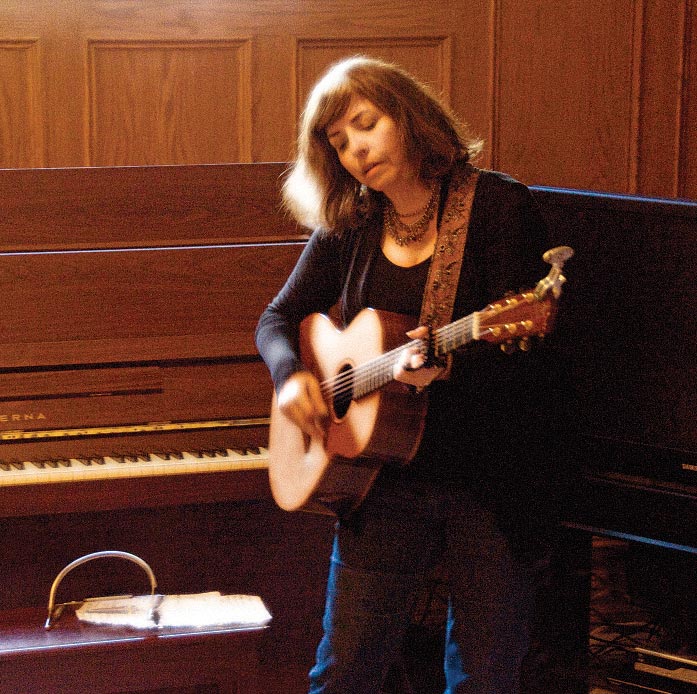 Singer/songwriter Lynn Miles performed to an audience of about two dozen at the home of Don and Jan Howard this past spring. Photo by Pete Paterson

Couldn’t have said it better myself. I understand the pleasure we feel in singing along with the familiar lyrics of old favourites, but I also think we have become lazy listeners, content to settle for hearing the same songs over and over. So I am thrilled that a new frontier for homegrown music is opening up here, across the country, and beyond.

This past summer, my friends Steve Vipond and his wife Jennifer went over the top with a Cajun feast of gumbo, fried chicken and other delectable dishes. While they renovated a grand old Victorian house, they invited their homies to jump and jive to some of the most amazing live entertainment. Host musician Romney Getty would wind us up with her sexy rock/country style of music before a feature band. Smokers, dancers, lovers poured out the front door during the break, hanging off of the porch like it was some kind of gin joint.

Each event is so pleasantly different. Some are inside. Some are out. Some are simple crackers and cheese on a Sunday afternoon, and some are a whole weekend long. And I tell you they are popping up everywhere from the Musicians’ Corn Roast in Yelverton to the Concert for Peace in Crystal Beach.

The live music experience is like taking the kids to a farm to discover that milk and eggs don’t just magically appear on the shelves of the grocery store. It leaves us wide-eyed and fills us with a wondrous sense of possibility and a most uncommonly light heart.

There’s a house concert just a stone’s throw from you, and if you’re lucky enough to be invited – just say YES!

About the Author More by Lisa Watson