A hundred years ago, readers of every local newspaper here in the hills could rely on two themes in the week after Hallowe’en. One was editorials and letters to the editor denouncing trick-or-treat pranksters, especially those who dumped outhouses; the other was the appearance of the season’s first Christmas ads.

In early November 1910, these first ads were modest pitches, often from mail-order companies like Ryrie Bros. in Toronto. It offered readers the privilege of “Choosing Christmas Gifts without Worry.” H.A. Rutherford’s in Bolton (“The Handy Store”) offered “cold snap bargains,” but made no mention of Christmas. And the red and green crêpe-paper decorations that appeared on McClary stoves for sale at Smith and Schaefer’s Hardware in Bolton were quite unobtrusive.

Piling on the pressure

But in the first week of December the soft hints disappeared. “The Greatest Rush of the Year is Now On!” pro-claimed Rutherford’s. Berwick’s store in Shelburne chose the biggest type available in the Economist to announce it could “meet every need for Christmas with Practical Presents at Popular Prices,” adding that “Santa is delighted at the prices!” 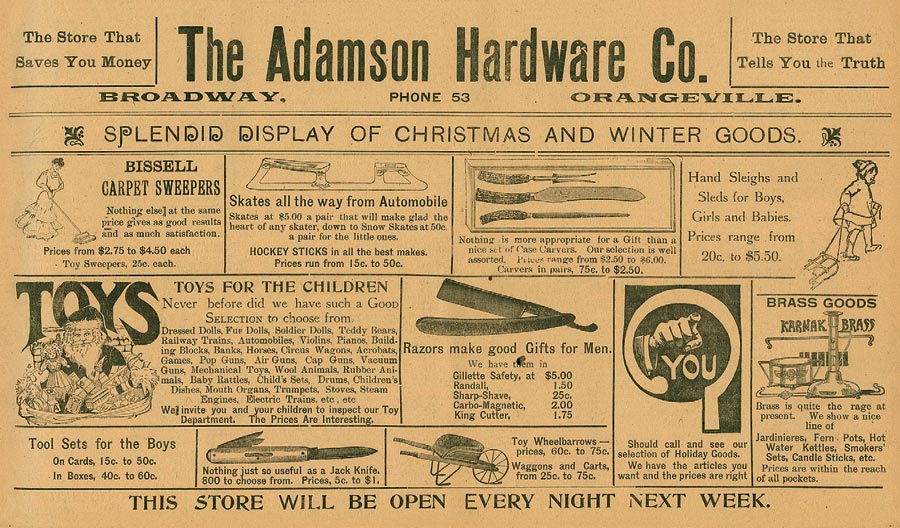 An advertisement in the Orangeville Sun, December 1910. Image courtesy of Dufferin Museum and Archives

In Bolton, Clarke’s store announced “He is Coming!” The “He” was Santa, an allusion that could not have pleased local clergy. (Those same worthies surely raised eyebrows even higher when the ad went on to ask, “Are You Prepared to Receive Him?”)

Bolton’s F.A. Jaffary, knowing that housewives sensitive to their reputations would be thinking about Christmas cake, offered ingredients that will “make your cake as good as your neighbour’s for she buys at Jaffary’s”.

And in Grand Valley, Keith & Co jumped right into a pre-Christmas sale. Keith had been telling readers of the Star and Vidette since November that Christmas was “Just Five Weeks Away!” Lest the citizens of East Luther miss the point, the store kept running the five-week warning until a few days before Christmas.

With six days left before the big day, Hill & Co of Orangeville took a half page in The Banner to offer sympathy to harried Christmas shoppers. It may well have summed up for today’s readers what the season was really like a hundred years ago: “This is a perplexing time of year and every nerve is strung to the highest tension to secure the most suitable gifts for your friends.”

Of course, Hill & Co had just the merchandise necessary to relieve that stress, and offered its staff as gift consultants to any shoppers who needed professional advice to make their ever-so-crucial selections.

Hill & Co’s suggestions were almost all practical items, most often clothing. The same is true for almost every store in the hills. Although it is clear from the ads that gift-giving was a fully hyped feature of the season, any guilt about commercialism was at least partly assuaged by the emphasis on presents that were useful. 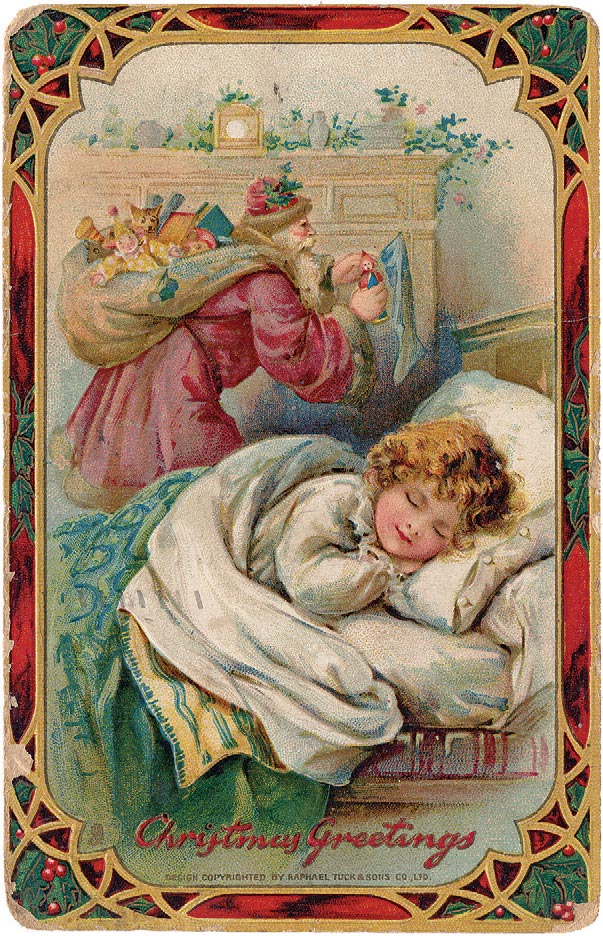 Postcard Frenzy: The popularity of postcards zoomed in the first decade of the twentieth century, for a while even replacing traditional Christmas cards during the holiday season. In December 1910, the owner of Shoemaker’s Drug Store in Bolton, who advertised himself as The Postcard King, told customers he’d sold over 1ooo Christmas postcards the year before and this year had brought in 2ooo for sale. Image courtesy of Dufferin Museum and Archives

On Broadway in Orangeville, J.D. Torrie pushed overcoats (and Stanfield’s underwear “from $1 up”). Berwick’s of Shelburne listed fabrics for home dressmaking. In addition to McClary stoves, Smith and Schaeffer featured a gasoline iron – “the latest thing in ironing” – and in the same ad reminded readers that the store sold furniture, horse blankets, knee rugs and the best selection of mitts in town.

By comparison with today, it’s interesting to note what was not on offer. There were no absolutely-must-have toys for children. Although Adamson Hardware in Orangeville advertised skates from 50 cents to $5 a pair, reference to toys was kept low key in favour of what Hill & Co called “the most acceptable gifts that children can receive: wearing apparel.”

Only the ladies, it seems, merited gifts that approached “frill.” In the bigger stores that meant furs and ruffs and double-ribbed umbrellas, but most of the time, frills were in the packaging. At Rutherford’s store, for example, practical items such as gloves, scarves, arm bands, ties and handkerchiefs were “in fancy boxes.”

The emphasis on “useful” may have presented a challenge for merchants specializing in non-essentials, such as jewellery. However, Bolton’s R.I. Russell was more than up to the task. Mr. Russell was not only a jeweller but an optician, a purveyor of musical instruments, a wedding outfitter and – here was the key – an issuer of marriage licences.

The combination was a clever one because the Christmas to New Year period a century ago was on par with June as the most popular time to get married. By offering a free eight-day kitchen clock to any couple buying rings, a wedding outfit and licence before January 1, Russell turned 1910 into a banner year.

In fact, as the holidays approached, newspapers in the hills were filled with wedding announcements, such as “Double Wedding at Palgrave” (Dec.28); “Pretty Home Wedding in Caledon East” (Dec.26); and “Nuptial Bliss in Mono” (Christmas Day).

In its first issue of 1911, the Orangeville Sun led off its wedding column with a “tie-the-knot” in Orton, and went on to describe seven local weddings on New Year’s Day. Among the reasons for the popularity of weddings at Christmas was that it was an ideal time for families to get together, especially rural families who had more time for celebrating when there was snow on the ground. In this sense, the Christmas of a century ago was “old-fashioned” or at least different. But in almost every other way, the season was more like than unlike the Christmas we know today.

More of the same

For one thing, the world in 1910 carried on as it always had. There was revolution in Albania and Portugal; Premier Ghali of Egypt was assassinated, and a terrorist created havoc in Russia. Marconi won a Nobel for physics, Peary reached the North Pole, and the Montreal Wanderers won the Stanley Cup.

For another, clergymen and columnists continued to wonder whether Christmas had lost its meaning. Reverend Craw at Caven Presbyterian weighed in on the subject. C.W. Mack, the rubber-stamp king from Belfountain, wrote a lengthy essay about it for the Shelburne Economist. And the Orangeville Sun carried a lament about car horns replacing the sound of sleigh bells.

The weather that Christmas also behaved as it always has. In Tullamore there was ample snow for winter fun, but in Caledon East, the St. James Sunday school class had to cut short a sleigh ride because it was just too cold. At Mount Wolfe there was no snow at all.

Bundling is not new

Contemporary telecom companies call it bundling but they were not first off the mark with this idea. A hundred years ago the Orangeville Banner bundled a Christmas/New Year offer and called it “Clubbing.” For $1 readers could renew a year’s subscription to the Banner, but for $2.50 could “club” it with the Toronto Daily Star. The same price would get you the Banner and The Busy Man’s Magazine. And for just $1.50 you could combine the Banner with either The Poultry Review or The Presbyterian.