Goodness Me! What Yummy Pies You Make! Five cups of fruit go into each nine-inch, deep-dish pie.

“Fancy decorations on pies? That’s not me,” says Jean Newell. Now entering her fourteenth year selling Goodness Me! unbaked frozen fruit pies and crisps, Jean has no doubts about how to make her business succeed.

With an energy level that belies her years, Jean manages her shop with a firm and confident hand.

And although her “Goodness Me!” brand name is borrowed from her grandmother – who exclaimed “goodness me!” whenever she liked something – Jean is no stereotypical pie-baking granny.

A teacher by training, Jean soon exchanged the classroom for a sales career. She cut her teeth flogging Tupperware and quickly rose up the ranks until she was the director of sales for Ontario and the Maritimes.

By the mid-1990s, however, the plastic-container company was in difficulty and Jean was let go, though not without compensation. 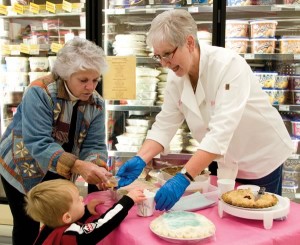 One of Jean Newell’s bakers, Sharon Flood (left), and her grandson Matthew visit Jean at the sampling table at Foodland in Caledon East. Photo by Pete Paterson.

Jean had every intention of retiring gracefully, but fate, or more likely a natural propensity for new challenges, stepped in. She recalls visiting a shop near her Caledon East home and spying the commercial pies they offered for sale.

When she asked the store owner why he sold such pitiful pies, he complained that no one was making homemade ones anymore. Before she knew it, Jean had offered to make some for him.

When her apple pies sold immediately, she received a second order and then a third. So she took some business courses that complemented her considerable sales expertise and found a location for a commercial kitchen. She now employs several local women to bake the pies and sells them through fourteen retailers in the Headwaters region, as well as farther afield.

Jean is very particular about who she lets carry her beloved pies. “Before I sell to a store, I walk around it and listen to how the staff deals with customers.” Only if she is satisfied that they care about the food they sell, will she approach them about stocking her sixteen varieties of regular and premium pies and six varieties of fruit crisps. (She also has a line of pies and crisps made especially for health food stores.)

The stores that sign up receive the customer service of a pro. Jean not only delivers the pies, she carries them into the store, and sometimes even stocks its freezers.

The Inglewood General Store is one of her long-time customers. Laura Banks, the store manager, explains that although Goodness Me! apple pies are the most popular staple with her customers, Jean makes peach pies in season especially for her store. And these, Laura says, fly off the shelves. 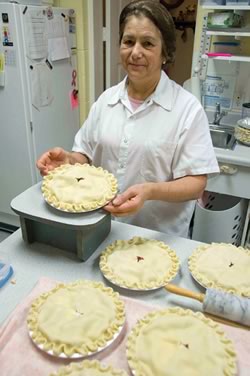 They look and taste like the best homemade pies! Photo by Pete Paterson.

Sheepishly, people often tell Jean that they have passed off her pies as their own, which is easy to do since they look and taste like the best homemade. She packs five cups of fruit into a nine-inch deep-dish shell and uses less than half the sugar called for by traditional recipes, so “you can really taste the fruit.”

The first pies she baked for that local store were apple, and apple pies continue to be her biggest seller, followed by blueberry, strawberry/rhubarb, and then apple crisp. Last year, she used an incredible four and a half tonnes of apples, as well as two tonnes of rhubarb.

Apples are one of the fruits that she can source locally. Mayfield Farms on Dixie Road not only grows most of the Northern Spies Jean prefers, but has them peeled, chopped and frozen when she picks them up. There was a time when she prepared the fruit herself, but those days are long gone.

She readily shared the ingredients in the pastry recipe she was given by the secretary at a school where she taught forty-four years ago. Lard-based, it contains sea salt, baking powder, vinegar, eggs, icing sugar and pastry flour that, she says, results in a soft flaky crust.

She also uses a borrowed recipe for her crisp. It comes from Loretta Perry who owns Caledon East’s Town Fryer fish and chip shop. Jean says, “She gave it to me and then I multiplied the recipe by a bazillion.”

Next up for Jean is her Christmas specialty: mincemeat pie. “My mincemeat is very different,” she says. “My grandmother taught me how to ‘doctor’ it by adding way more apple, extra spice, rum and brandy.”

While her goal each year is to sell at least as many pies as she did the previous year, she also tries not to work all the time. Now 67, she takes five weeks of holidays each year, and keeps her working life flexible enough that she can spend time with her eight grandchildren.

So, will she ever revisit that long-ago retirement plan? Jean says she has been approached about selling the business, but she hasn’t found the right buyer yet. “They have to be passionate about my pies and know how to care for my customers. They have to have the right production facilities too.”

It would be hard to imagine Jean, clad in her starched white chef’s jacket, black slacks and sensible shoes, not heading out on deliveries each week, and not showing up for sampling events at her local retailers on weekends.

Jennifer Grant owns Harmony Whole Foods Market in Orangeville and is delighted to have a local supplier of pies that feature organic pastry ingredients. “Jean’s success,” Jennifer says, “is that she really listens to her customers.”

Freelance writer Nicola Ross lives in Alton and is the author of the bestselling 'Loops and Lattes' hiking guide series.
Show 6 Comments