It’s an elegant old lady, decked out in a fancy hat. Inglewood’s Riverdale Woolen Mill – these days perhaps better known as the Riverdale Fitness Centre – has seen a lot of different uses since Thomas Corbett first established a business on the site along the banks of the Credit River in 1841.

It’s an elegant old lady, decked out in a fancy hat. Inglewood’s Riverdale Woolen Mill – these days perhaps better known as the Riverdale Fitness Centre – has seen a lot of different uses since Thomas Corbett first established a business on the site along the banks of the Credit River in 1841.

While there have been a lot of changes, and a couple of fires, there has also been at least one remarkable constant: the property has now been owned by the Graham family for six generations. In recent decades, it was the home of a family business: manufacturing fibreglass reinforced panels. Though the business was sold and manufacturing moved to Mexico, three-quarters of the floor space is still used as a warehouse and distribution point, leaving room for the gym.

Keeping up with the times, Riverdale is currently in the process of installing a roof-mounted solar array atop their 56,000 square feet of buildings, though there’s certainly nothing new about renewable power generation at the site.

For decades the mill was powered by a water wheel in the nearby river. Early in the depression this was connected to a generator that supplied the community of Inglewood with all of its electricity. That came to an end in the early 1950s, when Ontario Hydro took over power generation and established Alternating Current, or AC power, as the standard. The mill generated Direct Current, or DC power. At the time, the water wheel was in need of major repair, so rather than upgrading the equipment it was simply shut down. 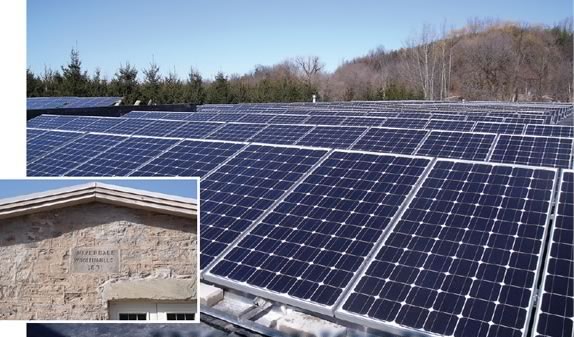 Flash forward to 2011 and Riverdale is getting back into renewable power generation in a big way, though this time from the sun, not the river.

Their system comprises 800 solar panels generating 200 kilowatts, or enough power for an estimated 162 houses. While the installation is not yet complete, and final numbers haven’t been tallied, owner Dave Robertson (his mother was a Graham) says the capital cost will be “well in excess of a million dollars.” He expects the pay-back period to be about ten years.

Riverdale submitted its application under the province’s FIT (Feed-in Tariff) program in May of 2010, after a careful business planning exercise. Along the way, Robertson has gained some practical insights about the ins and outs of renewable energy generation.

Of the seemingly generous rates paid by the province under the FIT contract for roof-mounted solar systems, Robertson explains that it’s not quite as over-the-top as it first appears.

First, he points out that all of the capital cost is subject to the 13-per-cent Harmonized Sales Tax, providing an immediate source of government revenue. On a million dollars, for example, that’s $130,000.

Beyond that, there’s the ongoing revenue from operation of the system itself, all of which is taxable income. “So maybe a third of that money goes straight back to the government too.” And another factor: the development of electrical generating capacity has always been funded by the public purse. “But now, all the capital investment is private dollars,” Robertson says.

Riverdale has also dealt with the reluctance of banks to provide project financing. One dubious banker even asked, “What if there’s no sun?” Robertson responded: “Well, then we’ll all be dead.”

Looking long-term, Robertson sees his system becoming very valuable after “peak oil,” when energy prices are expected to skyrocket. In a true case of everything-old-is-new-again, he imagines the possibility of some day taking the facility off the grid and running his own “Inglewood Light and Power.”

Nearing completion, the Riverdale project finds itself among a growing number of solar entrepreneurs who, despite having made a huge investment, have now been told to expect a delay before they can be hooked up to the grid. However, Robertson remains optimistic it can be sorted out, at least in part because the mill’s industrial background means it already has a heavy-duty, on-site electrical infrastructure.

Robertson’s renewable energy dreams don’t stop there. He also has his eye on the river, pondering what it might take to bring water power back to the mill. Perhaps one day soon the Grahams and their water wheel will be reunited.

Jeff Rollings is a writer in Orangeville.

More related to this article:

LET THE SUN SHINE IN, Solar energy gets personal
by Phyllis Robinson

CATCHING A FEW RAYS, Local initiatives cash in on the sun
by Jeff Rollings