Fishers have been Lured South

Fishers are said to attack porcupines in a particularly grisly manner.

The porcupine, or rather what was left of the porcupine, lay near the base of Murphy’s Pinnacle just north of Primrose. It was a recent kill. The predator had been fastidious; every scrap of flesh had been consumed.

The killer? As you would expect, few predators attempt to tackle porcupines. That is why porcupines have evolved into such plodding, myopic beasts. Little reason to invest scarce resources in speed and acute senses when your body bristles with needle-sharp quills.

No defence is impregnable, however. All creatures, regardless of how effective their defences are, have enemies.

Predators evolve alongside their prey, matching refinements in defence with their own refinements in attack. The particular nemesis of the porcupine is the fisher, a large variety of weasel.

Fishers are said to attack porcupines in a particularly grisly manner. They apparently bite the porcupine repeatedly on its unprotected face. After the porcupine succumbs to this frontal assault, the fisher works its way underneath the porcupine and opens up the quill-less belly. 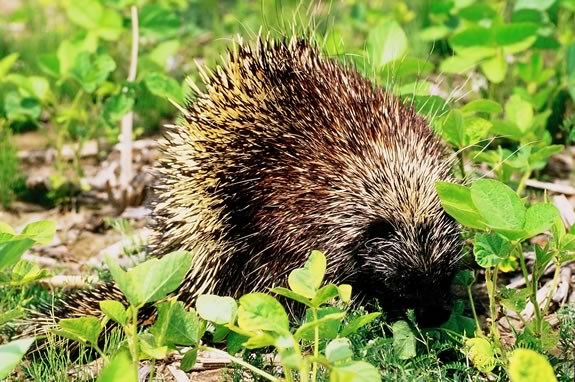 So was the Murphy’s Pinnacle porcupine killed by a fisher? Or was it simply a victim of one of our numerous coyotes, desperate with late winter hunger?

Fishers have been moving south into our region and they have been seen by some Headwaters folks. So I didn’t discount the possibility – a possibility that suddenly became more credible as I was driving home that March day.

I noticed a road-killed animal north of Camilla on Highway 10. Dark, grizzled fur covered a body the size of a house cat. It had a long, luxuriously furred tail – a fisher!

Porcupines have long been common animals here and prey abundance is, of course, a predator magnet. Fishers have been lured south.

The plodding porcupine’s halcyon days are over. Its nemesis has arrived.