Sweet or savoury, chilled soup in summer is as comforting as it is cool.

People say that nothing warms you up like a hearty bowl of soup. Unfortunately this means we tend to avoid serving soup during the hotter months. That’s a shame, because soup is so easy to prepare and such a simple way to get more fruits and vegetables into your diet. Here’s an idea that just might open up a whole new culinary world for you. This spring and summer, try beating the heat with some refreshing cold soups.

Cold soups are fabulous on a hot day as a light lunch, an addition to a barbecue dinner, or as the first course of a gourmet meal. A delightful way to showcase the local summer harvest, they can be made with vegetables or fruits, cooked first and chilled, or made from raw ingredients and chilled. 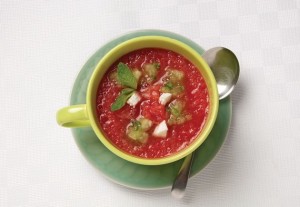 I then tried my hand at the French vichyssoise, a cook-and-chill soup that is simply potato-leek soup served cold. Also delicious. From there I began experimenting with other cold soups. Some of my favourites include springtime stinging nettle, mid-summer cucumber-dill with yogurt, and late-summer roasted red pepper, as well as Springtime Spinach Vichyssoise and Chilled Watermelon-Mint Soup.

For cold soups I prefer to use a vegetarian base rather than chicken or beef stock, because it gives the soup a lighter taste. Making your own stock is easy and much healthier than buying commercial soup stock with its high sodium content.

To save time, I have learned to build the base of vegetable soups as I go. For cooked soup, the first step towards achieving a full flavour is to combine chopped onions, carrots and celery. This trio is well known in the culinary world as a base for sauces, soups and stews. The French term for it is “mirepoix;” the Creole call it “the holy trinity;” and the Italians say “soffritto.”

To this medley, I add other aromatics such as chopped garlic, fresh herbs such as basil, oregano and thyme, and spices such as cinnamon, cumin and cayenne. I find that adding mushrooms to the mix helps to give the soup a fuller taste. To maximize flavour, I add some salt and cook the mixture over low heat for about 25 to 30 minutes, letting the vegetables fully release their juices into the soup pot. This process is known as “sweating.”

Once the vegetables are soft and their juices released, the other ingredients and water can be added to the soup pot. Bring the soup to a boil, and then simmer over low heat for at least 30 minutes. I often try to make soup a day or two prior to serving in order to let the flavours fully develop.

When it comes to cold soups made from raw ingredients, a soup base is not required thanks to the flavours of the uncooked fruits and vegetables. Raw soups are very refreshing and work particularly well with fresh local fruits. They are so easy to make, with such intense, fresh flavours, you will wonder how you ever got through summer without them. 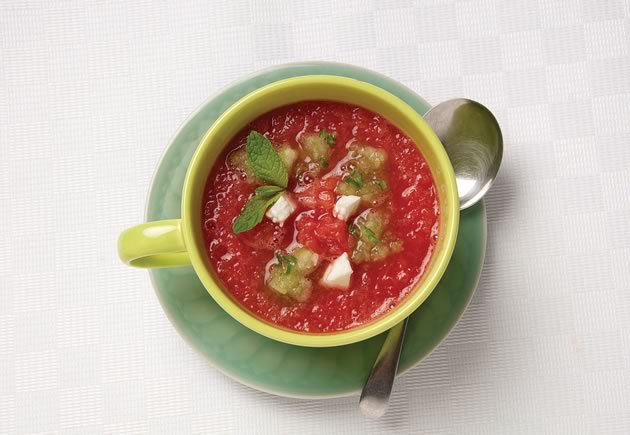 This recipe is based on a classic salad created by the eminent French chef, Jacques Pépin. 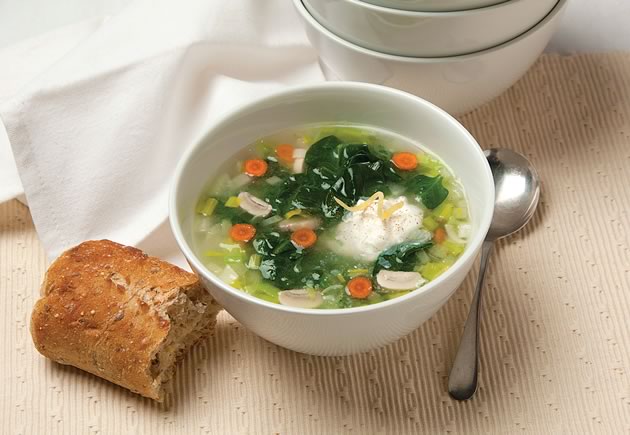 This soup is a variation on traditional vichyssoise, a cold potato-leek soup.