Valley of the Bees

When Dan Garyfalakis gave his wife Nina two beehives as a gift almost five years ago, little did he know that the rolling hills and meadows of Hockley Valley would turn out to be a source of liquid gold. Organic honey, like fine wine, depends on “terroir” for its character and complexity, and the Garyfalakises discovered they were living in a unique environment within the Niagara Escarpment and the Nottawasaga River valley featuring a rich variety of nectar-bearing flowers and trees.

What began as a hobby has burgeoned into an award-winning passion. Today, with 90 hives scattered among strategic sites throughout Hockley Valley, the Garyfalakises produce five different types of honey, including early season Liquid White (soft scents of pine, lilac, dandelion and black locust flower), late-summer Golden (sweet aromas of cut grass and the first hints of crisp autumn aspen and sugar maple), late-season dark Amber (hints of goldenrod and purple aster), and two varieties of their silken creamed honey. 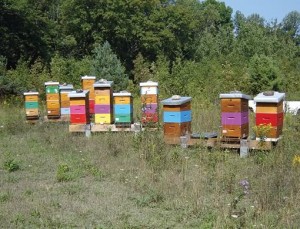 One of the requirements for organic certification is that all hives must be constructed of new, natural materials only. Photos courtesy Dan Garyfalakis

Hockley Honey is certified organic by EcoCert – one of several certification bodies in Ontario – according to strict standards. Organic certification is the subject of controversy among some producers, who point out that there is no way of controlling bees’ foraging habits. Still, like other beekeepers pursuing organic methods, Dan works very hard to make sure his honey is free of man-made chemicals and toxins.

Dan and Nina report that the comment they hear most often is: “I haven’t tasted anything like this in years.” Dan insists this is not just sentiment. This is honey that rivals the honey Nina remembers from her childhood in Switzerland, where, as a little girl in pigtails she played in the flowering coniferous forests near the Jura Mountains as her grandfather tended his beehives. If you could bottle bliss – the softly warming earth, the cool shade of a deep pine forest – this would be it.

Why does Hockley Valley honey taste so good? Dan says it’s because over the past 50 years most bees have been dependent on commercial agricultural crops for nectar and pollen. Eighty per cent of the time that means they are collecting pollen from monoculture crops, such as canola and corn, that have been sprayed and/or genetically modified. The result is a lack of complexity in what the bees amass and honey that may have been exposed to the very toxins that are suspected of contributing to the precipitous decline in bee populations around the world.

Harvesting an organic product from bees, which can’t be contained like chickens, is no simple feat. Organic certification requires that hives must be located on sites that have a six-kilometre buffer zone free of crops that have been sprayed or are genetically modified. “Our bees,” says Dan, “collect natural nectar and pollen, feeding on wildflowers and natural tree blossoms exclusively.”

The hives themselves must be constructed of new, natural materials only. Hockley Honey Farm bees live in handmade hives. “We do not use any plastic components common to commercial operations,” says Dan.

As well, the Garyfalakises do not treat their bees with antibiotics or chemicals to prevent disease or control mites, and that means inevitable losses of hives and smaller yields than conventional producers. It can, some days, feel like a state of siege: beekeeper and bee against climate, microbe and mite. And of course, all Hockley Honey is raw, which means it is unheated, unfiltered and has been produced with a minimum of human and mechanical intervention.

Unless you count the airplane. 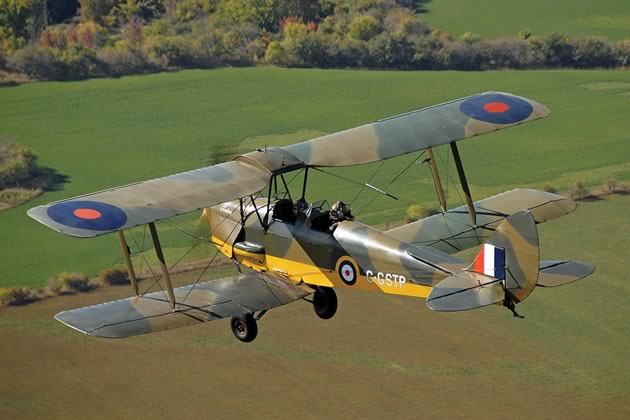 Dan, who is a licensed pilot and sits on the board of the Edenvale Classic Aircraft Foundation, uses a World War II Tiger Moth biplane to conduct air searches of Hockley Valley and surrounding area, looking for large isolated areas free of commercial farming. Then begins the long process of knocking on the doors of landowners in optimum locations to ask if they will consider having hives on their property.

“It usually only takes one knock on the door,” says Dan. Most of the people Dan and Nina approach are happy to host hives, some of them remembering when their property had once had beehives, or a relative who kept bees.

“Being organic beekeepers in Ontario is turning out to be a huge undertaking,” says Dan, “with little or no support and many trial and error discoveries. Our ingenuity is being challenged to the max; our learning curve is steep.”

For instance, Dan says that while conventional producers use chemicals to remove bees from the honey frames so they can collect the honey, he and Nina blow the bees out using a modified leaf blower.

Getting equipment into the remote sites of their hives has also proven to be a challenge over the years. Now Dan and Nina use a small four-wheeler fitted with a special platform to hold three boxes of honey to trek across the uneven terrain and narrow bridges that lead to many of their sites. 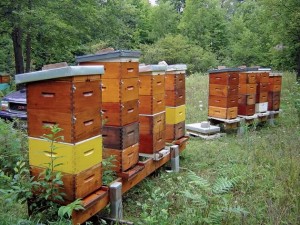 Then there are what Dan refers to as the “many expensive fires.” The couple has had to burn hives after one of beekeeping’s nastiest diseases, American foulbrood, spread to their hives after coming into contact with sick bees from other hives. The only way to treat the disease is with antibiotics, which the Garyfalakises never use.

Still, the couple believes it is worth it, that the excellence of their honey speaks for itself. A quote from Cesare Pavese, a 20th- century Italian poet, hangs in their kitchen. “We do not remember days, we remember moments,” it reads. And then, “The richness of life lies in memories we have forgotten.”

For the Garyfalakises that richness is represented in the beehives scattered throughout the forests and meadows surrounding their Hockley Valley home.

Late summer and fall honey. The same bees and location that produce white honey except that the bees feed on different wild flowers in hotter, dryer conditions. The roots of the plants go deeper and more minerals are absorbed.

Depending on the year, weather and wildflower abundance, a darker amber honey comes from mostly goldenrod and purple aster flowers.

Cinnamon combined with creamed honey is a 2,000-year-old recipe used by the Egyptians for medicinal purposes. The best organic cinnamon from Indonesia gives this honey an outstanding taste.

Where to buy Hockley Honey

Hockley Honey is available in Hockley Village at Hockley General Store; in Orangeville at Pia’s Bakery, Dave’s Butcher Shop, Dragonfly Arts, and Aardvark Music and Culture; in Erin at What’s Cookin’; in Belfountain at Tammeron Centres for Wellbeing; in Mansfield at The Olde Stanton Store; in Creemore at The 100-Mile Store; and in Caledon at Heatherlea Farm Market. For more information, visit hockleyhoney.com.

Monica Duncan is a freelance writer who lives in Adjala.
Show 3 Comments

For more information about beekeeping

EcoCert – one of several organic certification bodies in Ontario.