A Day in the Life of a Volunteer Firefighter

A simple “click” is sometimes all it takes. Somebody is having a bad day. That “click” is the emergency radio channel, XJI 799, coming on line.

A simple “click” is sometimes all it takes. Somebody is having a bad day. That “click” is the emergency radio channel, XJI 799, coming on line. A toned coded alarm activates the hip pagers of 29 men and one woman, who are all now in an adrenaline-charged state of alertness.

I grab my car keys, step into my shoes and I’m out the door. With no time to warm the engine, I throw the car into drive, and I’m on my way to the fire hall. This usually takes about three minutes, but on a night like this, half that time would seem too long.

Inside the fire hall, it’s a flurry of activity. Firefighters getting dressed, some calling out directions and truck assignments. On the apparatus floor, diesel engines are coming to life, the usual quiet darkness of the hall now replaced with the flash of red and white lights, and the sound of diesel engines. Truck doors slam shut, air brakes release. In only a few seconds, I’ve gone from jeans and a t-shirt to full firefighting bunker gear.

Striding across the floor, I grab the polished handrail of Pump 34 and climb aboard. Closing the door behind me, and settling into one of the open jump seats, I can see the bay door opening through the front windshield.

As the truck cautiously exits the hall onto the road, all hopes for a false alarm are dashed. A massive orange glow is visible from almost 10 kilometres away. 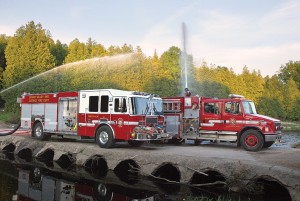 Pumps 34 and 32 on a practice exercise. Photo by Brandon Muir

Lights flashing and siren screaming, Pump 34 arrives on scene only minutes later. The crew dismounts and immediately sets up for a rural fire pumping operation, one we’ve practised and performed countless times before. The commanding officer is approaching the burning house, calling out his orders on the two-way radios.

“Grand Valley Base, Pump 34 on scene, 311 in command. Fully involved house fire, heavy fire showing from all windows. Pump 32 set up for pump relay. Tank 35 drop your tank at the rear step of Pump 34.”

All firefighters on scene have specific duties, all designed to contribute to a larger team operation. Some are reporting to command for suppression duties, others are dragging portable pumps down to the nearby river.

Generators fire up; massive halogen floodlights illuminate the scene with stadium-style lighting. The property owners, safely out of harm’s way, are walking down the driveway, accompanied by an OPP officer. An ambulance arrives and stages on the road, just in case.

As I walk toward the fire, along with my assigned crew, the heat is getting intense, even through my fire-resistant gear. Flames are shooting almost 75 feet into the air, smoke and heat tornado from an upstairs window. Water from the 65mm hoses turns to steam even before it reaches the seat of the fire, evaporating instantly in the 1000°f temperature. 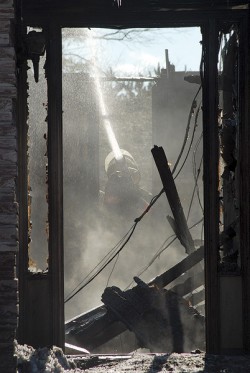 In only a few minutes, the entire structure begins to collapse, the roof falls into the walls in a massive eruption of fire and smoke. In spite of our best efforts, unfortunately, this one is long beyond saving.

The volunteer fire service in Grand Valley started in much the same way as in all the small towns and villages in Ontario. In pioneer days, all available members of the community were expected to help out at the scene of a fire, doing whatever could be done to minimize the loss.

By the early 1950s, a group of Lions Club members recognized the need for a more organized department, and official helmets and boots were purchased for the members. Used trucks were acquired and basic training was provided.

Today Grand Valley Fire is a state-of-the-art volunteer department trained to the Ontario Fire Marshall curriculum standards, using equipment and trucks even some career departments would envy. Members train weekly, attend courses and seminars throughout the province, and respond whenever possible, whenever our pager beeps.

I joined the volunteer service in 2001, following in the footsteps of my father. The members all have their own reasons for joining. Some use it as a stepping stone to a full-time career; others just enjoy the brotherhood and the camaraderie that goes with the job. Others join after moving to the community as a way to meet people.

A young man is driving across Dufferin Road 109, in just a few minutes time he will be on his back deck, enjoying the afternoon. From the other direction a driver is heading east in a minivan, thoughts of the upcoming weekend on his mind.

A cell phone rings, and in the half second it takes for the driver to reach over and pick it up, the two cars meet head on in a violent explosion of screeching tires, twisted metal and broken glass. The two vehicles fly apart after the collision, ending up almost 50 feet away from each other.

Witnesses to the wreck immediately start calling 9-1-1. Computers and phones link up, and our pagers start to beep.

Often for me car crashes are the hardest to deal with, because the severity can go from minor fender benders to serious head-on collisions with critical injuries. And often it is impossible to predict what might be waiting for us; we have to get on scene for any indication about what needs to be done. 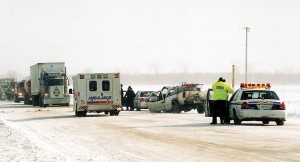 Crashes like the one on Dufferin Road 109 involve many different agencies, including the police and paramedics. Our job is to stabilize the cars, provide any fire suppression or prevention that is required, and then extricate the victims from the cars, so that advanced life support can be applied, and all patients transported.

Ironically, modern safety features built into cars have made this job incredibly difficult – there are literally hundreds of options when it comes to side impact beams, airbags and dent shock absorbers, all which can prove fatal to rescuers if an unexpected rupture or activation should occur.

As a general rule, for seriously injured victims to have a good chance of survival, they must be in the trauma centre of a major hospital within one hour of the crash. With some extrications taking 45 minutes or more, that doesn’t leave much time for patient transport, even if an air ambulance is used.

We’ve served in Ontario for 10 years as a volunteer firefighter, for a few different departments. In that time I’ve been to house, barn and car fires, assisted paramedics with medical calls, worked at several major car accidents, and was once even called to rescue a drowning horse.

There truly is no such thing as a routine call, and the abilities to think on the fly and to react and adapt to a constantly changing environment are critical. Firefighting is an ultra-hazardous job, and the dangers are always present, regardless of what type of call we are on.

Firefighting is a team effort; no one does anything without at least one partner. People ask me if I’ve ever saved someone’s life, and I always respond, personally no, but I’ve definitely been part of a crew who did.

Unfortunately I have also been on the other end of that equation – I’ve worked hard to rescue someone only to have him or her pass away later on that night. It’s times like these that we all question our efforts, and ask if there is something we could have done better or faster to change the outcome. 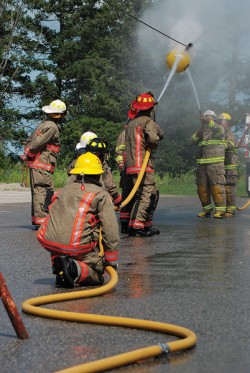 The first time that happened to me it took a while and some support from both the fire department and my family to accept what had happened. Luckily, I have experienced many more good times, where we successfully saved a house from fire, extricated a crash victim in time and, because we work in Grand Valley, rescued someone from the rising flood waters of the Grand River during the spring run-off.

Joining the fire department has also been a great social experience for me. After moving to Grand Valley, I knew the fire department would be a good way to meet members of the community, and in the five years I’ve been here I’ve already formed friendships both locally and throughout Ontario that will no doubt last a lifetime.

Such friendships are especially important when, from time to time, we are exposed to sights and scenes that scar our memories. Talking them through with our buddies is often the best way of coping.

Even though the men and women who go into the emergency services may learn to handle stress better than the general public, we’ve all had one call that we can’t shake. It may involve a child similar in age to our own, or some other injury or death that likewise strikes too close to home.

Often while the call is happening, there is just no time to be affected; however, as days or even weeks pass, the symptoms might appear, and it’s often our friends or family who first notice them.

Being on call 24-7 also poses its own set of problems, as the calls rarely come in at “perfect” times. Often it’s a dinner with family that gets missed, or a child’s hockey game. Other times it’s in the dead of night or, predictably, as I sat down to type these very words!

Our families understand the commitment and generally go along without complaint. Some members have even trained their small children to help, by running for the car keys when the pager goes, for example, all in an effort to get out the door faster.

Volunteer firefighters provide an invaluable service to their communities day in and day out, helping people in times of trouble and tragedy. Occasionally that service comes at a heavy price. 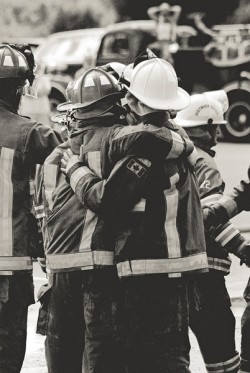 The brotherhood that bonds firefighters worldwide. Photo by Brandon Muir

As I was writing these words, behind me hanging on my basement door, my formal dress uniform, recently cleaned and pressed, was ready for the trip to Listowel the next day for the final service for volunteer firefighters Kenneth Rae and Raymond Walter. Both were killed in the line of duty while working at a large commercial fire in downtown Listowel on March 17. The funeral was attended by about 8,000 firefighters, all of them part of the larger brother and sisterhood that is the firefighters of Ontario, and indeed the world.

Every day across the province thousands of volunteer firefighters go about their lives, working at their careers, playing games with their kids, eating dinner with their families, or relaxing in front of the TV – but they all have one ear tuned to their pager, waiting for the inevitable “click” that tells them once again there’s a job to do.

With red lights flashing, sirens screaming, and the roar of a fire truck hitting the road, these men and women carry on the centuries-old tradition of helping a neighbour or lending a hand to a stranger in need.

About the Author More by Brandon Muir

Brandon Muir has served in Ontario for 10 years as a volunteer firefighter.
Show 2 Comments