five artists | five subjects | twenty-five paintings
How many ways are there to paint a picture?

In the small hamlet of Mono Centre there stands, barely, an old drive shed. The building is nothing if not rickety and even between its owners, Gary and Sharon Bonikowsky, there is a debate whether it qualifies as picturesque or simply an eyesore. Either way, it’s very insistence on remaining vertical against time and gravity has earned it an affectionate reputation as a local icon.

While Sharon rolls her eyes, Gary champions the structure, and his enthusiasm was recently vindicated when a Toronto fashion house used it as a location for a photo shoot. His insistence on its merits will be buttressed considerably more this summer during an intriguing art show at Dufferin County Museum.

The old drive shed forms the inspiration for five of the twenty-five paintings created for the show by The Flaming Spirit Artists.

Last year, the group of five artists – Shirley Bartlett, Lillian Kletki, Jean Mull, Carole Sisto and Luella Thomson – set themselves a challenge: How many ways are there to paint a picture? Their goal was to create a collaborative project that would showcase individual artistic interpretations of the same subject. 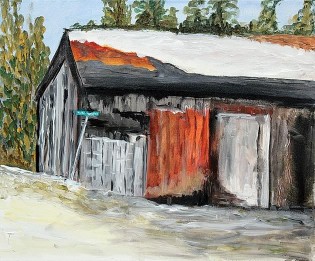 For one of them, there was no question that the texture, history and spirit of the old drive shed made it a worthy candidate for the endeavour. The other four artists also chose a subject and supplied the group with a photo of it. Each artist then set to work to create five paintings, one for each of the chosen subjects.

The twenty-five paintings that resulted will be exhibited throughout July and August in a show called “5 by 5” in the museum’s Silo Gallery. The works inspired by each of the five subjects range from realistic to abstract, and they are represented in a variety of media, including cold wax, original prints, oil, acrylic and mixed media.

Membership in the Flaming Spirits has evolved over the years, but the five current members have been together for twelve years. All work from their home studios, but meet regularly, not only to share their own painting experiences and experiments, but to travel together to local and national galleries and shows in Canada and the United States.

They have also regularly mounted their own group shows, notably in recent years amid the greenery and antiques at Orangeville Flowers.