The traditions of the annual agricultural fair were brought to Canada by British settlers. 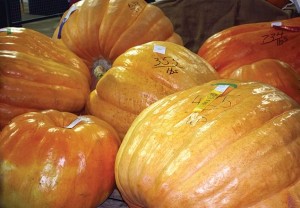 Being a giant-pumpkin grower, “takes more work than having a baby,” says Debi Clare. Photo by Liz Armstrong

What better way to honour the bounty of a Headwaters’ harvest than with a visit to the fair?

When asked what compels her to enter the garlic she grows at her Glen Williams farm in the Erin Fall Fair’s annual “homecraft” competition, comedian and playwright Sandra Shamas deadpans: “It’s for the money!” Her cumulative winnings for taking first place in 2009 and 2010 added up to eight dollars. Then, in a tone flirting with being serious, she adds, “I’m very close to wearing the red ribbons that I proudly display on my fridge.”

The homecraft competitions at agricultural fairs may be a throwback to the “olden days,” but those who enter these annual contests take pride in their entries – and in how they place. And should you be a giant-pumpkin grower, something that Debi Clare, organizer of the Erin Fair competitions, says “takes more work than having a baby,” you pay attention to the prize money too.

If the tradition of the annual agricultural fair seems to have been around forever, that’s because it pretty much has. In the Headwaters region, Erin celebrates its 161st fair this year, Orangeville its 157th, Bolton its 154th, Caledon its 151st, Shelburne its 145th and Grand Valley its 137th. All of them, except Grand Valley, began before Canada became a nation in 1867.

British settlers brought the idea with them to Canada, and these annual gatherings soon became popular social events for Canadian farmers. Associated with agricultural societies, which were supported and fostered by the Canadian government, the fairs helped farmers learn about new techniques that would increase their prosperity. At one time, according to Guy Scott, past president of the Ontario Association of Agricultural Societies, there were more than 500 in the province. 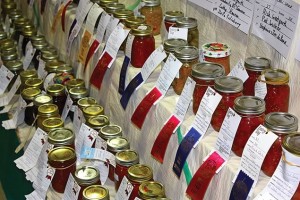 Homecraft classes can number in the hundreds. Photo by Liz Armstrong

Today, about 230 towns and cities become colourful spectacles for up to four days when their fairgrounds vibrate with Ferris wheels and bumper cars, fill the air with the aroma of corn on the cob, baked potatoes and sweet fudge, and wow the crowds with horse pulls, livestock competitions and homecraft contests in which participants show off their home-baking, preserving, quilting, knitting, flower-arranging, art and even photography skills. Homecraft classes can number in the hundreds, and for most local agricultural fairs, the entries keep pouring in from long-time regulars who tend to be the prize winners, as well as from newcomers who see these competitions as a way to get involved in their communities.

In terms of food for human consumption, classes range from Sandra Shamas’s garlic category to giant pumpkins (minimum weight 250 pounds) and other fruits and vegetables, to preserves and baked goods. At the Orangeville Fair, for example, cucumbers are judged in four categories (pickling, regular, seedless and English), and despite having eight separate classes for potatoes, Karen McClellan, the Orangeville Fair facilitator says, “Probably, we could add to those [potato classes] these days, given all of the heritage varieties that have come back.”

With so many classes to choose from, Trudy Burnside, director of the Bolton Fair’s junior division, uses the opportunity to learn to make something new. When she saw a preserved fruit cocktail class, she entered it because she’d never made one before. Trudy, who has won Bolton Fair’s high-point baking cup “at least twice,” makes the competition a family affair. Her daughter Jeanette, 15, has won the junior baking cup three years in a row, and her son Carter, 12, is intent on dethroning his big sis.

Erin’s Denison clan also has multiple entries. John submits his smoky rich maple syrup, and wins prizes sometimes. For years, Jean Denison was the “carrot cake queen.” But when she lost her title, she switched to date squares made from a recipe she borrowed from her mother. “The trick,” says Jean, “is to use margarine.” One year, Jean recalls finding her then 20-year-old son John Wesley making chilli sauce in the middle of the night to top up his entries.

Agricultural fairs were helped along by John Graves Simcoe, Upper Canada’s first Lieutenant Governor. In 1792, he helped organize the Agricultural Society of Upper Canada because he believed Canada would be an agricultural nation. These organizations used a variety of means to educate farmers, but, as Guy Scott wrote, “Industrial exhibitions and festivals came and went, but fairs just carried on.” In the 1930s, the Erin Fair, long considered to be the “preview to The Royal [Winter Fair]” because of its size, age and late date on Thanksgiving weekend, boasted attendance records that exceeded the township’s total population. And it did that even though, in respect for the Sabbath, it shut down on Thanksgiving Sunday.

These days, fairs remain open on Sundays, and have made other concessions to modern times. At some fairs, tractor pulls and demolition derbies have replaced the traditional heavy-horse pull. The Caledon Fair moved to a weekend in June because its small size made it unable to attract a midway on its traditional September weekend. At the Bolton Fair, bread made in a bread-making machine is one of the most popular classes these days, and it’s popular with men as well as women.

Getting kids involved is an ongoing challenge. Junior classes that appeal to children are meant to teach them about food and farming. Orangeville Fair hands out prizes for three cookies or a cake baked in an Easy Bake oven, and toddlers under four can enter a necklace made from edible material. There’s even a peanut butter sandwich class for Erin kids. But juniors beware: one young girl who entered her cornbread on the urging of a fellow contestant, received second prize despite being the only entrant in her class.

June Switzer, a grand dame of the Erin Fair, is a long-time judge (and regular winner, best known for her cinnamon buns). She explains it’s not uncommon for a single entrant, such as the young cornbread baker, to place second. Sometimes, they don’t place at all since entries have to meet a certain standard to get a ribbon. Baked goods usually make the grade, says June, but preserves can be a problem if they aren’t sealed properly. When asked if she has ever had to spit things out, June says not often, explaining that her nose usually warns her off first.

In addition to being palatable, one of the key rules in the baking classes is that mixes are not to be used unless the class specifically calls for one. “It’s not easy to tell if people are using one,” June admits, adding, “It’s amazing how people can ruin a mix.” 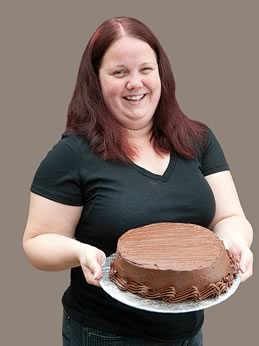 Jessica has been using this recipe for the Erin Fair since 2005, taking first prize three times. Photo by Pete Paterson

Wayne Parkinson, who farms just outside Erin, has a different reason for getting involved in the competition. In order to encourage more entries, Parkinson recently donated $100 for the Fully Decorated Cherry Pie class, but he made his donation contingent on his getting to keep (and eat) all of the entries.

Proving that everyone loves homebaked goods, the Erin Fair added what is formally referred to as The Café at The General Store, but is best known as “where the ladies make the apple dumplings.” It was June’s sister, Carol Reid, who came up with the idea one year when the Erin Fair theme was apples. Now, over the four-day fair, the ladies sell more than 2,000 apple dumplings, many of them slathered in hot caramel sauce.

“The night is not long enough to tell you how many things I’ve entered in the Erin Fair,” says Jean Denison. And yet, despite 40 years of competition, she’s still considered a “junior” in comparison to people like June Switzer. But these “rules” don’t apply to Jessica Lacombe. Only 29 years old, Jessica says she’s been entering baking contests at the Erin Fair for over 20 of them. And when she says she enters, Jessica isn’t kidding. This Hillsburgh resident takes three days off work each fall so she can enter all 42 baking categories. When asked what her best result is, she hesitates and then explains, “I generally judge my success by what I don’t place in.” Her skill has been passed down from her grandmother to her mother to her. “I love to bake,” says Jessica who works full time as, you guessed it, a baker.

For all the fall fairs in Headwaters

check out What’s On!

In the Headwaters region, Erin celebrates its 161st fair this year, Orangeville its 157th, Bolton its 154th, Caledon its 151st, Shelburne its 145th and Grand Valley its 137th. All of them, except Grand Valley, began before Canada became a nation in 1867.