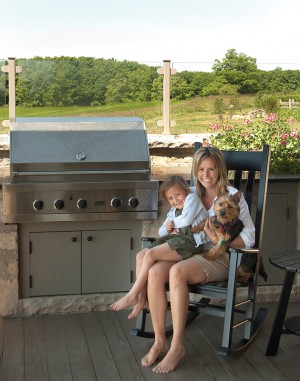 Sara Bellamy, a mother of three children, aged 10, 8 and 5, and owner of a spunky Australian terrier named Raffi, would rather be out playing or working in the garden. Photo MK Lynde

Because her weekends are precious, Sara Bellamy wanted the kitchen at her Mulmur Hills country retreat to more or less take care of itself. The mother of three children, aged 10, 8 and 5, and owner of a spunky Australian terrier named Raffi, would rather be out playing or working in the garden than clearing the breakfast debris left by the friends and family who visit often.

But the grand stone house she and her husband completed in 2009, set high on a hill with magnificent views of the surrounding countryside, presented more than a few challenges when it came to kitchen design.

“I wanted everything to be open-concept,” says Sara, who designed the space herself, “but you run into the problem of what to do to hide the kitchen mess.”

Living room, dining area and kitchen in the light-filled house co-exist in one long continuous space with a floor-to-ceiling stone fireplace at one end, a trestle table and chairs in the middle, and Sara’s dream kitchen at the other end. In most open-concept plans, dinner guests are subjected to the inevitable disorder created by the preparation, serving and cleaning up of a special meal. Sara solved the problem by creating not one, but two kitchen islands.

Sara refers to the centre island nearest the stove as her “prep area.” Covered in Carrara marble that has been pre-treated to give it a distressed or antiqued finish, the 8 ½-foot by 4 ½-foot prep island features a single stainless-steel sink for washing produce. “This is where I do my cooking,” Sara says. Behind her, in a well-lit alcove that is a nod to the walk-in cooking areas of pioneer farm kitchens, is a six-burner Wolf gas stove with a built-in griddle and two – one large and one small – lower ovens.

“Another challenge,” says Sara, “is that because the space is so open the kitchen has no walls, no place for mechanicals or storage.” But the builder, John Gordon (JW Gordon Custom Builders, Creemore), solved the problem by adding generous cabinets flanking the stove for storing dishes and pantry. To the right of the centre island is a large side-by-side Thermador refrigerator disguised as more cabinetry.

The second island, this one covered in Cambrian black granite that has been honed and antiqued, is Sara’s “wash-up area.” Here, hidden by a raised counter facing the dining area, Sara can stack dirty dishes out of sight and out of mind until the party is over. The wash-up island boasts a porcelain under-mounted double farm sink and a built-in dishwasher. In the backside of the prep island, she installed a “dishwasher drawer” for all those extra glasses that need washing when there are lots of people around. 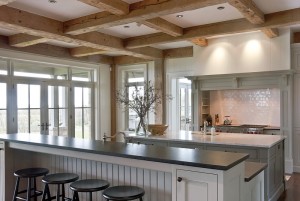 A well-lit alcove with a six-burner Wolf gas stove with a built-in griddle and two ovens. Photo MK Lynde

Both islands boast generous drawer and cupboard space so everything is concealed but close at hand.

“When we entertain, it’s fabulous,” she says of the innovative design. “This is the country so we’re always casual. I usually put a buffet out on the centre island and let everyone help themselves.”

And because her guests and family all seem to get up at different times in the morning, Sara has added a small morning coffee pantry just off the main kitchen. “I set up the coffee maker and put out some juice. On the centre island, there’s a toaster, fruit, bread and yogurt.”

For summer entertaining there is another kitchen outside on the wide veranda. It boasts a gas barbecue, built-in cabinets and more Cambrian black granite countertops. The al fresco cooking area is protected from the considerable winds characteristic of this hilltop aerie by glass panels mounted on substantial stone walls.

“Because this is a John Gordon kitchen,” says Sara of the interior’s high ceilings, “we wanted beams.” John Gordon, who is known for his beam work, sourced the beams from a London, Ontario barn. “John has really good taste,” says Sara, who has worked with the Creemore-based builder on other kitchen projects in the area. With its clean lines, Shaker-style cabinetry and soothing palette (the cabinets are Benjamin Moore Sandy Hook Grey – “My secret colour,” says Sara), the kitchen might be described as country contemporary.

“It just works,” Sara says. “It’s functional and fun. Without fail everyone ends up jammed in here. I’ve got those two couches out there,” she says, pointing to the living room, “but they’re usually empty.”