The little project that grew

Seven of the 20 individual plots have been rented for $25 each by area residents who want fresh vegetables. 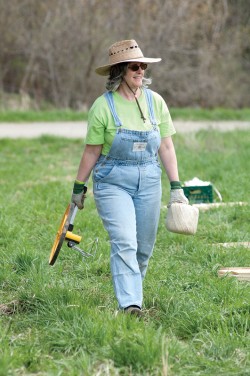 Forty-five dedicated green volunteers dressed to till showed up on a mild and overcast Saturday morning in early May. Photo by Pete Paterson

‘The Farm’ in Albion Hills is more than just a vegetable garden. In the words of one intrepid gardener, ‘It’s community, activity, therapy and food’ If you plant it, they will come. And come they did, in droves. Forty-five dedicated green volunteers dressed to till showed up on a mild and overcast Saturday morning in early May to help launch the new Albion Hills Community Farm near Palgrave.

Men, women and children armed with rakes, hoes and spades dug into the 20 personal plots and four large ones that make up what is known simply as The Farm. Add this to the town’s Community Kitchen, located in the basement of the United Church, and Palgrave stands out in the region as a local-food Mecca.

The Farm, a non-profit, 37-hectare farm and learning centre, is run by Deanna Coop, who describes the venture as “a destination for local food and farming in Caledon, showcasing innovation in sustainable near-urban agriculture.” She adds, “Our farm will be a working landscape of farmers, community members, educators and youth who demonstrate and learn new ways of producing food using ecological and organic growing methods.”

The Farm is the brainchild of two local foodies: Karen Hutchinson, executive director of the Caledon Countryside Alliance, an organization that promotes local food through Eat Local Caledon, and Barb Imrie, who made Palgrave’s community kitchen a reality.

“The number one thing is having people understand their connection to dirt and their food,” says Barb. “Maybe even more, I want them to understand how much work is involved in farming. People don’t realize how cheap food is.” 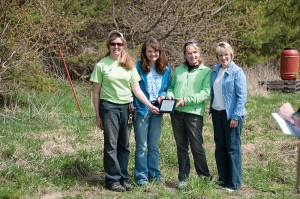 That message was brought home at the May launch as volunteers rolled up their sleeves and sowed early crops of potatoes and peas. They were also able to celebrate the news that the project had received a $300,000, four-year grant from the Ontario Trillium Foundation, enough to cover Deanna’s salary, pay for some farm equipment, and hire a farmer to help tend the vegetable patch over the summer.

Seven of the 20 individual plots have been rented for $25 each by area residents who want fresh vegetables but can’t or don’t want to garden in their own backyards. Palgrave resident Carol Good says she has planted about 40 potato plants in her plot. She wanted to keep them separate from her backyard tomatoes because growing the crops together can make the potatoes more susceptible to blight. “The Farm,” she says, “is community, therapy, activity and food.”

The five large plots are being used by organizations: the Peel 4H Garden Club, Seeds of Diversity, Etobicoke Outdoor Learning Centre/Albion Hills Field Centre, World Crop Learning Garden and the Palgrave Community Kitchen. The Community Kitchen, says Barb, is planning to use much of its harvest in a community dinner in the fall.

On the May long weekend, a “potato mob” returned to the site and planted an additional 10,000 potatoes (Yukon, red, blue and purple). Three thousand pounds of these spuds will be sold at farmers’ markets in Inglewood and Bolton, as well as at an on-farm market. Sunflowers, greens, beans, peas, carrots, beets and several varieties of squash, including more than 2,000 pumpkins, will also be for sale. In addition, the produce will be used by Albion Hills Conservation Area to feed groups using its facilities.

Seeds of Diversity is a Canadian volunteer organization that conserves biodiversity and traditional knowledge of food crops  and garden plants. Its plot is sewn with 24 varieties of potatoes supplied by the Reid family in the Town of Mono. Similarly, The Farm has planted “open-pollinated” (that is, not hybrid) corn (aka maize) that will not only make good eating but will provide seeds for next year’s crop. There will also be a maze where kids visiting The Farm can play while their parents garden.

Of course, all that work deserves a party. On Saturday, September 10, from 1 to 4 pm, The Farm will celebrate its grand opening, dubbed the “A’maizing Harvest Party.” There will be music, refreshments and prizes for the best and biggest veggies. Barb says everyone is welcome and she promises an “a’maizing” time.

To learn more about The Farm, volunteer or rent one of the plots, contact Deanna Coop at the Albion Hills Community Farm, [email protected]. You can also hook up with The Farm on: