The Meaning of Red Fife

From farm to mill, a heritage grain makes a remarkable journey back to the future. 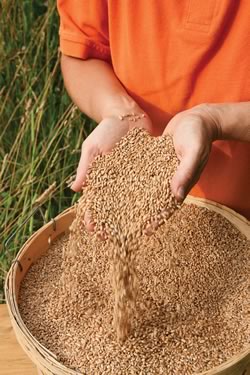 Karen Hutchinson lets a handful of smooth reddish kernels pour through her fingers. “Red Fife wheat is Canadian slow food,” says the Caledon grower. The grains are from the first harvest of Red Fife that she and her husband Rich Miller planted in 2010 on their 100-acre farm. “It’s also a ‘low input’ crop,” she explains, farmer-speak for requiring no fungicides, pesticides or fertilizer.

Named for its ripened colour and for David Fife, the Scot who brought it from the Highlands to Ontario in the early 1800s, Red Fife is making a welcome comeback in the kitchens of artisan bakers and heritage food enthusiasts throughout the province. And farmers like Karen are excited by the heritage grain’s hardiness, its distinctive nutty flavour and its “genetic mutability,” which means the wheat actually expresses “terroir,” taking on local flavour characteristics wherever it is grown. “As specific as the Peel Plain or the Oak Ridges Moraine,” says Karen.

Once the dominant wheat in Ontario, Red Fife’s vigour gradually declined early in the 20th century as it was hybridized for a short growing season and large yields. The resulting grain began to require fertilizer, bug spray and fungicide, turning a once hardy staple into a “high input” crop. Fortunately, the original seed had been preserved over time by a few heritage-crop farmers and seed savers who remembered the original Red Fife’s ability to adapt quickly to soil conditions, pests and climate, making it a natural choice for organic farming.

“I have so much respect for the generations before and their incredible knowledge,” says Karen, noting that organic growing has its own challenges. “It’s a completely different process,” she says. She’s contemplating mechanical “scuffling” for weed control and pondering the “to till or not to till” debate. While tilling helps keep weeds down, it also kills beneficial microbes and earthworms, and makes the topsoil prone to picking up and leaving in a dry windy season.

The story of Karen’s land is a microcosm of the history of the Peel Plain, a fertile tract of land in Caledon. After it was cleared in the mid-1800s, the land was depleted by a monoculture wheat boom. By the time Karen’s grandparents acquired the farm in the 1920s, the land needed replenishment. They ran a mixed farm, rotating crops, turning their livestock’s manure back into the soil, and leaving the land fallow to bring the soil back to health. Her parents were dairy farmers and cultivated a spectrum of produce for themselves and their community.

Karen and Rich’s experimental planting of Red Fife continues in this tradition: to provide for their family, to preserve a valuable heritage crop for future generations, and to help reinvent a local agricultural economy. Karen is determined. “This clay soil once yielded up wheat. A grain like Red Fife is going to adapt.”

The couple saved last year’s grain harvest to replant and build up a seed bank. They hope to have enough in the future to send to K2 Milling in Tottenham for milling into flour. “It’s part of the circle to figure out how families can farm again,” says Karen, “and how our kids can make an honest, decent income from the farm.” 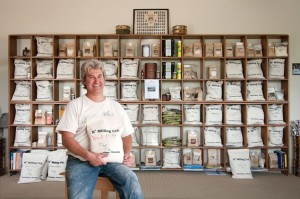 Nose to the grindstone Miller Mark Hayhoe: “We process over 30 types of grain and we custom blend.” Photo by Pete Paterson

Miller Mark Hayhoe looks on as his helper, a local baker’s son, piles bags of freshly ground flour. The fat brown paper bags line up like buns fresh from the oven. “It’s part of a perfect circle,” says the third generation miller, echoing Karen Hutchinson. He sees the future of food as “direct links in close proximity,” from farm to mill to bakery and home. “There were once 2,500 mills in Ontario,” he says. “They were central to the life of every small town.” The local links he espouses yield fresh, flavourful food that is alive and complex, along with thriving communities and a lowered environmental footprint because there is less gas-guzzling trucking of goods.

Grains like Red Fife are emblematic of those links. Mark’s inspiration came while working at his father’s huge wheat mill in Woodbridge. In the family since 1935, the old facility once processed all of York Region’s wheat. But customers were looking for something more than the standard offering, Mark says. “Food was changing. People were asking for whole grains and were interested in different types of flour and healthier options.” Mark also enjoyed the other side of the business, working with farmers and knowing the fields where the grain originated. So he started K2 Milling in Tottenham in 2007. Today, 75 per cent of what Mark grinds is grown within 100 kilometres of his mill, and 90 per cent is organic.

“We process over 30 types of grain and we custom blend,” he says, noting his dislike of the term “all-purpose” flour. He estimates there are about 10 artisanal mills like K2 in Ontario. While several of these mills are still water powered, all use cool processing, which preserves more of the food value of the grain. “Cool milling doesn’t rupture the fat cells of the grain and you get a longer shelf life.”

Working with whole grains requires constant vigilance. “The oil content of a grain, the humidity and heat on a given day… these factors go into grinding,” says Mark. It’s a carefully calibrated milling process that keeps the end product light and not sticky.

While certain grains work well on their own as flour, others are custom blended for a baker’s end goal in taste and texture. Some grains yield beautiful cooking oils and fibres like bran. Mark even mills his products for makers of gourmet pet biscuits.

And the name K2? “I studied economics,” says Mark. “K2 is a symbol for exponential return on capital. There is also a mountain in the Himalayas in the K2 range, lower than Everest, but harder to summit.” That may sound like an uphill climb, but Mark is quick to add, “I believe in the Farmer’s Creed. The one that says that return on investment isn’t just about money. It’s something you can’t calculate. Like a healthy community and environment,” and the glowing satisfaction of responsible stewardship at the journey’s end.

Monica Duncan is a freelance writer who lives in Adjala. 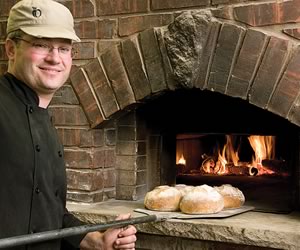