Both male and female wrens generate a potpourri of chatter – a profusion of messaging rivaling the texting of human teenagers.

My wrens have left for Dixie. I will miss them. These animated sprites enliven my yard May through August. They are among the noisiest of birds and their departure heralds the quietude of autumn.

A male wren must have a syrinx * of iron, for he repeats his song hundreds of times per day. Both male and female also generate a potpourri of chatter – a profusion of messaging rivaling the texting of human teenagers. 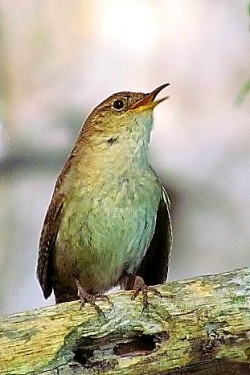 A male wren must have a syrinx of iron, for he repeats his song hundreds of times per day. Photo by Don Scallen

Much of this chatter is directed at perceived threats. Remarkably, they tailor their reaction to the interloper. I can tell when a cat has entered the yard by the fury of the wrens’ response. Cats are considered a threat of the highest order.

People elicit a much calmer response, except when they get uncomfortably close to a nest box.

The complexity of wren behaviour also includes differences in temperament between individuals. The mother wren would scold me incessantly and hesitate to enter the nest box if I was near.

Her mate, however, essentially ignored me, entering the nest box without pause to stuff the yawning maws of his young with spiders, moths, caterpillars and sow bugs.

It was the male that discovered the food offerings I left in a basin on the grass under the nest. I had reasoned that worms might be relished – after all they are a staple of robins and other birds.

So I placed worms in the basin along with slugs and centipedes. The worms were ignored, but the centipedes were quickly discovered, dispatched and fed to the young.

Entice wrens to your yard by providing nest boxes with holes of 1 to 1 ¼ inches. Larger entrances invite house sparrows to move in. Multiple houses are recommended – the females appreciate a selection. 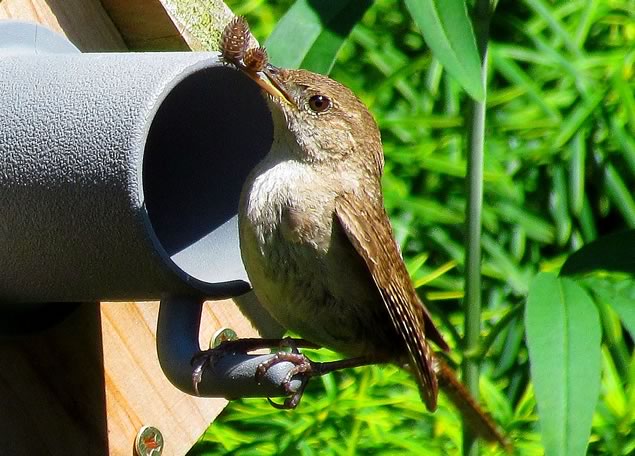 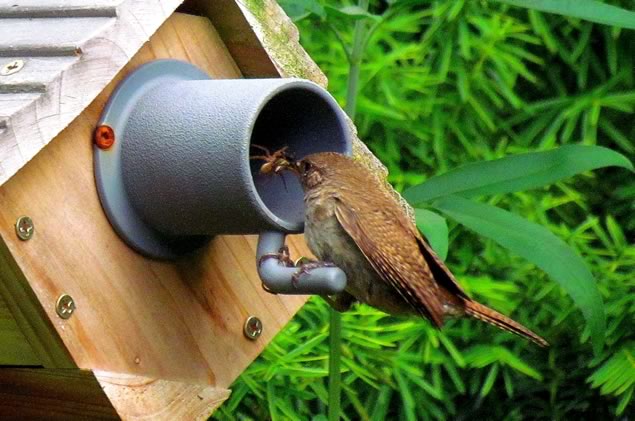 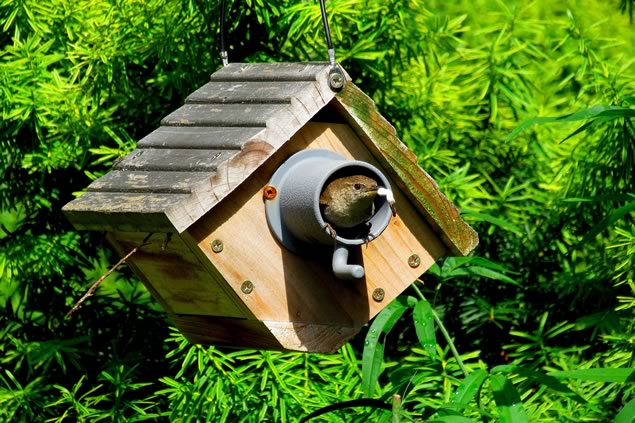 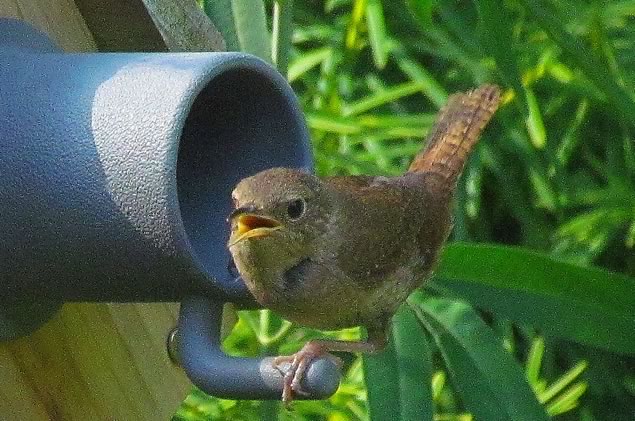 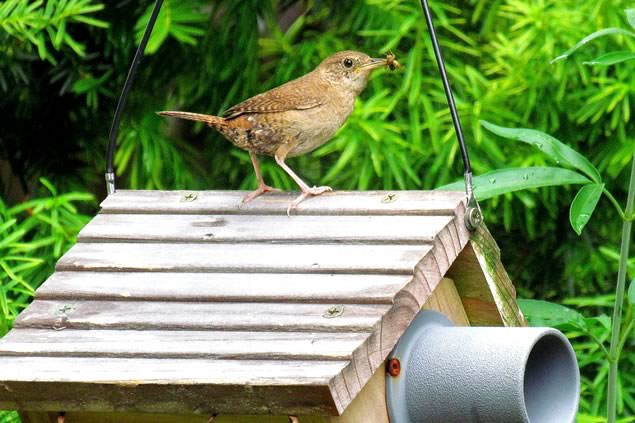 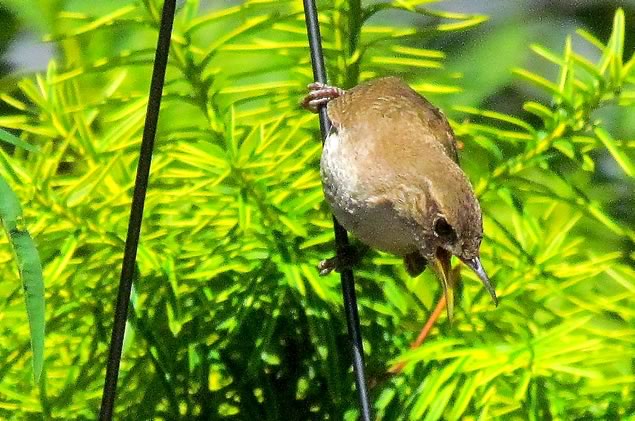 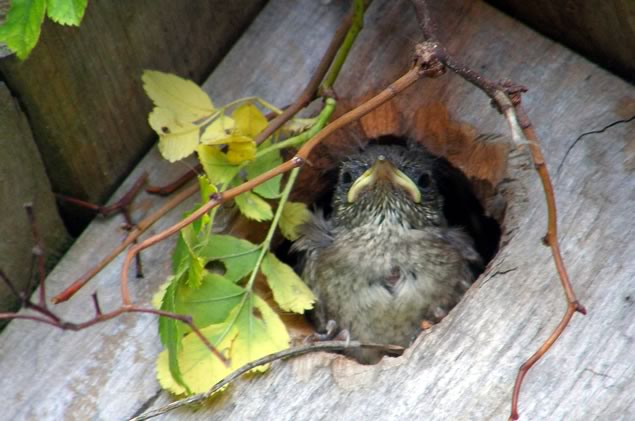 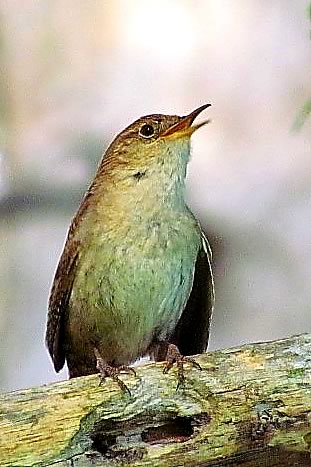 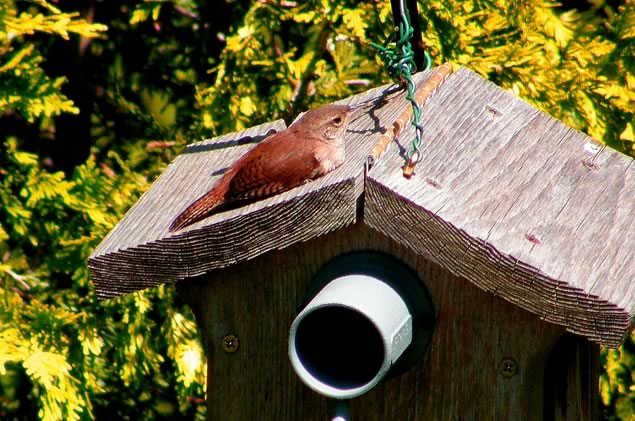 <
►
>
Both male and female wrens generate a potpourri of chatter - a profusion of messaging rivaling the texting of human teenagers. Photo by Don Scallen

What a syrinx is?

A male wren must have a syrinx * of iron – for he repeats his song hundreds of times per day. *syrinx: a bird’s vocal organ.  Syrinx was the name of a nymph in classical Greek mythology.