Sausages that are fast becoming a popular option, even among Broadway Farm’s Market’s most health-conscious customers. 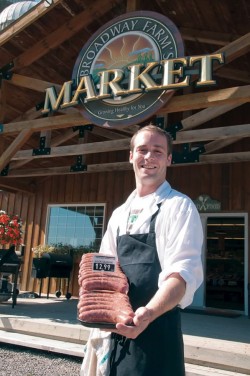 I ask Jordan Livingston, 21, what jokes his friends make now that he has become the “Sausage King” of Broadway Farm’s Market on Heart Lake Road. “You wouldn’t want to print them in your magazine,” he assures me, adding, “You know, there just aren’t any clean jokes about sausages.”

Working for his parents, Janine and Jim Livingston, is the last thing Jordan thought he’d end up doing. But after a year of culinary school at George Brown College, he realized that his love of food didn’t translate into wanting to be a chef.

“I’m a people person,” says Jordan. And there’s no doubt this is true. With short light-brown hair, sparkling hazel eyes and a fuzzy five o’clock shadow, he dons a butcher’s apron and a huge smile. Though Jordan must get razzed about being a sausage maker, he’s clearly a likeable guy and the jokes would be entirely good-natured.

Unimpressed by Toronto’s urban scene, Jordan came home after college and found himself drawn to butchering meat, the class he most enjoyed at school. When Larry Cudney, Broadway’s butcher sustained an injury, Jordan got the call to make sausages.

“Because I was making so many, I got bored,” he says. Boredom led to experimentation, and this has resulted in some amazing sausages: spicy Thai chicken, rosemary lamb, and wild leek pork, as well as more exotic varieties, such as cranberry and orange zest duck. His latest invention is pork with sundried tomatoes, basil and Asiago cheese.

Jordan’s sausages, which are free of filler, gluten, sulphites and nitrates, are made from quality meat and have become one of Broadway’s signature products. Gagi Prahlad, a customer who is addicted to them, explains why: “I don’t buy sausages from supermarkets because I don’t know what’s in them. I’m very health-oriented. I lift weights daily and stick to a very wholesome diet.” The rosemary lamb sausages are Prahlad’s favourites, but he also likes the turkey and chicken because he limits his red meat intake. 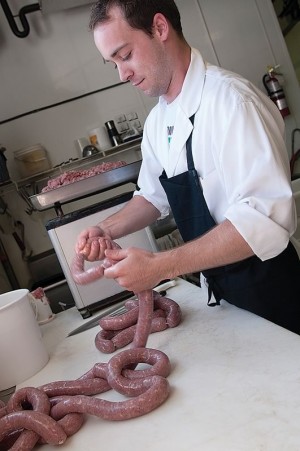 Jordan Livingston twists off links of freshly made sausage. “One day it was, ‘Jordan, you have to make sausages.’” Photo by Pete Paterson

Broadway Farm’s Market, which turns ten next year, is housed in a building that was once the milking parlour on the Livingstons’ dairy farm. Over the years, the business has enjoyed an annual growth rate of more than 10 per cent.

As a result, the five per cent loss in business the market suffered when the Highway 410 extension opened two years ago was a surprise. “At its peak,” says Janine, “we had 12,000 cars per day travelling down our road. Now it’s 800.” Though she likes the quieter road, wooing back customers has taken time. “The biggest problem is that people find it hard to locate us now,” she adds.

At 6,000 square feet, the market has doubled its floor space since it opened. It stocks an impressive selection of local food and food-related products, including fruit preserves made by Anne Livingston, Janine’s mother-in-law, and the much-loved lasagna baked by Rick McKay, the market’s chef.

But it’s the meat counter that sets Broadway apart. In addition to Jordan’s sausages, their chicken has a loyal following, and customers are now swooning over their new black Angus beef.

The beef is raised by John Stirk, Janine’s brother-in-law and owner of Highgrove Farms in East Garafraxa. “We follow a set of natural procedures and protocols,” says John. His cattle are grass fed and finished on grain. He switched from more conventional cattle farming when he realized that there was a demand for a “premium Angus product.” He adds: “We produce what we want our family to eat.”

The quality of the beef isn’t a function of good farming alone; it’s also the result of the skills of the market’s butchers: Larry and, more recently, Jordan. The Sausage King says, “I like butchering. I like cleaning the carcass up and cutting nice steaks and roasts. I can break down a whole carcass now.”

When asked if he ever feels queasy about his job, Jordan explains that his farm upbringing attuned him to the idea that the animals would, at some point, always become someone’s meal.

Despite his flare for sausage making, Jordan has enrolled at University of Guelph, where he is studying water-resource engineering. But he will be home on weekends to earn extra money making the sausages that are fast becoming a popular option, even among Broadway Farm’s Market’s most health-conscious customers.

The word sausage is derived from Old French saussiche, from the Latin word salsus, meaning salted.