Worms in the Woods

Long considered the best friends of gardeners, earthworms are proving to be formidable enemies of the forest.

I remember clearly when it first dawned on me that something was wrong. It was on a late August afternoon about 15 years ago. It wasn’t exactly a “eureka” moment, more a slow revelation. At the time, my family and I had lived in the countryside south of Erin Village for just three or four years. Having moved from a more urban environment, I savoured every opportunity to get out and traipse over our “back 40,” particularly enjoying our woodlot which is composed entirely of deciduous trees – primarily maples, beech and ash.

I had been noticing that our woodlot looked a bit odd, but I couldn’t quite put my finger on why. In hindsight, as a professional biologist, I’m a bit embarrassed that it took me so long to see the problem. 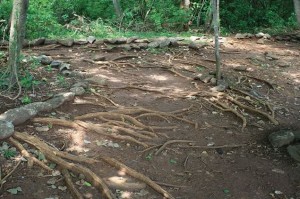 Our forest had no leaves – at least not on the ground. A seemingly lush canopy overhead provided the typical filtered light of a forest, but on the ground – just dirt and sticks. How could that be? My recollection of a normal forest floor, say, in cottage country, was a moist layer of leaves providing a soft spongy cushion underfoot. But here, hard dry dirt.

Why should my forest be without that characteristic layer of litter that helps define a rich woodland?

Over the next while, through investigations that included crawling around on the forest floor and turning over sticks and rocks, Internet searches, and reading scientific literature, I came to realize that my woodlot was suffering from an overabundance of worms. I found no salamanders in my woodlot and relatively few litter-dwelling insects. However, beneath almost every log and rock I turned over was a striking number of earthworms.

Worms are digesting the leaves that fall to the ground in my forest at such a pace that accumulations of litter do not occur. As it turns out, it doesn’t take any worms at all to comprise an “overabundance” in this neck of the woods. That’s because worms aren’t native to this part of the world. They are an introduced, or “exotic,” species.

Why aren’t there any native worms?

In virtually all of Canada and much of the northern United States earthworms were extirpated during the recent (well, recent in geological terms) Pleistocene glaciations of 11,000 to 14,000 years ago when the landscape was covered with ice sheets up to several kilometres thick.

According to one of the most accessible sources of information on worms and their impacts on forests, the website of Great Lakes Worm Watch (www.nrri.umn.edu/worms) run by the University of Minnesota, the glaciers scoured the land, eliminating all forms of life. As the glaciers retreated, forests and other ecosystems migrated north. Slow-moving animals, such as earthworms, whose natural rate of spread is only about four to ten metres per year, remained in the south. Therefore, our Canadian forests evolved in the absence of earthworms.

How did they get here?

The first earthworms and worm cocoons (egg cases) likely arrived with soil, plants, food and shipping ballast brought by European settlers in the early to mid-1800s. And exotic species of earthworms have continued to be accidentally imported ever since. According to Worm Watch, there have been 25 species of non-native earthworms reported in Canada and 36 in the United States. Most, including the familiar night crawler or dew worm (Lumbricus terrestris), come from Europe, with the remainder from Asia.

Now that they are here in abundance, the most common vectors of earthworm spread are vehicles and shipments of soil or plant products. Worms and their eggs “hitchhike” on cars, trucks, farm machinery and all manner of transportation. Worms are common passengers in shipments of agricultural products, horticultural topsoil, and the sand and gravel used in road construction. According to Erin Bayne, a forest ecology professor at the University of Alberta, worms are spread into off-road locations like my woodlot and more extensive regions of forest on horses’ hooves, hikers’ footwear, all-terrain vehicles, and by fishermen who dump or lose their live bait near lakes and along portages and trails.

What are the impacts of earthworms?

Earthworms seem benign and most people likely have an image of worms benevolently digesting dirt, making gardens productive and providing food for “the early bird.” While earthworms have been shown to have positive effects on soil structure and fertility in agricultural and garden ecosystems, these same creatures can have very different effects in hardwood forests. 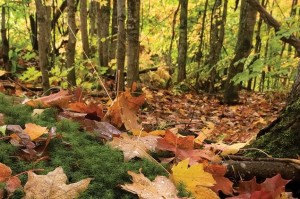 Most of the creatures that hold my professional interest – like songbirds, moose and caribou – live in forests, but not within the forest floor itself. Although I still chastise myself for not figuring out sooner that something was amiss in my woodlot, it turns out my lack of awareness is relatively widespread, even in academic and professional circles.

According to Tara Sackett, a post-doctoral student in the department of geography at the University of Toronto, there are very few researchers studying the ecological impacts of earthworms. In fact, she says she is only one of two in Ontario. The other is her academic supervisor, Dr. Nathan Basiliko. Sackett is researching the impacts of earthworms on forest soil nutrients in Haliburton Forest, a large private tract of land south of Algonquin Park. She has found that worms are widespread in the forest there. Sadly, it seems that earthworms have a foothold in cottage country.

Sackett notes that in previously earthworm-free forests, decomposition of the mass of leaf litter is a slow process controlled primarily by fungal decomposers. Without a powerful detritivore (something that consumes dead material such as leaves), decomposition can be slower than the accumulation of new litter and the result is a thick spongy forest floor (noticeably absent in my woodlot) called a “duff layer.”

The duff layer can be several centimetres thick in forests dominated by shade-tolerant hardwoods, such as sugar maple, yellow birch and ash. The duff layer is an ecological community unto itself, supporting multitudes of micro-organisms, spiders, insects and fungi, which in turn help sustain the broader forest ecosystem. The duff layer provides habitat for salamanders, nesting material for birds, shelter for small mammals, and a seed bed for many plants.

When earthworms become established they can rapidly remove the duff layer, literally consuming it from below. In the spring of the year, affected forests may have a veneer of leaves accumulated from the previous year’s leaf fall, but that thin layer is not enough to support the diversity of life that a full duff layer does (and it is also ephemeral, disappearing by August, as I found in my woodlot).

Researchers like Tara Sackett and those associated with Worm Watch have documented a host of problems associated with earthworm colonization of native hardwood forests, including:

In essence a forest with worms is a depauperate forest with lower populations and likely fewer species of native insects, vertebrates and plants.

What can be done?

If you turn over soil in your yard or garden you would not be surprised at all to find an abundance of earthworms, and sadly, if you look under rocks or logs in your local forest or woodlot, you will probably find earthworms there too. I have found them common on the stretch of the Bruce Trail that I frequently hike, suggesting they are widespread throughout our region.

Unfortunately earthworms are not benign, they are among the host of ecological threats that are affecting our forests. So far, no practical way to eliminate earthworms once they become established has been developed. As Tara Sackett warns, any insecticide that would kill worms would undoubtedly also have serious ecological effects on other animal life and soil biota.

(It turns out that cluster flies, the well-known pest of rural residences in our area, actually parasitize earthworms. Fly larvae overwinter in earthworms and consume them from the inside. However, as Sackett notes, given the abundance of earthworms in the area, it seems that even the cluster flies are not effective at limiting worm populations.)

If there is a glimmer of good news it is that without the assistance of humans, earthworms spread very slowly, so a focus on preventing further movement of worms is important. There are several species of earthworms that are not yet widespread across the Great Lakes region, but have the potential to be very destructive. In addition, much of central and northern Ontario remains worm-free.

The most important thing that can be done now is to limit the spread of earthworms. To help accomplish this consider the following:

Most people treasure our forests as remnant natural ecosystems, sources of recreational enjoyment, and homes for many species of wildlife. No animals are “evil” by nature, and earthworms are surely not consciously malevolent towards forests. Nonetheless, they do pose a very real threat and our forests need whatever help we can provide to limit the damage caused by this and other human-sponsored afflictions.

About the Author More by Chris Wedeles

Chris Wedeles is a biologist who lives in Erin.
Show 5 Comments