All Creatures Great and Small

“How would you like it if someone pulled your arms off?”

It is 1953, on a small farm on the outskirts of Mauerkirchen, Austria. A little girl is being admonished by her aunt. “Now you will have to destroy it,” says Aunt Johanna of the fly that young Ursula has just freed of its wings. “It won’t be able to move or feed itself. It will just die.” And with that comes Ursula Hart’s dismaying revelation that her actions could cause the suffering of other creatures.

On a rainy day shortly thereafter, Ursula comes across a little bird shivering in a puddle in the church square. She lifts it up and instinctively takes it into the warmth of the cathedral. With the bird cradled in her hands, she walks down the grand nave toward the altar and begins to sing a song to God, asking for the sun to shine to dry the little bird so it can fly again. But a priest scolds her for creating a disturbance and sends her back outside. As she sadly blows on the bird to keep it warm, a nun approaches and places a tender arm around her. “Don’t worry,” the nun says, “God always answers the prayers of little children.” Even as she speaks, the clouds part, the little bird ruffles its feathers and flies into the sunlight.

Fast forward to 1980. Ursula Hart has been in Canada for over two decades. During a long and fulfilling middle-school teaching career, she has acquired a farm near Palgrave where she intends to develop an animal shelter. Since those first formative experiences, she has been informally rescuing animals all along.

“I guess the women in my family are like this,” she says. “If you find a sick or injured animal, you take it home and look after it. You take responsibility.”

Today Ursula’s Haven of the Heart is tidy, discreet and most of all secure. Her shelter houses ducks, chickens, roosters, dogs, cats, sheep, horses, donkeys and more, providing what is virtually a hotel for each species. There is below-grade fencing, well defined open and closed areas indoors and out, confinement for some critters and generous freedoms for well-socialized others. Species-appropriate fencing sections off the barns and kennels around the house, integrating them into a flowing extension of Ursula’s charming and antique-filled log home.

In the house, about a dozen dogs, including one recovered from a broken back, raise a ruckus when a visitor arrives, then settle down and watch quietly.

“Years ago, animals were considered just as possessions. Any sick or injured creature that had no utility or value as a purebred was euthanized.” Attitudes are more compassionate today, Ursula says, although when she started out she was often asked, even by friends, how she could “waste her time” on animals that had no monetary value.

Ursula’s philosophy is quite clear: “Because they exist they have value and deserve to be here.”

Currently, a menagerie that includes nearly a hundred cats and several dozen dogs among a variety of other animals keeps her busy, running from five a.m. to often one or two a.m. by the time they are all are fed, tucked in and, in some cases, given medication.

Among the last group is a sweet little lap dog, a Petit Bassett Griffon Vendéen, that has just had corneal transplants financed by Ursula. His joy is electric – he can see for the first time in his life – although he will need to be on drugs for some time.

Most animals that come to Haven of the Heart have nothing wrong with them other than needing some TLC or socializing. They are usually referred to her by municipal animal shelters or veterinarians. “They won’t have it in them to put down a perfectly good animal, so I take it in.” She notes ruefully that for health and energy reasons – she’s also looking after her elderly mother – she is less able to do this than in the past.

“When I first came up here there were no local humane societies. Now, if they determine an animal can be adopted out, that’s what happens. But occasionally, one is returned.” A pet might be surrendered for doing what comes naturally, as was the case for a retriever that throttled a neighbour’s duck. For this infraction, the local humane society wouldn’t accept it for adoption, but it was a model dog in every other way. Ursula will take from days to months to socialize such an animal, gradually exposing it to other animals and having it observe the behaviour of dogs that have learned to ignore the geese wandering in her yard.

Tamara Taylor is the pound keeper at Brampton Animal Services which handles some 2,800 animals a year. She says the shelter occasionally sends a rescue to Ursula. “Sometimes it’s an animal with a treatable medical condition that we just can’t afford to keep. Or a dog that needs extra attention.” Tamara says the ones lucky enough to go to Ursula will have a chance at a normal life.

Some dogs are nippers or runners that need retraining. Some are impossibly shy. And, sadly, some have been badly abused and may take a very long time to trust a human again.

The dogs are segregated either into friendly packs or in separate kennels according to their ability to get along. (The kennel dogs have access to the outdoors at all times.)

The cats seem more adaptable. They mill about together in the heated cat barn, on sofas, shelves, every possible horizontal surface – with one feline exception. Holly was unaccepted by the others. She is quite content to live in the aviary with the birds.

In addition to the kennel population, up to a dozen dogs and numerous cats live in the main house while undergoing socialization. Several of them are elderly. When she’s in the house Ursula keeps an eye on the kennel with a closed circuit monitor on her hulking old wooden desk. 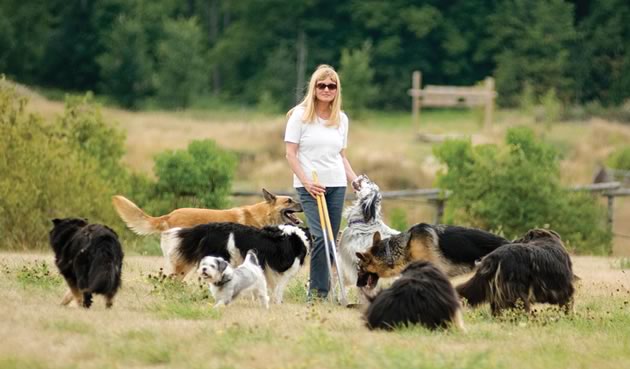 At her farm near Palgrave, Ursula Hart is guardian to a menagerie that includes dozens of dogs, nearly a hundred cats, and scores of other domestic animals and fowl. Photo by Pete Paterson.

By her estimation, Ursula has sent out “thousands of animals” to adoptive homes, households that can provide the special care, space and, most important, the necessary time to devote to a new furry or feathered family member.

Patience is also a requirement. “Too many times a family will expect an adopted animal to fit right in immediately, as though it has been there all along,” says Ursula.

Aubrey Smith, a prospective adoptive owner, visited his dog-to-be nine times, each time bringing along a friend or family member. He recently brought home Pippi, a lovely Labrador-shepherd cross. She was initially very timid, but things have improved dramatically.

“I could not have asked for a better dog,” says Aubrey, absolutely delighted with his new companion. “She’s come along much faster than I expected.” Once she was finally adopted, he says, it took very little time for Pippi to adjust to her new home. “And then she adopted me.”

Aubrey had visited several pounds unsuccessfully before he found Ursula. “I told her what I needed, a gentle dog who would not roam. And I didn’t want to train a puppy.” Aubrey was totally taken by Haven of the Heart. “I was astounded that such a place exists. And I’m so impressed by the work that Ursula does.” After meeting Pippi, he never looked back – it was a perfect match.

In every case, Ursula watches the dog’s first interactions with its prospective guardian, and she works gently but persistently to be sure of its willingness to go to the next level.

Ursula credits her insight and sensitive spirit to her great grandmother, who was blind. “I spent a lot of time taking her to the park. She would direct me to a certain spot and a certain tree and ask, are the blossoms still pink? She would ask to move closer so that she could take in its fragrance.” If Ursula’s sensual flowering sounds artistic, it’s no surprise to find out that she also paints, most often bucolic scenes of her own farm.

For someone who works so very hard, Ursula projects a calm air of equanimity. She’s peaceful yet energetic, artistic yet pragmatic. Outside, as we talk, a small brown rat falls victim to a barn cat as the Brahman roosters scratch about the yard. Ursula will let nature take its course with the rat: “You’ve just got to have cats where there is grain,” she says.

Haven of the Heart, with its bounty of shady trees, has remained verdant despite the year’s brutal drought. In the soothing fall sunlight two cats head-butt us where we sit, on a wooden bench sunk softly into the Oak Ridges clay.

Ursula looks around with satisfaction at the fully grown trees. “It’s wonderful to be surrounded by these trees that we started,” she says. A lightning-blackened beech looms on the periphery of an open grove. “I’d love to have that tree sculpted into something, just where it stands,” says Ursula.

Yes, I think, and if that were to happen, it should certainly be a giant effigy of Saint Francis of Assisi, the patron saint of animals, whose spirit so clearly resides over Haven of the Heart.

If you are interested in adopting, making a donation, or receiving Haven of the Heart’s occasional newsletter, e-mail [email protected]. Haven of the Heart is a registered charity and depends in the main on the generosity of adoptive families and other concerned animal lovers. Adoption fees vary, from free to comparable rescue fees for “breeds,” with special consideration to those on fixed incomes.

You can also visit their web site: havenoftheheart.wordpress.com