It has become a bit of a tradition to dedicate much of our winter issue to the remarkable people whose optimistic spirits and hard work make this community a better place to live.

In The birds of winter  article in this issue there is an extraordinary photograph of a redpoll with a snowflake on its head. I apologetically asked the extraordinary photographer, Robert McCaw, if the image had been digitally manipulated (apologetically, because I was pretty sure I knew the answer, but these days …). No, just one of those lucky moments, he said. A lucky moment maybe, I thought, but capturing that moment in crystalline clarity had nothing to do with luck. In our Local Hero profile of Ken Weber – who we like to think of as “our own Ken Weber” (even though we know we share that happy distinction with the many, many people whose lives Ken has touched the world over) – he acknowledges he’s been lucky with the opportunities in his life. Then, summoning the spirit of film producer Samuel Goldwyn, he adds, “but I’ve always found that the harder I worked the luckier I got.”

It has become a bit of a tradition to dedicate much of our winter issue to the remarkable people whose optimistic spirits and hard work make this community a better place to live. From retired professor Ken Weber to the kindergarten kids at Herb Campbell Public School, from the combined efforts of the Coalition of Concerned Citizens to the deeply personal crusade of accessibility advocate Anne Harland, all our heroes, like snowflakes, are highly individual, but collectively they wrap a cold world in a warm blanket. 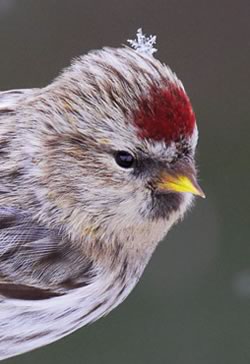 Again this year Jeff Rollings has written most of the tributes to our heroes, but he begged off on Brandy Robinson, who initiated Orangeville’s Living Library and happens to be his wife. And the profile of the Coalition of Concerned Citizens was contributed by Nicola Ross who has previously reported on the group’s activities for this magazine over the course of their long battle against the Rockfort quarry.

Finally, coming back to that snowflake-crowned bird, here’s advance notice to get out your own cameras this winter and start shooting. In our spring issue we’ll be announcing the details of a photo contest – at least we’re calling it a contest. There will be “winners,” and their work will be published in a later issue, but the real goal is to provide an opportunity for our readers to capture the essence of life and landscape in the hills and share their images with others on our website at inthehills.ca.

May the winter be kind to you.