Things were looking good for Bert to achieve the dream he’d had ever since he was a young boy in Mono.

Bert Nieuwenhuis always wanted to be a farmer – he even married a farmer’s daughter. It just took him a little longer than he’d expected to become one.

Lamb lovers throughout Headwaters and anyone who visits the Orangeville, Inglewood or Caledon farmers’ markets will know Bert, and not just because he sells lamb shanks, racks, legs, chops, burgers, wool and sheepskins. They know him because he’s quick to smile and always has a joke at the ready for folks who approach his booth.

At his farm just north of Laurel in Amaranth Township, Bert raises Dorset sheep. A large, docile breed, Bert says he likes how they look. And while he enjoys working with his wards, he’s equally pleased by the opportunity to meet people at the weekly farmers’ markets that have become an important part of the Headwaters food scene.

Bert, however, wasn’t always a people person. In fact, he was anything but when he graduated with a diploma in agriculture from the University of Guelph, full of ideas about how he was going to raise enough capital to buy himself a farm.

At first, everything went according to plan. In 1987 he married Janet Bosman, whose father was a local dairy farmer, and got a job selling real estate. In a hot market, sales were brisk – brisk enough for the young couple to purchase a place in Grand Valley and almost immediately pay off the mortgage.

Things were looking good for Bert to achieve the dream he’d had ever since he was a young boy in Mono. His dad raised chickens, rabbits, dairy cows, vegetables and all manner of things agricultural on a 10-acre hobby farm near the intersection of Blind Line and 10 Sideroad, and Bert always helped out.

But in the aftermath of the Black Monday stock market crash in 1987, real estate took a dip and so did Bert’s fortunes. His wife developed health problems and it didn’t help that he’d bought a real estate franchise in Orangeville. First, he was forced to rent the land around his Grand Valley farmhouse. Then he had to rent the house itself and eventually sell it to stay afloat. He unloaded the franchise too. Then he and his wife moved in with her father on a “temporary” basis.

“That was 20 years ago,” Bert recalls as we’re sitting around the dining room table in his spotless kitchen, “and we’ve been here ever since.”

As it turned out, it wasn’t until 2004 that Bert could finally call himself a farmer. His father-in-law had given up his dairy quota and experimented with beef on the 87-acre farm, until mad cow disease all but wiped out the industry. With the barns empty,  Bert decided to invest in lambs.

“Between taking an introductory course on shepherding and looking at the economics of sheep, I decided to give them a try,” Bert explains, adding, “They are also an appealing-looking animal.”

He bought a hundred ewes that year at the bargain price of about $170 each. “For once, the economics worked in my favour,” he quips, noting the market was depressed when he decided to jump in.

Despite good timing, success didn’t come easily. At first he tried raising the lambs and selling them at live auction. But the market was unstable. So he tried to flog whole lambs for people’s freezers. That didn’t work either. Undaunted, he began selling individual cuts of lamb – chops, legs, racks – but that was slow too, until he decided to bring some product along to show his customers. “People like to see what they buy,” Bert says.

He tried lots of different markets before settling on the Orangeville, Inglewood and Caledon farmers’ markets (as well as the Friday market at Sherway Gardens in Etobicoke).

“I learned,” says Bert, “that high-volume markets don’t necessarily turn into higher sales.” The people who attend the market need to be there to buy food.

He likes the homey atmosphere of the Inglewood market best, where, he says,  “my sales are stronger and more consistent than in Bolton.” He’s interested in seeing what happens this summer when the Credit Valley Explorer tourist train makes its weekly stop in Inglewood. To accommodate the train’s schedule, the Inglewood market is opening earlier. “I hope they bring their coolers,” he says.

The Caledon farmers’ market in Bolton is also undergoing major changes that Bert hopes will improve his sales. It has moved from Thursday night to Saturday. “People say Bolton really comes alive on the weekends,” he says.

In addition to farmers’ markets, Bert’s lamb is becoming increasingly popular with local chefs, and none is keener than Erik Kjaer, the owner/chef of the Market Hill Café in Mono Mills. Erik buys Bert’s briskets and shanks. He braises the brisket, removes the meat from the bone, and cooks it with mushrooms in a demi-glaze sauce. Then he fills a large Yorkshire pudding with this delicious stew. Shanks are also braised and served with beet and goat cheese gnocchi.

Robin Whaley of Robin’s Catering in Orangeville uses Bert’s lamb to make a delicious appetizer called Moroccan Lamb Lollie. “His product is consistently lean. It has great taste and he’s a wonderful guy to work with,” Robin says.

With plans underway to raise 350 ewes that will produce enough offspring for him to sell 600 lambs in 2013 (80 per cent of ewes have twins; the rest divide equally between singles and triplets), Bert is well on his way to having a comfortably profitable business. 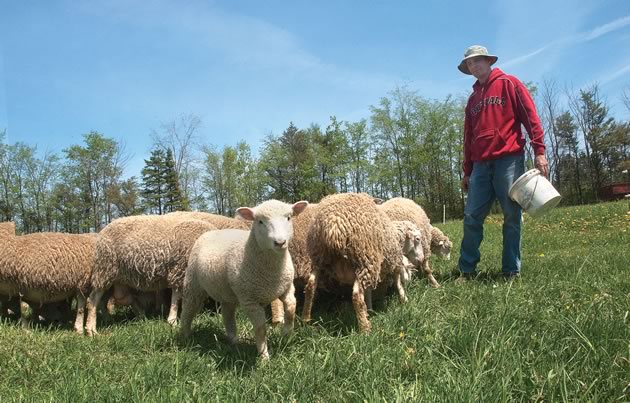 Shepherd Bert Nieuwenhuis and his Dorset sheep. Bert’s lambs are raised in large airy barns and graze on pasture during the summer. Photo by Rosemary Hasner.

His “natural” lambs are raised in large, airy barns. They graze on pasture during the summer, and he feeds them hay, barley and a protein supplement in winter. He administers antibiotics only when they’re sick. Bert says he’s lost only three animals to coyotes, a track record he credits to his farm being some distance from the forested areas preferred by the opportunistic predators, as well as his 9000-volt electric fence and the fact he keeps his sheep inside overnight.

Now his goal is to sell the less well-known cuts of lamb. “Lamb liver is my latest challenge,” he says, adding, “I’m making lamb liver pâté.”

Between caring for his sheep, playing midwife to hundreds of newborns each year, producing some cash crops and making people smile at farmers’ markets, it’s full-time work. But Bert doesn’t complain; he’s living his dream.