Only 16 per cent of watermelons now have seeds, down from 42 per cent in 2003. Alas, it is unlikely that the world record for spitting a watermelon seed will be broken.

“We enjoy the cynical story of the old-fashioned doctor who insisted first on going straight to the kitchen of the afflicted household. Not until he had effusively thanked the cook for giving him a new patient did he dash upstairs to see how he could relieve the cook’s victim. The fact is that everyone who runs a kitchen can, in the choice and preparation of food, decisively influence family health and happiness.”
From Joy of Cooking by Irma S. Rombauer and Marion Rombauer Becker, Bobbs-Merrill, 1975.

“Asparagus grown in Peru and sold overseas is commonly held up as a symbol of unacceptable food miles. Water depletion is another problem arising from its production. Most of the asparagus is produced in Peru’s Ica Valley, a desert area in the Andes and one of the driest places on earth. The asparagus beds developed in the last decade require constant irrigation, resulting in a plummeting local water supply, as extraction overtakes replenishment. In some places, it has fallen by eight metres a year since 2002, one of the fastest rates of aquifer depletion in the world. Peru is now the largest exporter of asparagus in the world, and the expansion of the industry has been made possible thanks to the World Bank’s commercial investment.

“About 10,000 new jobs have been created in a very poor area. This development has contributed significantly to Peru’s economic growth, but has produced conflict. It is now obvious that attention has to be paid to water conservation. The water tragedy unfolding has wide-ranging implications in all countries that produce fresh fruits and vegetables for shipment to the northern hemisphere off-season.”
From “News of Diversity” by Hugh Daubney, Seeds of Diversity, Seeding/11 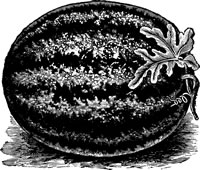 “Only 16 per cent of watermelons now have seeds, down from 42 per cent in 2003. Often the melons are not eaten out of hand as they used to be, but are more likely sliced and used in salads. Chefs prefer seedless melons, which are much more easily transformed into elegant cubes and fine dices. And without seeds, there can be no seed-spitting contests that were traditional across America. Alas, it is unlikely that the world record for spitting a watermelon seed will be broken. For the record, the tiny black bullet of a seed was spat 22.9 metres, about a quarter the length of a football field.”
From “News of Diversity” by Hugh Daubney, Seeds of Diversity, Seeding/11

“Roughly a third of food is wasted, according to raw statistics from the United Nations’ Food and Agriculture Organization. That’s about 1.3 billion tons per year.

“In the developing world, over 40 per cent of food losses occur after harvest – while being stored or transported, and during processing and packing. In industrialized countries, more than 40 per cent of losses occur as a result of retailers and consumers discarding unwanted but often perfectly edible food.”
From Small Farm, Jul-Aug/11. 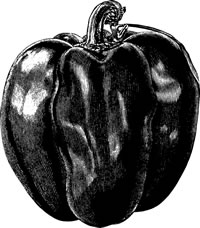 “One gallon of ripe tomatoes washed and cut up. Pour over three quarts of water; let it boil down half. Stir occasionally to prevent the tomatoes from sticking. (A double vessel is valuable in preparing these sauces.) Strain through a sieve; add two tablespoonfuls of ginger, two of black pepper, two of salt, one of cloves, one of red pepper. Boil down to a quart; add a tumbler of vinegar. Strain, bottle, and cork tight.”
From Mrs. Hill’s Southern Practical Cookery and Receipt Book by Annabella P. Hill, University of South Carolina Press, 2011. First published 1872.

“Over fifty million years ago, some ants began to alter their hunting and gathering strategies. Rather than simply killing and eating sap-sucking bugs, they learned to herd and ‘milk’ them, just as we herd and milk cattle and sheep. These ant-shepherds tend their flocks with utmost care, driving off insect predators, and, if the flow of sap on which the herd depends begins to dry up, the bugs are carried to richer pastures. The ants even construct shelters that they herd their charges into in bad weather. At around the same time that this Lilliputian pastoral society was coming into being, other ants took a different path. They learned that instead of killing rival ants they could take them as slaves.”
From Here on Earth: A Natural History of the Planet by Tim Flannery, HarperCollins, 2011.

“… two martinis before dinner count as much as a generous slice of pie for dessert and, if you are trying to keep your weight constant, second thoughts are better than second helpings. In addition, ‘Let your contours be your guide.’”
From Joy of Cooking by Irma S. Rombauer and Marion Rombauer Becker, Bobbs-Merrill, 1975.

“Consumers concerned about the environmental footprint of their diet can look forward to a new food product … In vitro meat – an animal flesh product produced in laboratories from the stem cells of farm animals – is being billed as a groundbreaking alternative to conventional livestock production.

“Time to sell the farm? Not quite. Scientists estimate it will take at least another 30 years of research to produce anything more sophisticated than Spam.”
From Small Farm, Jul-Aug/11.

“Putting tomatoes whole into the freezer saved time and energy at the hottest time of the year. When I was ready to use my frozen tomatoes, I ran a little warm water over them, and the skins slipped off easily.”
A readers’ tip from Molly Peyman, Glenn Dale, Maryland, in Mother Earth News, Wiser Living Series, Winter/11.

“The cook was a good cook, as cooks go;
and as cooks go, she went.”
Saki