The Bruce is tough, it’s beaten him up and down and yet he still manages to embrace the positive. 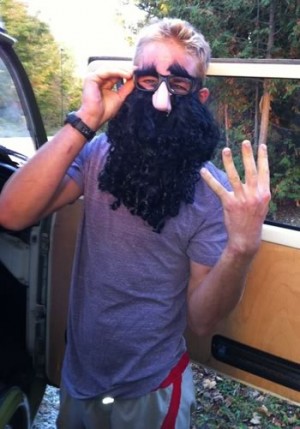 Day 4 complete ” I began this race a boy…. And completed it…. A senior” -Cody Gillies

The 70km day began chilly & wet, however Cody was in familiar company with Karen. They ran 20km before meeting up with me, and due to some miscommunication I was actually at a check point 3 km before I was supposed to be. (I would like to note however that I have yet to get lost…. so far) After consecutive days of endurance running your confidence tends to come in waves and your mental state is truly important. Cody refused to stop and fuel up before 20 km…. so I hopped in the Van and drove 10 min to meet him at exactly 20km. Keeping promises to yourself and having the check points as visible markers (20km intervals in this case) is crucial.

After sending Cody on his way a woman drove by and noticed Karen’s shirt. She pulled over and struck up a conversation inquiring about the challenge. She was very familiar with the Bruce Trail and the skill it would take to manoeuvre through it. I am not sure what impressed her more, the challenge or the reason and cause behind it. As support crew each day I pull apart Cody’s things and re-organize. It never fails while I’m plugging his phone into charge that the Canada Helps page is up. Each day while he progresses on the trail physically completing his goal km by km he watches all of you help to complete the other. The donations have grown at a rapid rate and it is a constant topic of encouragement. Being apart of this has shown me how much a little positivity can go.

Cody was exhausted on the trail today both mentally and physically. At one point while running alongside a fence, Karen heard a strange buzzing sound. She glanced over to Cody holding his running poles and nonchalantly asked “was that fence electrical?”. His quick reply was “why yes it was”… Maybe it will make him run faster The Bruce is tough, it’s beaten him up and down and yet he still manages to embrace the positive.

He has been having some trouble with his ankles however his Aunt Kim & Heather showed up with there magic fingers & comic relief. We are hugely grateful, also quite satisfied that his new bandages called for some leg shaving. I started helping with the task however “man-scaping” is not in my job description therefore the lawnmower was handed back to Cody. The ladies departed the hotel room, but not before they left a pile of vitamins and extra healthy goodies for Cody, also a long list of care instructions for me.

Goodnight everyone, Until Tomorrow…

Quote of the Day 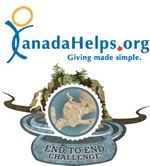 “After surviving a day like today, I know I can make it the whole way…I think”
-Cody Gillies

Cody Gillies is running the entire Bruce Trail. He has two goals: beat the current 13-day trail record, and raise $25,000 for the pediatrics unit at Headwaters Health Care Centre.