Day 5 – Trouble on the Trail

He could hardly walk and the remnants of a broken spirit were splashed on his face.

So it seems I spoke too soon. Just when you thought “Day 4” he hit rock bottom….we were wrong.

I went to meet up with Cody & Steve, anticipating to see them at 9:00am. Instead at 11:30am Cody rounded the bend and my heart sank. He could hardly walk and the remnants of a broken spirit were splashed on his face. Codys muscles were fighting against him and at this point seem to be winning. Steve pepped him up to walk another 4km, however upon this arrival Cody had to stop and consider his options. With a message left for Aunt Kim (chiropractor/life saver), Cody decided to invest in tomorrow and call it a day. His decision was to wait for treatment and hope for the best. It was a very tough call; however we were unsure how his body would respond if he went further. Not wanting to continue the damage, we dropped Steve off in Flesherton with a promise to call as soon as we knew if Cody were to continue the End to End Challenge.

If you have ever met Cody you will know he does not throw in the towel. His focus and determination is astonishing. This was a very tough moment to witness and as a spectator you cannot relate. The drive was silent and the aura thick with disappointment. In the rear-view mirror I saw him pick up his phone. It was Kim with words of wisdom.

“… Your muscles are beyond hurt, that wont change, if you do not get your self back on that trail you today, you never will”

You could say it was not what he wanted to hear, but what he needed to. As for me, with the professionals on board with continuing I turned to him after he hung up the phone.

“If you are done being a pansy now, you should start getting your shoes back on”

A few chuckles later and a proclamation of his insanity he got geared up and set out solo. I agreed to meet with him every 7-10km to make sure he was still kicking. All I can say to you is that I Cody I left at the Blantyre check point was not the one I saw leaping out of the forest waving with a ridiculous smile on his face 1 hour later. Mind over matter. He accepted that this was not going to be easy, that it will hurt and his body will scream in protest. Once he acknowledged this, he made it his new goal to overcome.

As an observer you go from a state of concern & grief to astonishment watching someone overcome an internal battle with themselves. Cody had two options, quit or continues…since quitting was never an option he had to suck it up and move forward. 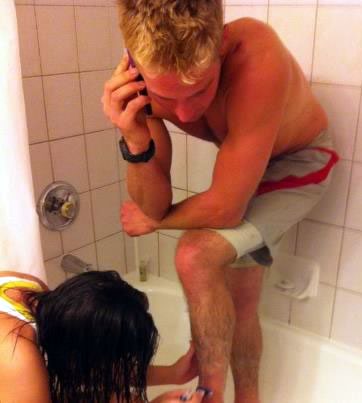 The sun is up and Cody is back on the trail. The location we were at last night was a 40 min drive from the trail this morning. I was a bit of a slave driver but he made it on time to meet up with Steven Bradshaw. They headed onto the trail at exactly 6am this morning.

If the rumors are true then day four of any ultra run tends to be the toughest… according to Cody yesterday, that could very well be true. If that is the case then we are only going up from here.

Quite a few positives for today:

I will have further updates for you this evening.

Enjoy your sunny morning, until this evening….

Quote of the day

{while on two phone calls, taking instruction for Cody’s vitamins and typing an e-mail}
“Alli, it sounds like you are running the control room at NASA”
– Johnny (on the other end of the phone…relaxing)