One of the most popular reasons women are drawn to midwifery care is because it allows low-risk mothers the option of giving birth in the hospital or at home.

Like many first-time mothers I found pregnancy to be a time teeming with questions, concerns, excitement and doubt. However, I was also privileged to be able to turn to the Midwives of Headwater Hills for support. During my first visit to the clinic, I found my midwife Linda Stahl sitting in a very clinical white office drinking Tim Hortons coffee. (What? No herbal tea?) Though a few lovely pictures of babies and bellies lined the walls, there was nothing unconventional to suggest the midwives were anything other than what they are: educated, regulated and highly trained professional women.

They are not to be confused with doulas, nurses, doctors or doctors’ assistants. They are health care specialists who perform physical exams, diagnostic tests, screening, and normal vaginal deliveries. (And yes, they drink coffee. Most babies are born in the wee hours of the morning, so coffee is a must.)

Linda co-founded the clinic with her former apprentice Stephanie Aghajanii in 2009. To help ease their heavy patient load, they have recently welcomed Sarahanna Brown, Emilia Tilson and Kylene O’Donnell to the clinic, and plan to keep it to a complement of five. Each midwife can care for up to 40 patients per year. (There are approximately 650-750 births at Headwaters Hospital annually.) 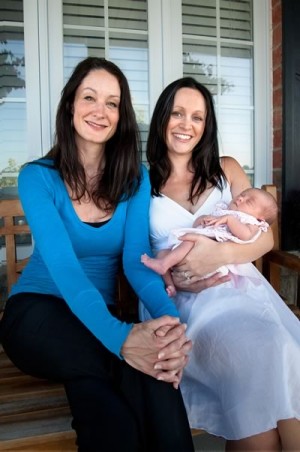 Linda Stahl (left), co-founder of Midwives of Headwater Hills, attended the home birth of both Angela Tupper’s daughters: Rachel, shown here at 1o days, and Brooklynne, 2o months. “The biggest advantage to me was the freedom to labour in the way I wanted,” says Angela, “to stand up, move around, or just do what I thought felt right. And the aftercare has been really wonderful.” Photo by Rosemary Hasner.

Linda started attending births at age 19 as a doula (birth companion) for pregnant teens in need of support during labour. After years of working as a childbirth educator, she trained as a midwife in the U.K., and then completed the International Midwifery Program at Ryerson University. Now with over two decades of experience, it’s easy to see midwifery is more than just a job to her: “It’s a calling. I know that’s who I am and what I do.”

My personal experience certainly validates her claim. I found the contribution midwifery care made during my pregnancy to be remarkable. During a particularly alarming time in my first trimester, I remember answering the phone early one morning to hear Linda’s concerned voice on the other end. “I was thinking about you all day yesterday, and wanted to see how you were doing,” she said. Wasn’t I supposed to be calling her in a panic? Apparently not. I will never forget her compassion and sensitivity during that vulnerable time. And that level of care was not out of the ordinary. When my son was born five weeks premature, Linda made more home visits and phone calls than I can remember in those early exhausting days. She constantly reminded me I was a good mother and that having emotional meltdowns just meant I was human – and a new mom.

One of the most popular reasons women are drawn to midwifery care is because it allows low-risk mothers the option of giving birth in the hospital or at home. Ultimately, says Linda, when deciding on the birth location, women should choose the place they feel safest. She explains women often treat their prospective birth very much like their wedding day, planning each detail with the utmost care. Having control makes them feel safer. And when a woman feels safe, her labour is likely to be faster and more efficient. “We’re basic creatures,” she says. “We feel better in our souls when we’re prepared and ready. Very few people can wing it in labour.”

When I made plans for a homebirth (which turned into a sudden, but lovely hospital birth at Headwaters), I received a lot of well-intentioned, though unsettling inquiries to do with the what-ifs of home birth. What if there were an emergency? What if I decided I couldn’t labour at home anymore? Luckily, these questions have answers.

Midwives follow specific criteria to help them determine whether a woman is a good candidate for home birth. As Linda explains, “Dire emergencies are quite rare. Most obstetric emergencies have advance warning signs that all care providers are trained to recognize.” In cases where there is a true emergency, Linda says, “We work in concert with emergency services and the obstetrics and pediatrics departments to combine skill sets as required.”

Many studies conclude that women who have a trusted companion during birth often experience shorter labours and decreased need for pain medication, and are generally able to cope better with labour.

Midwives also provide women with a continuity of care they are unlikely to get from other healthcare providers. They are on call 24 hours a day and can be reached for emergencies by pager. Each patient is cared for by one primary midwife, but will get to know up to four at the most, becoming acquainted with them during their appointments (which can last anywhere from 30-45 minutes). As a bonus, many studies conclude that women who have a trusted companion during birth often experience shorter labours and decreased need for pain medication, and are generally able to cope better with labour.

Patients of midwives are provided with research on a full list of topics related to pregnancy and the care of newborns, from breast and bottle feeding, diagnostic screenings, and the safety of home versus hospital birth. Then, based on that information, they are encouraged to make their own informed decisions.

Jenee and Wes Gowing enthusiastically attest to their positive experience with midwifery. In November 2009, Jenee’s delivery was Orangeville’s first midwife-attended birth. At the time, Jenee was pregnant with her third baby and, after two previous hospital births, had her heart set on a home birth. After labouring with her first baby for over 32 hours, she had been too exhausted even to hold her son when he was born. Jenee experienced a similarly frustrating second birth and began to feel the hospital wasn’t the right place for her.

Jenee finally got the birth of her dreams when the Midwives of Headwater Hills assisted her through a flawless birth in her Orangeville home. Linda and Stephanie arrived at the Gowing residence at 2 a.m., quietly integrating themselves. “Linda was on the periphery,” says Wes, “being involved, but getting out of the way too.” Jenee adds, “It felt like we were having the baby…”

The midwives administered IV antibiotics to combat Strep B bacteria. And, after only a few hours labour, baby Selah was born at 4:47 a.m. with her two siblings close at hand. Not only was Jenee able to hold her daughter, she didn’t let her go for over an hour.

Jenee describes her third birth as “euphoric” and “easy.” She credits a good portion of that to the tremendous support and care she received from her midwives, though Linda corrects her, saying, “You gave birth.”

Linda’s positive attitude and passion tend to spill over into the less glamorous aspects of her job as well, like the battle for midwifery access to Headwaters Hospital. The midwives withdrew their services from Headwaters until all of their practitioners received hospital privileges – a process that took almost a year. During that time, hospital-bound deliveries occurred at Groves Memorial Hospital in Fergus, where more than 30 midwives have hospital privileges.

Dr. Nadine French, a member of the Dufferin Area Family Health Team and founder of Orangeville’s Inner Wisdom Healing Centre, is one of those who believe “patients should have access to the care they want.” Dr. French believes that open communication between physician and midwife will result in a smooth integration between health care providers.

While the hospital administration insisted the delay was simply an administrative issue, the community took up the cause anyway, with marches, petitions, and painting their car windows with the increasingly ubiquitous slogan, “Where’s My Midwife?”

Today, four midwives have been granted hospital privileges as well as locums to cover their time off. The newest member of the midwives’ team is expected to apply for privileges later this fall.

Linda is confident the administrative struggles, political or otherwise, are behind them. She assures me, “We love Orangeville, and we’re not leaving. I’ll be here until I’m very, very grey.”

And, since I cannot imagine anyone else in the world delivering my next baby with the kind of experience, humour and compassion Linda and her colleagues provide, I think I’ll be holding her to that.

Long before obstetricians were around, midwives ruled the birth domain, bringing compassion, experience and gender support to  the birthing process. The Industrial Revolution introduced new technology and scientific approaches, transforming birth from a natural process to a medical procedure performed by doctors. This shift pushed midwives onto the periphery because as women, they didn’t have access to the formal education required of doctors. The knowledge of a midwife, gained through experience, was summarily discounted.

Although European countries established professional midwifery programs as early as 1773, the first Canadian program didn’t appear in Ontario until 1993 at Ryerson. The program, now one of six in Canada, is a highly sought-after four-year Bachelor of Health and Science, and many hundreds of applicants compete for fewer than 40 places.

While the old image of the midwife boiling water in the corner of a labouring woman’s room may still linger in many minds, the modern midwife is a distinctly specialized, highly trained professional. Today, the term midwife applies to a qualified primary caregiver who specializes in low-risk pregnancy. Focusing on prevention and early detection of complications, midwives address any medical and non-medical needs for women and their newborns during pregnancy, labour, and the six weeks following birth. The service is covered by OHIP, so every pregnant woman is entitled to receive midwifery care.