Learn about the four historic buildings at the corner of Main and Wellington in Brampton’s old downtown. 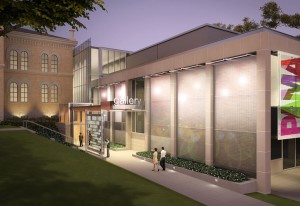 It’s been two and a half years since the Peel Heritage Complex closed its doors for a massive renovation and expansion. This fall, well over the original budget and schedule, the doors finally open again – and what a change there has been.

Renamed PAMA (Peel Art Gallery, Museum and Archives), the four historic buildings at the corner of Main and Wellington in Brampton’s old downtown have now been both visually and physically unified into one integrated complex.

The $16 million project was designed by architects Goldsmith Borgal & Company, who specialize in heritage restoration and adaptive reuse. Their goal was both to respect the historical integrity of the four buildings (representing a century and a half of architectural styles), but also to make them functional and sustainable for contemporary use. Among the criteria were barrier-free accessibility, green technology, and climate-controlled storage for the 4,500 works of art, 10,000 artifacts and 200,000 documents that make up the PAMA collection. The expansion also increased the exhibition space in the gallery and museum to more than 14,000 square feet.

Now PAMA is set to show off the results. The reopening will occur in three stages. The art gallery opens on September 30 when the public is invited to view the new exhibitions and take free behind-the-scenes tours. The grand reopening is scheduled for the weekend of November 24 and 25, and the archives will open in February.

We offer a little history of the complex and a sneak preview of just some of the many activities happening this fall. 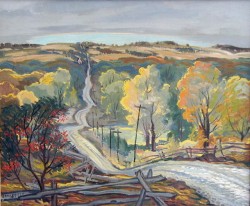 The Peel Art Gallery contains more than 4,5oo works of historic and contemporary art in its permanent collection. With the renovation, those works are now stored in spacious climate-controlled conditions. Selections of the works will be displayed during gallery exhibitions, but much of the collection is also available online, including biographical information for the artists, with a special emphasis on those connected to Peel. 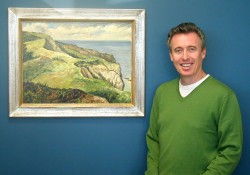 Before his untimely death in 2oo9 at age 53,  the Peel Art Gallery’s first curator David Somers had worked hard for nearly 2o years to grow the gallery’s mostly small regional collection of 4oo or so works to an impressive 4,ooo, including such nationally and internationally celebrated artists as Andy Warhol, David Urban and Jack Bush. He and his wife Lorna established the David Somers Works on Paper Endowment  Fund to provide for the ongoing purchase of historic and contemporary artwork on paper.

In 1867, the year of Canada’s Confederation, the County of Peel was formed and Brampton was designated the county seat. This stunning Venetian Gothic building with its Byzantine dome opened the same year and became an instant landmark.  It served as the Peel council chambers until the 1950s and continued as the county courthouse until 1967. The original raked and balconied courtroom, second floor council chambers and other rooms are now available to rent for performances, special events and meetings. 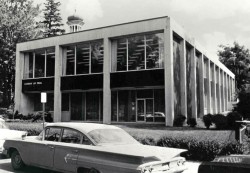 The first registry office, a small Victorian building between the jail and the courthouse, was built in 1890. In 1958 a new building was constructed immediately south of the courthouse to accommodate a larger registry office and council chambers. In sharp contrast to the classic courthouse, the new glass, concrete and granite building featured bold and simple lines in the International style. The PAMA architects have maintained not only the striking exterior features, but the sleek interior finishes as well. The building was leased to Brampton Hydro in the 1970s, and although it later held the city’s housing department, it is that interim use for which it is perhaps best known. As part of the PAMA complex the building will be used for studio programs and gallery space. 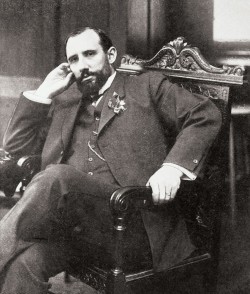 During the 1920s and ’30s flamboyant lawyer William Perkins Bull (1870–1946) published four books documenting Peel’s history. With a team of researchers, he interviewed people throughout the county and scoured cemeteries, church records and newspapers. Though somewhat idiosyncratic, the result is one of the most comprehensive local histories ever written – and a boon to local genealogists. The books, most of the research notes and a directory of the family names they include are available through the archives.

Bull and his wife were in England during the Great War and not only invited Canadian soldiers to stay in their home, but set up a small convalescent hospital for them. Canadian flying ace Billy Bishop was among the patients. This fall the museum presents an exhibition about the hospital called“All the Comforts of Home.”

Opened the same year as the courthouse, the county jail operated for 110 years until 1977. Although used primarily for short sentences, there were three executions at the jail. The first, in 1909, was a case of badly botched justice that resulted in the hanging for murder of recent immigrant Stefan Swyrda. Two more executions occurred in 1941 and 1946 before Canada eliminated capital punishment. Barely escaping the wrecker’s ball, the jail was renovated in 1985 to accommodate the Peel Museum and Archives. As part of the latest renovation, the old exercise yard with its 20-foot stone wall will become a garden. Now the Georgian-style building constructed of local limestone and Credit and Etobicoke river stone is one of the most attractive elements of the PAMA complex, but the museum maintains three tiny cells as an exhibit and reminder of its grim past. 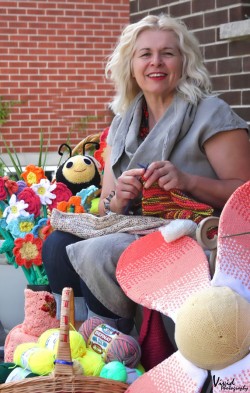 Fabric artist Sue Sturdy is co-ordinator of the Colourful Roots exhibition in the Tunnel Gallery.

As part of the renovation, an underground tunnel now links the art gallery with the museum and archives. The wide, skylit space not only allows easy passage for staff, visitors and schoolchildren during inclement weather, but will serve as additional gallery space. To mark the opening of the new complex, the first exhibition in the tunnel is a show called “Colourful Roots: A Journey to the Secret Garden.” Co-ordinated by fabric artist Sue Sturdy, the fibre garden installation is a nod to Brampton’s horticultural heritage as “Flower City.” It includes works created at a public “yarn storming” held on the PAMA grounds this summer.

The most visibly striking architectural feature of the PAMA renovation is the three-storey glass atrium. Designed to re-orient the gallery entrance back to Main Street, it visually links the courthouse to the complex, both outside and in – one wall of the courthouse is framed from the atrium lounge by a huge glass wall. The airy reception lounge also looks over the flat roof of the hydro building, where a rooftop garden is planned, and beyond to leafy Gage Park on the opposite side of the street.

PAMA offers a wide range of family and school programs, including opportunities for families to drop in and make take-home projects on Saturday and Sunday afternoons, 1 to 5 pm, from October through December. Among the many other activities coming up are two Halloween-themed workshops on costume-making and horror makeup, and a Christmas workshop on making gift wrap. The PAMA website also offers online creativity with a virtual artists’ game and a game in which kids can identify simple objects in the museum collection.

Coming to PAMA this fall

Although the Peel Archives will not be fully open until February, the Museum is ready to go with several exhibitions this fall, including:

For a full list of current, upcoming and online exhibitions, adult and children’s programs, and community projects, visit pama.peelregion.ca