It is fair to say their discovery of a woman in the neighbourhood who traps raccoons, fixes floods, cleans the house and ploughs the driveway was also a revelation in its own way. 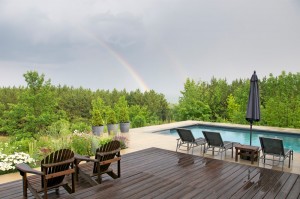 A two-tiered terrace leads to the pool, extending the sightline through the house to a virtual horizon dropping into the woods below. Photo by Pam Purves.

What would an ultra-urbanite want with a home in the country? Well, a man who is much in demand, whose life is urbane and fast-paced, who is on top of issues, fashion and the arts sometimes just needs a place to get away from his wonderful life. It’s exhausting.

But why would a man whose life is full of decisions and responsibilities decide to build?

Others who have been lured to the Mulmur hills can probably answer that question. Less than two hours out of the city, the twists and turns of the Niagara Escarpment lead to unexpectedly dramatic views of limestone cliffs, deep ravines and densely wooded hillsides, punctuated by the faraway sound of running water and, sometimes, the call of a golden eagle. Mulmur hosts some of the most surprisingly beautiful folds in the Escarpment, many of them hidden from roadside view. The visiting urbanite stumbled upon these treasures and found his life changed suddenly and irrevocably.

A local real estate agent sagely asked if he were a “percher” or a “nester.” He promptly identified himself as a “percher,” and thus began the hunt.

The chosen property, the north slope of a forested valley, is a remnant of the Ice Age – a great pile of clay, sand and boulders, with no services and within the planning area of the Niagara Escarpment Commission. Everything had to be conceived from scratch and with the painstaking participation of the NEC. But what a view!

It was a big leap, but as a friend said, “Do it. In five years you’ll think it was the best decision of your life.” He did, and it was.

It turned out the property was next door to Christopher Wright, co-founder of Figure 3, a Toronto-based multidisciplinary design firm. His modernist home with its simple, clean lines became the model to start a conversation about design – a bit of serendipity that led to many long evenings of wine and talk about space, location and life. For the owner, a keen student of architecture from Palladio to the present, it was the beginning of the fulfillment of a dream. 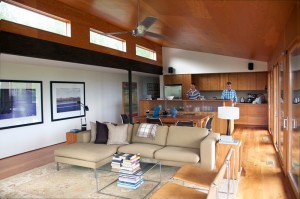 The open living/kitchen area makes it easy to simultaneously prepare food and participate in conversation with guests. Photo by Pam Purves.

The design was initially driven by the idea of a place to read and display artwork while effortlessly enjoying the great view. He had visited similarly modernist country places in the same area and was taken by the way they both framed their surroundings and settled into them unobtrusively.

The concept – a co-production of the designer, the owner and local contractor David Simpson – was for a contemporary cabin or prairie house – a minimalist structure using unexpected materials to add character, an indoor/outdoor aspect to take advantage of four seasons, and blank walls oriented north and west for protection. The slope of the site invited two levels but ultimately accommodated three. From the entrance, the simple, flat-roofed rectangle appears to be a single-storey bungalow. Inside, a few steps and a well-placed wall mark the divide into three storeys, virtually invisible from the outside.

The exterior materials – dark grey concrete block, wood siding stained black and glass walls – reflect or mimic the landscape. Interior materials, such as the refined plywood used in the ceiling, remind the owner of a camp cabin.

The multilevel area is home to a master bedroom, den and bath with wide views and walkout, and meadow-level guest rooms. The main level flooring is a seamless sweep of cherrywood from the entranceway through the kitchen, dining and living areas, resolving at the far end in an architectural fireplace and walls of glass. The space opens along the entire east side of the house to a generous gallery porch.

“The interior success is the experience of guests,” says Christopher Wright. “With the strong indoor-outdoor connection people can maintain companionability through both spaces – never out of sight or sound.”

A recently installed saltwater pool completely altered the perspective from the living area. At the south end, a two-tiered terrace leading to the pool extends the line through the house to a virtual horizon dropping into the woods below.

Sitting by the pool provides the opportunity to admire the shameless preening of a scarlet tanager and indigo bunting who alternate in starring roles at the top of a nearby elm – an avian Auntie Mame and Mama Rose.

In fact, wildlife has seriously interrupted the planned reading time. Deer appear in the meadow, and along with the buntings and tanagers, vultures, hummingbirds, pheasants, wild turkeys and coyotes have stolen countless hours from the original lifestyle plan. Recently the owner looked up from his reading and locked eyes with a coyote, its nose pressed against the porch window. It’s hard for a book to compete with that. 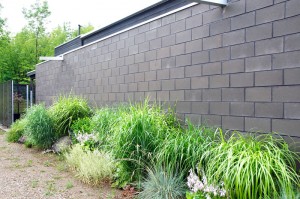 Developing the gardens around the house has become a passion for the ex-condo-dwelling owner and his partner – “the Lettice and Lovage of Mulmur.” Photo by Pam Purves.

Over time the single life gave way to couple’s life, and his partner introduced new ideas and a new esthetic element in the garden. Now the pair of formerly condominium-dwelling non-gardeners have become the Lettice and Lovage of Mulmur. Gardening by trial and error – one consumed by the graphic potential of single plantings and the monochromes of ornamental grasses, the other by colour and rhythm of timed blooming – they have revelled in their victories and defeats and created outdoor rooms with personality.

The country has also changed their idea of art. Not long ago they noticed a large baler wheel rusting in a neighbouring farm field. It seemed the perfect object to create a focal point in the long east-sloping meadow. The only way to move this treasure from one property to the other was to roll it up the hill. A neighbour who helps them with winter ploughing was astonished at the sight, “I thought I’d seen it all. But, two gay guys from Toronto rolling a hay baler up a hill is new to me.”

It is fair to say their discovery of a woman in the neighbourhood who traps raccoons, fixes floods, cleans the house and ploughs the driveway was also a revelation in its own way.

It is not unknown for places to change the people who come to them. The initial idea of quiet and simplicity has given way to dinners with friends, leaps in the pool and general exuberance. Not exactly what was anticipated, but ideal nonetheless. 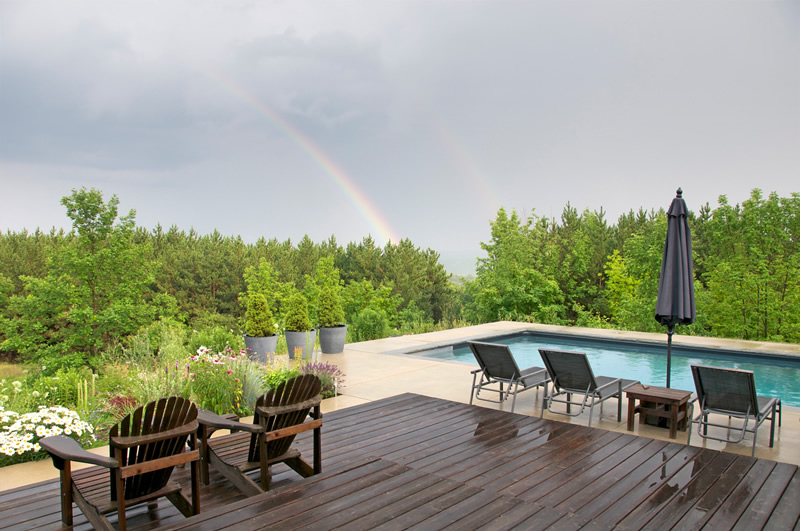 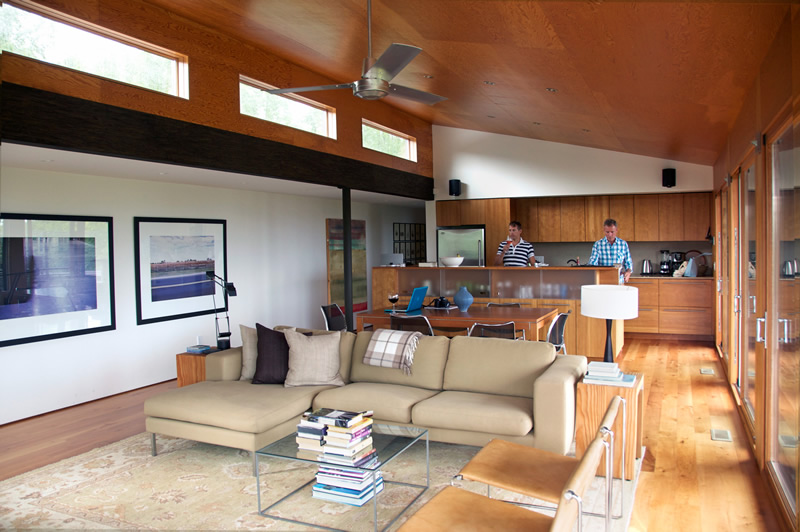 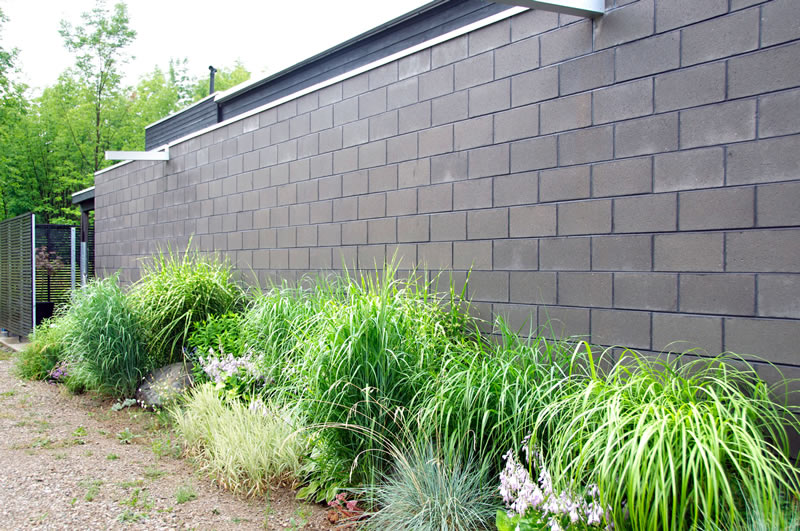 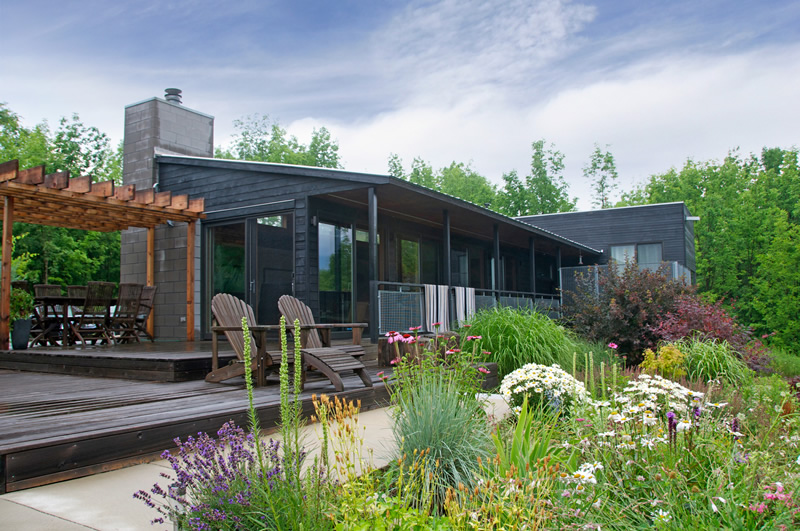 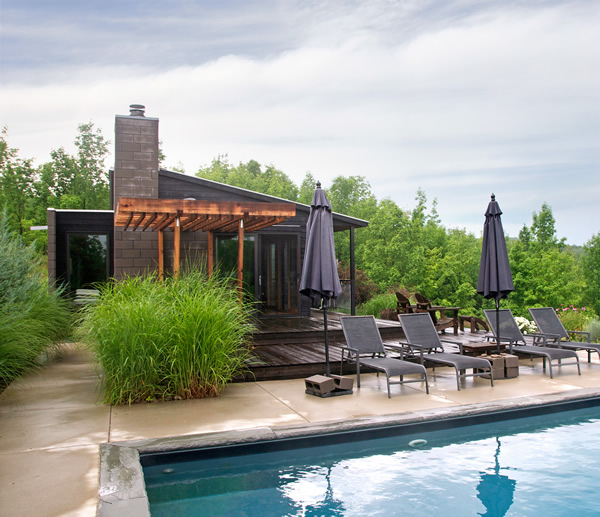 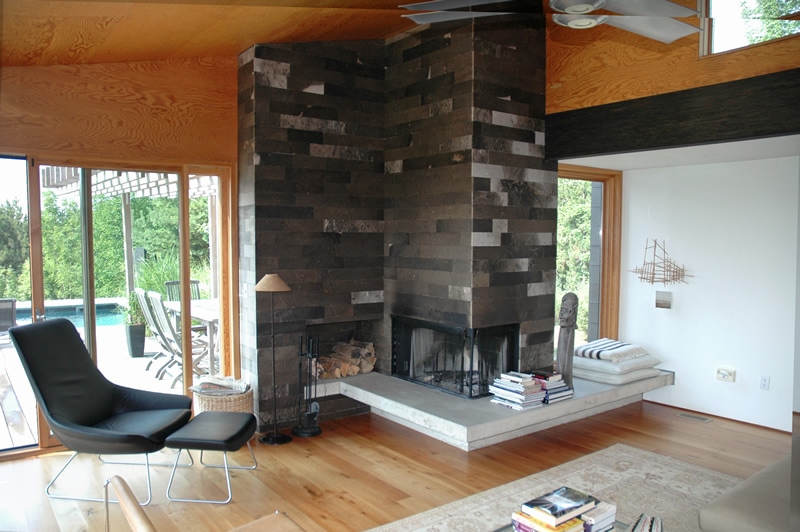 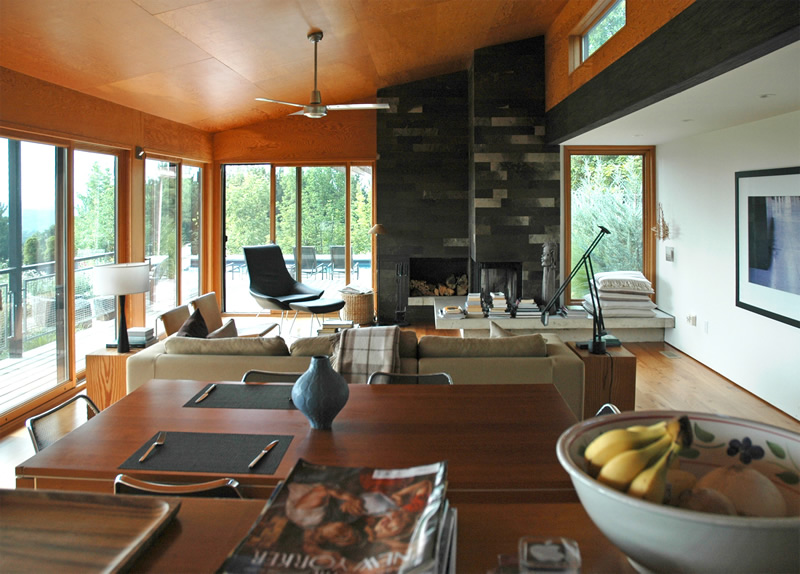 <
►
>
Generous use of glass on two sides of this compact, 2,ooo-sqare-foot dwelling blurs the border between indoors and out, while solid walls oriented north and west protect the geothermally heated house from the prevailing winds. Photo by Pam Purves.