Friday October 5 – Cody has been on the trail for 10 full days.

5:30 pm – Friday evening: We are currently in Waterdown and Cody has about 19.6km to go for the day. He is feeling tired and slightly light headed. Blog post will follow later this evening.

chal•lenge (ch l nj)
n.
1. A call to engage in a contest, fight, or competition: a challenge to a duel.
2. A test of one’s abilities or resources in a demanding but stimulating undertaking: a career that offers a challenge.

Cody started out on the trail this morning at 6:30am. He covered 60km today ending in Hamilton. Today was a tough day in regards to fatigue. Most days Cody will get 2nd and 3rd winds throughout the day, however he couldn’t seem to kick that sleepy feeling. However he still had some wits about him. I’m sure you all tuned into CHCH Hamilton News at 6:00pm, Cody put on a brave face and really delivered from the heart.

Many family and friends came out again to help him run this part of the trail. He was really pushing himself today, taking sandwiches on the go and stretching on the side of the road. Cody ended with a hot bath and passed out with a bowl of pasta on his lap while he was having bandages applied to his ankles. Still even in his sleep, he dreams of the trail, constantly moving saying in his sleep “keep going, keep running”.

I will be sure to update as much as I can for day 12 to ensure everyone who would like to come out to support Cody at the finish line can. The location is in Queenston at the Southern Cairn on Portage Rd. Currently we are anticipating the record breaking end on Sunday October 7th.

Good evening everyone, Until tomorrow…

Quotes of the Day
“ Man, I have eaten so many baked goods during this expedition, I should run the Bruce Trail
I hear it’s a good workout”
-Alli

“Oh sorry, my math on the distance is wrong, I hurt my achillies” –Kyle (Hunter)
“…and it affected your brain?” – Alli (Gatherer)

“are you done with page 10 of the Map…I am out of t.p”
– Cody Gillies (completely serious)

The Bruce Trail is the oldest and longest continuous footpath in Canada. It runs along the Niagara Escarpment from Niagara to Tobermory, spanning more than 855 km of main trail and 400 km of side trails.

Fundraising status as of October 5, 2012 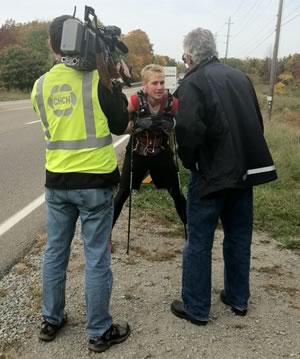 Friday afternoon – Cody being interviewed by CHCH news in Hamilton

So apparently I spoke too soon when it came to replacing parts…don’t panic, I’m not talking about Cody. If you have been an avid follower of Cody’s progress you may have heard of his sage green 1973 Volkswagen Bus. Or maybe you have seen the countless photos posted. Regardless, the bus is our saving grace (and Cody’s pride & joy, no pressure though). Without it, going from stop to stop would be extremely difficult with all of the items and treatment Cody requires. Cody is so attached to his bus they even share some of the same traits, both seem to be falling apart

That being said, the End to End Challenge needs to send a huge thanks to Total Mechanical in Orangeville. We made an emergency stop between one of Cody’s check points today and it’s a good thing we did. The mechanics were amazing in mending one of the biggest members of the support team. The one pit stop we did have to run without the bus was slightly chaotic. Thank you all again and again, I know how busy you guys are! It means so much to us and you made these last few days easier in handling transportation.

Cody ran through Kelso Conservation yesterday and had his most improved day as he whistles along (literally). While running he commented “I feel like I am on a training run with a few friends”. We stayed at the Mohawk Inn and Banquet Centre, only a 7 minute drive from the trail. Thank you so much to all of the staff there. Everyone was very interested in the story and amazed at what Cody is accomplishing. Thank you to Lyn for washing his clothes

Aunt Kim is currently working her magic on Cody stretching him out as much as possible. His hips and ankles seem to be the nastiest areas. Running Free donated a new pair of compression socks yesterday. Ladies extra small. If that doesn’t keep the swelling down I don’t know what will. Jokes aside, witnessing Cody pull his socks on and off is one of the hardest parts of this task.  His spirits are up despite how much agony his body is in.  It’s enough to inspire anyone and I hope that you all are.

Good evening everyone, Until tomorrow…

Quote of the Day-