A Place for the Deserving Poor

Males and females, including married couples, slept and ate separately.

‘House of Industry and Refuge’ was the name officials used for a county home for the indigent, but everyone, even the people who lived there, called it ‘The Poorhouse’ or ‘The Farm.’

When the Ontario government passed legislation in 1903 obliging the province’s counties to provide a shelter for their “destitute, homeless, feeble-minded and elderly,” two “Houses” were already up and running here in the hills. Wellington County was way ahead of the statute, having built a refuge in 1877, and Peel had opened one in 1898. There was no House in Dufferin. Here, the “deserving poor” went to jail.

Over the 20th century local poorhouses gradually became homes for the aged. Wellington’s House was renamed The Home for the Aged in 1947 and served as such until 1972. In 1909 Peel allowed Halton County to share its House, but in 1952 Peel re-established sole ownership of what by then had become essentially a home for the aged, and so it was called. Following major additions and reconstruction, it became Peel Manor in 1960. Dufferin (which as early as the 1890s had talked of sharing a House with Peel or Grey counties) never did build a refuge. The “deserving poor” were housed in the county jail until the 1930s.

It is easy to understand why Dufferin’s accommodation was truly a shelter of last resort, but to the average citizen any House was a place to be shunned, for no matter that food and shelter, even medical care and clothing, were provided, residency meant you – and your family if you had one – wore the social badge of failure and would be treated accordingly. At Wellington’s refuge, for example, as a new arrival you were admitted through the front door, but would never use that door again.

By standards of the day, treatment was humane, but residents – officially they were “inmates” – lived institutional lives. The regimen at Peel’s refuge was typical. Males and females, including married couples, slept and ate separately. To leave the House required permission with a fixed time of return. Inmates rose at 6 a.m. in spring and summer and retired at 9 p.m. – winter times were adjusted slightly – to work the farm that was part of the complex. A poorhouse was meant to be self-sustaining, and produce was raised for consumption and sale.

Inmates were subject to the command of a keeper and a matron (usually the keeper’s wife), both of whom supervised the cleaning and maintenance labours expected of their charges. The keeper did a lights-out bed count each night, and could “inflict suitable punishment at his discretion for disobedience or bad conduct.” In Peel, punishment was “not more than 24 hours confinement” (usually on bread and water), unless the county inspector directed otherwise. Life at The Farm was not quite prison, but close. 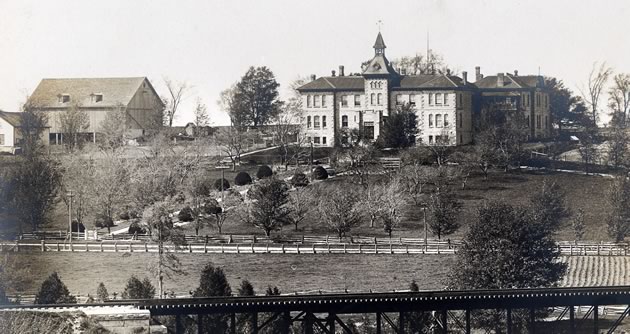 A Parsimonious Thank You?

Miss Jane Porter died in 1896 and in her will left Peel County a sum of $4,000 to be used toward establishing a refuge. Her bequest together with a provincial grant pretty much covered what it cost county council to buy 50 acres of land in 1898 and build Peel’s House of Industry and Refuge. For the grand opening, council passed a motion authorizing a memorial tablet to honour the generous Miss Porter, but specified the tablet was not to cost more than $15.

Who were the “deserving poor” – for so they were called – submitting to this regimen? The annual reports of Peel’s physician, Dr. Charles Moore, offer a glimpse. His 1901 report, for example, has a death list – Mary Linsky, 100+? (old age), Robert Shurtleff, 65 (admitted homeless), George Anderson, 70 (chronic hepatitis), John Freel, 80 (senile heart) – that suggests most of the 26 inmates that year were elderly and ill. This was often the case, but not always. The 1900 report also includes the birth of a male child to an inmate (age 19, unnamed) and describes three children under five. In 1913 there were 35 inmates in the refuge and five of them, all “of weak intellect,” were of widely different ages.

Refuges were restricted to local citizens (Peel’s requirement, for example, was a verifiable minimum of two years residency in the county, and admission was controlled by the individual’s township or village), but one positive for inmates was that they were not sentenced. They could leave. And records show that, except for inmates “of weak intellect,” a stay at The Farm was usually temporary. Most of those admitted as children simply left when grown.

Some inmates, such as Mary Jane Everson, were victims of temporary circumstances and tended to come and go. In 1889 with her husband too ill to work, Mary entered Wellington’s refuge with three children. They stayed just over a year, left, came back again, then left for good. One of the children, however, returned while still a teenager and stayed the rest of her life.

Mostly it was the unwell and the elderly with no family – or family who didn’t want them – who never left. In a stinging editorial in 1892, directed at Dufferin’s lack of a dedicated refuge, the Orangeville Sun listed the names of 32 non-criminal inmates who had died in the county jail over the previous decade. Most were chronically ill seniors with no one to care for them, and all but a few had long tenure as inmates. Elizabeth Hill was typical. She had been there ten years, and according to the Sun was never once visited by her family in Amaranth. Elizabeth died at 92 in a tiny jail cell, ill and unwanted.

In 1876 the provincial government established both the Hamilton Asylum for the Insane (intended originally to treat alcoholics, but soon converted to a facility for the mentally ill) and the Orillia Asylum for Idiots (later renamed Huronia). Counties with or without a poorhouse typically sent their most challenging cases to those institutions.

It Was All About Cost

Every Dufferin newspaper harped at the county’s reluctance to provide a House, pointing out that more often than not the jail’s sole residents were simply vagrants who belonged elsewhere. (The county used a legal dodge – candidates for a refuge were convicted of vagrancy so they could be housed in the cells.) Yet the reluctance was not without support from voters. Lingering age-old beliefs, not unique to Dufferin, held that poverty was a result of moral failure, and that the elderly and disabled were a family responsibility. (The Dufferin Post angrily pointed out the uncertainty of family support when Mary Ann Smith, an elderly inmate/vagrant, died in the jail in 1900. A mother of eight, she was utterly neglected by her family, specifically, the Post noted, by a son who farmed mortgage-free on 200 acres near Glen Cross.)

The sociology of poverty, however, was but a sidebar to the issue of cost. Whether it used a refuge or a jail, a county’s administration was focused on expense. Peel’s 1899 report fretted that total expenditure for the opening year was $1,477 against just $307 in revenue from produce sold, creating a weekly cost per inmate of $1.42. By 1900, this weekly cost was wrestled down to $1.21.

Similar concerns appear in the records of every Ontario refuge. In these records, expense invariably gets more space than inmate matters. And perhaps that’s not surprising. Even today cost remains an overriding concern, even though poorhouses have long since been replaced by a web of supports that would astound the inmates of yesteryear.

Those inmates would be even more surprised to learn the fate of the refuges where they once lived. Wellington’s home is now the county’s museum and archives. On the site of Peel’s former House is Peel Manor, a modern long-term care centre, while in Dufferin the former jail has been converted to offices for county staff. Former vagrants might find that last change just a touch ironic. 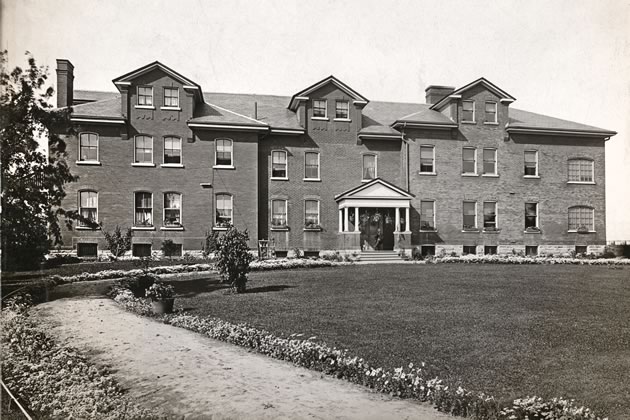 Caledon writer Ken Weber’s best-selling Five Minute Mysteries series is published in 22 languages. Ken is also the Historic Hills columnist and puzzle meister for this magazine and has a loyal following here in the hills.
Show 2 Comments