There’s nothing more exciting than the chemistry of getting in a room and playing with people.

A midlife crisis set to music

Every midlife crisis has its fascination. There are the time-honoured classics – buying a Porsche, skydiving, an affair. Some people quit jobs to circumnavigate the globe, lose weight to run a marathon, gain weight without giving a damn. One of my all-time favourites is the anti-crisis of one jet-setting friend, who at 50 finally had a kid, adopted a golden retriever and leased a Volvo.

Alas, the revelations of the aging come in all forms. Mine took the shape of a six-foot wooden hourglass with strings, and thankfully, it took place amid the eclectic, embracing community of Orangeville’s Aardvark Music & Culture. 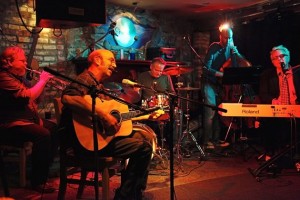 The Houseplants playing at C’est What? in Toronto; Perry Joseph on guitar and Gordon Shawcross on keyboard. Photo by Liz Beatty.

“So here’s the thing,” I say as I lean into the store counter. Gordon Shawcross, Aardvark fixture and singer, piano player and songwriter with The Houseplants, looks on kindly.

“Now, I’m not even sure this is possible,” I add. Gordon’s encouraging smile remains in place as I measure my next words. “Well, you know my thing for jazz standards.” Earlier, I had confessed my fondness for midday living-room singing – yup, I’m a closet diva, complete with mike, amp and imaginary adoring fans. “I’ve just always loved spare jazz accompaniment – it’s the emphasis on articulation.” What? Does this even make sense? Lights flash in my brain. Abort! Abort! It’s too late. “Gordon, what I really want is to play the double bass.”

Instantly, I am transformed. First, no veiled smirk. Second, he called me a chick. I could kiss him.

“The upright bass does something entirely different for me,” he continues, now my kindred spirit. “It’s such a defining sound that I don’t even use an electric bass anymore.” He expounds on upright bass legend Danny Thompson and how he was drawn to Thompson’s sound on completely different recordings long before he knew the bassist was the same guy. He refers to Esperanza Spalding as proof that one can play and sing, although we agree she may be a tad exceptional.

The upshot? In these few moments of patient listening and shared interest, I’ve stepped into Aardvark’s rich musical world. No cool quotient required, no proving my technical worthiness. Just sincere enthusiasm as I start my journey. And though I always appreciate tender handling of my half-century ego, I know first-hand that this open creative spirit is the way life at Aardvark rolls.

Aardvark’s location smack in the heart of Orangeville’s Broadway strip seems perfect for an establishment that is, in many ways, the heart of the area’s musical community. Part musicians’ general store, part pop-culture observatorium and part teaching/jamming coffee house (free java for patrons), Aardvark opened in 2008 and has been, most of all, a meeting place for musical minds of all ages and skill levels.

“There’s lots of days when four or five local songwriters end up here, sitting and dialoguing about whatever,” says owner Perry Joseph, who is also a singer, guitarist and songwriter with The Houseplants. A regular schedule of live shows occupies the performance area at the back. Some of the performers are also instructors, people who do and teach. “We like the idea of linking students to the local music community, giving them real-world connections,” says Perry. 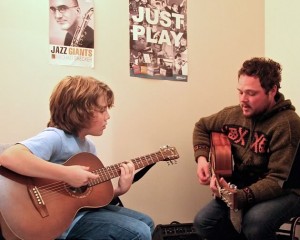 Perry scopes out the unique aspirations of each new student. His first question? “If you could wave a magic wand, what kind of music would you be playing now?”

“We have folks who just want to strum a few tunes around a bonfire at the cottage, and some with bigger dreams, different musical IQs,” he says. “There’s no set type of curriculum, no one type of teacher. Nothing cookie cutter.”

Case in point: Perry matched my now 13-year-old son Mack with Justin McDonald, an accomplished songwriter and performer. Long on song ideas and short on the discipline needed for formal practising, Mack jams and writes with Justin every Wednesday at 4 p.m. – without a prescribed guitar workbook.

Then there’s cool, quiet, 17-year-old Sam Nassey. Sam has been playing classical violin since he was three and teaching octogenarian Theresa Proudluck since he was 14. “Beyond music, the two have bonded over their searing sardonic wits,” says Perry.

Sophie Castel, Aardvark’s most advanced Royal Conservatory piano student, studies with multi-talented Dennis Hahn, but she’s also a teacher whose keen skill and intuition have enabled her to take on the unique demands of students with special needs.

Perry knows first-hand the draw of such a diverse creative environment. Growing up, he shared his sister’s impressive collection of Motown 45s, and his Lebanese father, a radio personality, brought over top Arabic music acts for every church hafli, events Perry describes as parties where people eat, drink and dance – all at the same time.

The performers stayed with Perry’s family. “It was the equivalent of having a Lebanese Barbara Streisand in your home,” he says. “Funny, only recently did I recognize this ethnic influence in my own reggae leanings.” 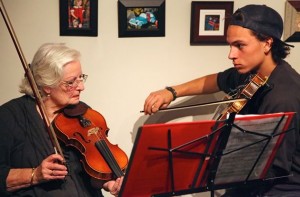 For everyone at Aardvark it’s all about their musical neighbourhood. “There’s nothing more exciting than the chemistry of getting in a room and playing with people,” says Gordon. “There’s nothing elitist about it. Anybody can and should make music just for the pure joy of it.”

Speaking of pure joy, Perry has since found me a beautiful little restored double bass and set me up with Zen upright master Rob Uffen, whom I now torture once or twice a month with my cautious pizzicato plucks. I’m just a few lessons in, but already the left-right brain integration is so intense that I fear my head may explode like an Austin Powers fembot – though in a totally good way. I wonder if Esperanza spent this much time perfecting “Happy Birthday.”

And who would have thought that getting to know the lovely battle-worn curves of this new old friend could impart such wisdom? In embracing my midlife uncoolness, I may be, well, becoming more cool. And doesn’t every age have its paradox to unravel? Whatever your obstacles, whatever your vortex en route to creative bliss, I hope you find a community like Aardvark – people who will listen intently to your heartfelt plans, say “cool,” then call you a chick.

Liz Beatty and family live and jam in Brimstone. A regular contributor to National Geographic Traveler, Liz has also begun blogging about special places for In The Hills. In her inaugural post, musician Rob Uffen, also a master fly fisher, begrudgingly reveals some truths about the best local fishing holes.