Last winter, my son took a sommelier course from the restaurant where he works in the city and came away from it very excited about cultivating grapes and making his own wine. Because the terroir of his ancestral student walk-up lies in the shadow of a condo high-rise, it is not particularly favourable to viniculture. He came home one weekend early last spring and asked, “Why don’t you plant some grapevines here on the farm, Dad?”

I gave him several reasons. The harsh climate of Nottawasaga Township long ago drove the polar bears north and the rattlesnakes south. It is true that, for maybe two weeks in July, the place feels like the south of France. Gentle zephyrs waft down over the pastures, caressing the softly lowing cows and gentle sheep. This is when most of the real estate is sold up here.

But for the rest of the year, it is like Nottawasaga Township. The northwest wind gathers speed on the trip from Winnipeg, hurtles over the ice of Georgian Bay, and the first obstacle it smacks into after 1500 miles is our farmhouse.

“That’s actually a good thing,” said my son. “Grapes like constant air movement. Look at the mistral wind of Provence. The grapes thrive on it.”

He had a point. The mistral is le vent du fada or “idiot wind” which blows for weeks at a time, clearing the air of every speck of dust and moisture, and protecting the noble Chardonnay and Cabernet vines from disease. The clarity of the air and the light is what brought the French Impressionist painters to Avignon and Arles. The mistral has inspired much beautiful poetry and has become as important to Provençal culture as food and wine.

A little bit of poetry has been written about our northwesterlies (but because of the excessive use of profanity, none of it has been published). We, too, have our own colony of landscape artists. And because of climate change and new grape varieties, wine production is actually gaining a firm toehold here.

And so I warmed to the idea of grapes. My son outlined his plan, which was fairly simple. He would provide the expertise and I would do the work. He would be the elegant oenologist with book and tasting cup and I would be the simple, cheerful, ruddy-faced paysan with pruning hook and shovel. We visited on the phone every week about varietals that might do well on heavy clay soils that are occasionally buried six feet deep in snow or raided by marauding sheep.

“They say sheep are great at pruning the leaves off the vines and they never eat the fruit,” he assured me. I’m not sure about that. Some days my sheep would eat the tires off the truck.

My son inclines toward the refined Cabernets and Chardonnays that grace the linen-covered tables of his restaurant, but our adviser at the Niagara vine nursery explained to us that so far climate change has merely extended the period when vines are exposed to early and late frosts. She predicted we would be skunked every few years with the old European varieties and urged us to pick a hardier vine. I scanned the list and found the Baco Noir. 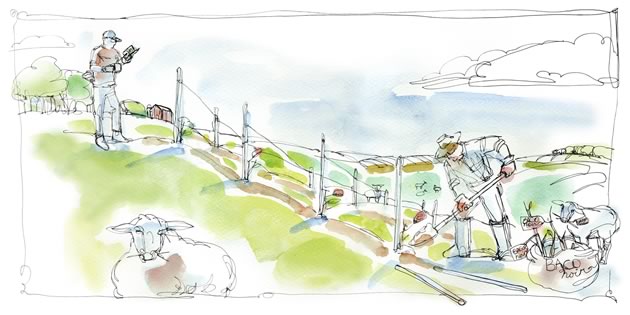 The Baco Noir is tough, grows anywhere, and will survive extremes of cold and heat. It is vigorous but erratic and sometimes difficult to control. Illustration by Shelagh Armstrong.

“This is not one of those aristocratic Old World grapes, which can be fickle and delicate,” she explained. “The Baco Noir is a blue-collar grape. It is tough, grows anywhere, and will survive extremes of cold and heat. It is vigorous but erratic and sometimes difficult to control.”

This is a pretty accurate description of my wife’s family who have been farming these hills for five generations. Baco Noir sounded like a very promising choice.

“But will people drink the stuff?” I asked.

Now that the vines are planted, there is more reading to do on the veranda. My son is studying Northern Winework: Growing Grapes and Making Wine in Cold Climates. I just finished The Worst Pests of the Vineyard. As I expected, sheep are on the list. So are deer, skunks, raccoons, birds, squirrels, mice, mites, thrips, phylloxera, and a host of one-celled fungi.

Eternal vigilance will be the price we pay for a glass of plonk.