Ruin in the Woods

Midway, a squared stone tower reached up to the forest canopy. The filtered bits of light from above, the impossible green of the deep forest, the mystery of what and who…

What are your special places in the hills? These are the stories we want to celebrate here. Those beautiful, wild, or quirky spots. The neighbourhood diner, the ruin in the woods, the hidden lake. Whatever they are, whatever makes them remarkable, we want to know what keeps you circling back — what makes these local touchstones so important. 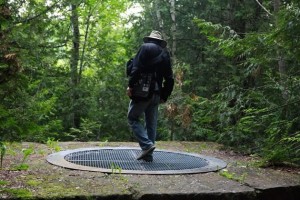 Looking down the now covered hole that held the massive kiln smokestack. Photo by Liz Beatty.

Moving day from Toronto, November 1994 — It was no accident that the first time we used the fireplace in our little cabin on Forks of the Credit Road, smoke billowed uncontrollably from its old stone hearth. We’d learn why a few weeks later while exploring the wooded wonderland up the escarpment’s south face between two local landmarks — the train trestle and the switchback.

Just beyond our property’s southeast boundary, yards before the train tracks with no path or sign of human activity, we stumbled on a breathtaking stone ruin, utterly engulfed by this moist lush forest.  An eerie roofless corridor formed by 12-foot moss-covered stonewalls beckoned us.  At the base were alcoves that looked like ovens.  Midway, a squared stone tower reached up to the forest canopy.  The filtered bits of light from above, the impossible green of the deep forest, the mystery of what and who — Bob our neighbour would soon supply insight into this middle earth-like encounter.

He told us about the local quarries that provided the distinct red limestone for the building of Queen’s Park.  At the height of demand in the late 1890s, Credit Forks Mining and Manufacturing Company built the Hoffman Lime Kiln off the railway, just south of the trestle.  Following designs from Europe, a massive smokestack reached above the Escarpment ridge.  Apparently not high enough, however.  The kiln closed in 1899 after just three years in operation.  The powerful downdraft from the escarpment made it impossible to keep the kiln fires going or hot enough to do their job.   I can imagine their frustration.  The building and all was left to rot into the landscape.  It did.

Today, the Hoffman Kiln ruin is more accessible than in our first days in Caledon.   It’s the highlight of Bruce Trail’s new Ring Kiln Side Trail.

Know of any ruins or other forgotten landmarks (grown over or hiding in plain sight)?  As with our little cabin fireplace and the downdraft, knowing the past can only enrich what we know of the present.