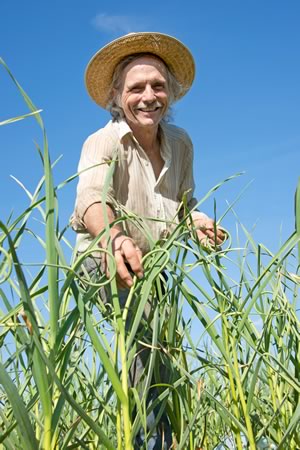 Andrew Sharko endured pestilence and drought when he first launched his garlic growing enterprise, but philosophically chalks it all up as a valuable learning experience. Photo by Pete Paterson.

In ancient Egypt, pyramid builders are said to have survived on a diet of beer, flatbread, onions and raw garlic, which they believed kept them healthy and gave them strength. When they threatened to strike because of a shortage of garlic, Cheops, the pharaoh at the time, had no choice but to import more – at a cost of about $2 million in today’s currency – or risk watching workers down tools and leave his Great Pyramid of Giza half finished.

When King Tut ruled, 15 pounds of garlic could be traded for a healthy slave. In Palestine, bridegrooms tuck a clove of this member of the onion family into a buttonhole to guarantee wedding-night bliss, and in Ayurvedic medicine, Allium sativum is believed to increase semen supply. And then, of course, there is garlic’s effect on vampires.

Add to all this the fact that garlic sells well in Canada and thrives in Ontario’s growing conditions, and you can understand why Andrew Sharko started cultivating it.

A self-described computer nerd from suburban Toronto, Andrew has been cultivating garlic since 2008 at Hidden Meadows Farm, just north of Caledon village. And though he was born in Germany, Andrew has had the unfortunate luck of the Irish.

“Everything that can go wrong has gone wrong,” he confided, as we sat on a pair of rickety antique chairs at a farm auction west of Orangeville. As I interviewed him and his partner Deborah Robillard, Mennonites in matching bonnets and long flowing dresses wandered by and tried to inspect the chairs we occupied. In the background the auctioneer sang out the bids.

Andrew was at the auction in hopes of finding parts for his aging farm equipment. “I never thought I’d become a farmer farmer,” he said. But clad as he was in a ball cap, jeans, a collared shirt and gumboots, he seemed every bit the part, right down to his greying hair and the admission that though farming is his passion, it’s his computer work that puts bread on the table.

For much of Andrew’s life, the family’s country property in Caledon was his second home. In 2000, when his mother threatened to sell the simple 750-square-foot house on 42 acres, much of it dense cedar forest, Andrew moved in instead. Inspired by recollections of his hippie youth in the 1970s, he figured he would get back to the land by planting a large vegetable garden. On the advice of his sister, he bought some garlic cloves from the grocery store and planted them, never thinking that more than a dozen years later he would still be harvesting the stuff. 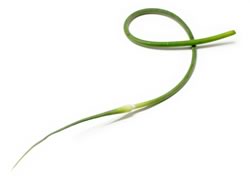 “That was my first foray into garlic,” he explained. The crop flourished, so he planted more. But his budding garlic-growing career aligned with China’s dumping of their cheap product on the Canadian market. Ottawa was slow to respond, and by the time it did, there wasn’t much of a domestic garlic industry left to protect. As a result, large farm operators have been reluctant to return to the garlic business – and this has left the field open to small producers, including Andrew, as well as Bart and Lisa Brusse.

The Brusses love growing the crop so much that they call their small enterprise LOVE Garlic. Blessed with a borrowed acre of land near Hillsburgh that has the sandy loam preferred by garlic, LOVE Garlic has thrived since day one. Bart’s skill in growing trees and Lisa’s sales and marketing expertise have proven a winning combination. “Bart and I have always said we could do great things if we put our heads and talents together,” said Lisa.

Every year the Brusses sell about 20 per cent of their crop at Toronto’s Garlic Festival. Friends and colleagues gobble up the stuff, and Janine Livingston takes as much as she can get to sell at her Broadway Farm’s Market on Heart Lake Road. 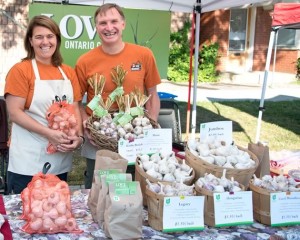 Lisa and Bart Brusse can be found selling garlic most Saturdays at Orangeville Farmers’ Market. Photo by Pete Paterson.

Janine and her husband Jim own the land where the Brusses cultivate their plants. “People are really disappointed at the end of the season when we’re all sold out of LOVE Garlic,” said Janine. “Some of them plant a few cloves to see if they can grow their own.”

Like most producers in Ontario, Andrew and Bart grow Music garlic, though the Brusses also cultivate a limited number of other varieties. Music is a “hardneck” variety that produces a tall, edible flower stalk called a scape. (Lisa turns some of the scapes into a delicious pesto.)

In addition to thriving in Ontario’s climate, Music garlic stores well, tastes great, and produces large, meaty cloves. Introduced to Ontario from the Adriatic area in the 1950s by Al Music, a former tobacco farmer, it is white-skinned with a pink blush and makes four to six easy-to-peel cloves. Like a curry dish that is packed with flavour without being too spicy, Music garlic, said Janine, “has a ton of flavour without being too garlicky.”

Andrew’s customers at local farmers’ markets are also keen to buy his garlic, but his success has come with a steep learning curve. Though he has avoided famine, Andrew has lost significant portions of his garlic crops to pestilence and drought. He also learned the hard way that storing garlic takes some care. But he is philosophical about the challenges he has faced. “Nature keeps giving me lessons,” he said, “so I’m hoping that I can help younger farmers because of my experience.”

Bart is likewise motivated by what he can teach others. He said he and Lisa started LOVE Garlic when their children were young. “I wanted them to understand the cycle of growing their own food.”

These days in Ontario garlic isn’t as valuable as it was in ancient Egypt, and for both Andrew and the Brusses growing it is more like a passionate avocation. At least it is so far – but all three dream of a day when their passion can become a livelihood.

Garlic likes sun and well-drained soil that is high in organic matter. This year’s cool, rainy summer delayed the Brusses’ garlic crop so their annual harvest was later than usual. This guide is adapted from the LOVE Garlic website.

Note: Plant in early October, about 4 weeks before the ground freezes. Here in the hills, Thanksgiving weekend  is the ideal time.

Note: You can leave some scapes on some plants to watch small seeds, which are really clones, develop in a pod. But because producing scapes diverts energy from making bulbs, the bulbs on these plants will be smaller.

Note: You can start using the bulbs as soon as they are harvested, but they won’t store well until they’re dried.

All Fall and Winter