Local Hero: Carl Cosack fought to save our land from quarry development.

Carl Cosack: One of our 2013 Local Heroes

The Highland Companies’ proposed mega-quarry in Melancthon was backed by a multibillion-dollar US hedge fund and powerful political lobbyists. Its early opponents were just a handful of farmers in a sparsely populated rural township.

It takes a unique person to describe that David and Goliath battle as easy. In fact, Carl Cosack remembers people saying, “This is not a fight. You’ve lost before you started.” But he never saw it that way. “I’m a Sagittarian and they say Sagittarians are just ultimately really positive people.” 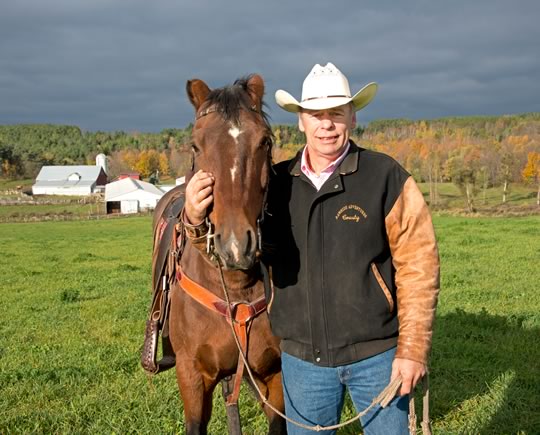 Carl Cosack fought to save our land from quarry development. Photo by Pete Paterson.

Carl came to Canada from Germany in 1975 to work the ranchland his father had bought years before. “It was just time for me to come on over and live my dream of being either John Wayne or Clint Eastwood, either the good guy or the bad guy, whichever way it best suited me.”

In early 2009 the North Dufferin Agricultural and Community Task Force formed to expose and fight The Highland Companies’ plans. Carl joined as vice-chair under the leadership of potato farmer Dale Rutledge. Two years later Carl took over the chairmanship.

As proprietor of Peace Valley Ranch and Rawhide Adventures, a grass-fed beef and agri-tourism business that teaches visitors how to be western-style cowboys, Carl is used to being the trail boss, guide, storyteller and educator, patiently elucidating rural ways to outsiders. So in many ways the mantle of anti-quarry spokesperson fit as naturally as his white cowboy hat.

He got private audiences with provincial politicians, and in the spring of 2011 appeared in Queen’s Park asking for an extension to the quarry application’s 45-day public comment period, which was granted. When the Walk to Stop the Quarry launched a protest at Queen’s Park, Carl brought four of his horses to graze on the legislature lawn.

The combined media and political buzz led to the province’s call for an environmental assessment of the quarry lands, and eventually to Highland’s decision to give up its plans, sell its holdings and disappear.

Few would call Carl’s role easy. It was beyond full-time, upwards of 50 hours a week of road trips, presentations, media interviews and late-night emails. Work on the farm languished and supportive family and friends took up the slack. But it was always inspiring being the good guy. “The mega quarry was just too crazy. This was one the few fundamental things you run into in life that’s just plain wrong,” says Carl.

Plus, there was lots of help. At NDACT’s post-quarry victory party, Carl earnestly thanked everyone who’d contributed. It took a while.

He especially thanks Dale Rutledge and the other volunteers on NDACT’s board, with characteristic modesty and the inevitable cowboy metaphor: “In the cattle industry the ones that follow are the ones that really determine which direction the herd is going.”

Next fall Carl will finish up his three-year term as NDACT’s chair, heading up its renewed mission – Food and Water First – to seek permanent legislative protection for farmland. Then, “I can go back to what I really love to do, which is raise Black Angus cattle and ride horses.”