Don Lobb has a remarkable ability to make dirt fascinating. Early in his farming career, Don developed an interest in the concept of no-till crop production, a way of growing crops from year to year without disturbing the soil through tillage. He has since become an internationally recognized expert in soil conservation and a pioneer in agricultural innovation.

Don was always an innovator, but his early experiences with adopting cutting-edge practices on his Huron County farm taught him that being ahead of the curve also entailed financial risk. “I almost lost the farm,” he says. 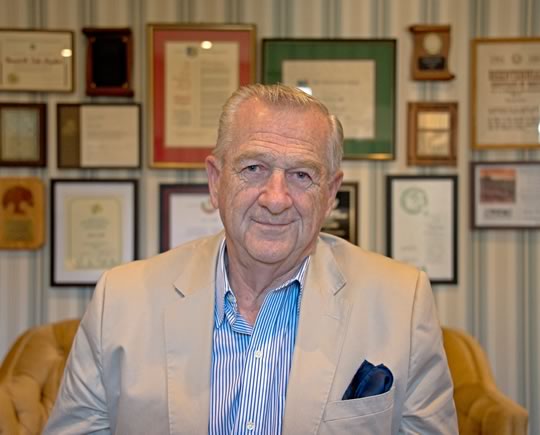 As a result, when he began to consider converting to no-till in the late 1970s, he approached the project scientifically, meticulously tracking various strategies and yield rates. His careful study proved that, contrary to the conventional wisdom of the time, no-till could deliver similar and sometimes even higher yields, while providing substantial cost savings and helping to prevent soil erosion.

Before long a group of farmers in his area had come on board, and within a few years, the University of Guelph had also taken an interest. Don’s farm became a hub of no-till research in Ontario, and over the next 17 years it provided a site for more than 50 different university, government and agri-industry research projects. Farmers came from all over the world to attend field days there.

In 1998, Don moved to Caledon and now operates Don Lobb and Associates, a company that specializes in designing and building sports fields and installing indoor and outdoor footing material for equestrian facilities.

Although he is no longer on the farm, Don remains very much involved in agricultural soil science. His gobsmacking 11-page CV overflows with committee memberships, research projects, papers and presentations. Equally impressive is a long list of accolades, including honourary life memberships in the Soil Conservation Council of Canada and the Ontario Institute of Agrologists. In 2012 he won Agri-Food Canada’s L.B. Thomson Conservation Award, which honours pioneers in soil and water conservation. He was also honoured with a Queen Elizabeth II Diamond Jubilee Medal.

Though the no-till revolution has taken off, the practice is still resisted by some large-scale farming operations. “Instead of using management, they’re using iron,” Don says, referring to heavy farm machinery. “But quick and easy is not a way to manage land.” Part of the problem is that some large-scale operators, who might farm 15,000 acres, often rent the land, so aren’t as vested in it. “It’s contributing to soil degradation and the loss of both organic matter and soil life.”

Don sees many challenges for agriculture and soil in the coming years. He views landscape restoration, which in this context means moving topsoil back to the tops of knolls, and improvements in soil moisture management as key topics. In the longer term, he supports the development of perennial food crops.

The most urgent challenge, however, may be “closing the nutrient gap.” Phosphorus, used in fertilizer, ultimately goes to waste in the world’s current food production cycle. “We’ve only got 90 to 100 years of known supplies of phosphorus left at current usage rates,” he says, predicting that when the supply is depleted, “the impact will be far more serious than running out of oil.”

Despite these challenges, Don is an optimist. “Of course I’m hopeful about the future,” he says. “We find solutions to every problem eventually.”