Jane Howard has been a nurse for 44 years, and though she doesn’t look it, she says she “qualifies as a senior citizen.” She is wise and sharp. Her confidence bathes you in the reassurance that she is competent, trustworthy and empathetic.

Her colleague Wendy McDonald is a newcomer, earning the status of ICU nurse in 2012 after returning to school to get a university degree and taking specialized training in critical care. 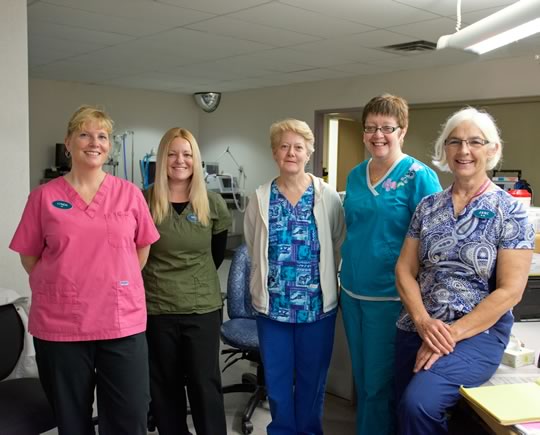 The two are part of the all-female nursing team who staff the intensive care unit at Headwaters Health Care Centre in Orangeville, made up of six full-timers, five part-timers and some casual staff. Theirs is a profession where every day human life hangs in the balance.

In 2012 the four-bed unit and four-bed step-down ward treated 592 patients. All were considered adults, though some were teenagers. Their medical difficulties were across the board, from disease to injury to simple old age.

But statistics tell only part of the story.

Every one of those patients and their families were in crisis, often dealing with the biggest challenge they have ever faced. In the midst of that crisis, it’s the nurse’s job to keep a calm head, monitor, analyze and correct unstable conditions, and most important, says Jane, “to fight for the patient.” That can mean contributing to the doctor’s diagnosis, dealing with families, and often “helping the patient fight for themselves.”

Though both nurses are effusive with praise for the doctors they work with, it is a relationship with the potential for friction. Multiple doctors can be overseeing the care of one patient, leading to confusion. Bringing doctors up to speed with what’s going on can also be tricky. “We see them 24 hours a day. The doctor might only see them for ten minutes,” Wendy says.

The ICU may be a place of deadly seriousness, but it is not a place of long faces or hopelessness. Despite the 12-hour shifts, stressful conditions and professional demeanour, the atmosphere is warm, there is a generosity of smiles and a sense of team spirit.

Advances in medical technology – the machines that go ping – are both a gift and a challenge. “In some ways it has made things easier,” says Jane. “When I started, sometimes I was crushing pills to make medicine.”

These days a multitude of equipment and pharmacology stands at the ready. While it’s all effective at extending life, many patients who in the past would have died now arrive in the ICU sicker and older, presenting more complex care requirements.

Jane also finds electronic charting to be a mixed blessing. “In the old days you just wrote a note on the chart,” she says. “Now we’re supposed to select from a series of check boxes. What if they don’t quite describe the situation?”

And as Wendy points out, all that technology creates a “need for continuous education” simply to keep up.

While the patients remain the primary focus, dealing with their families is another big part of the job. “The thing about ICU,” says Wendy, “is that we see families at their most difficult time. It brings out the best and the worst in people.”

Jane agrees. “It makes me appreciate my own family, seeing others struggle. Sometimes things that have been hidden for years come out.” Wendy nods. “We see some dark moments.”

Only two nurses are on duty at any one time. Perhaps understandably, family members in the grip of crisis can lose sight of the fact that a nurse might be simultaneously caring for three or four other patients, and demand exclusive attention. “They want your time,” Jane says. “So a lot of it is trying to keep families calm and informed.”

Unchecked, the stress could be crippling. From long experience, Jane says, “You have to learn to filter things out. In a way I’m fortunate. I have a nice long drive home that gives me some chill-out time. I’ve been known to punch the steering wheel.”

With fewer years under her belt, Wendy is finding it tough. “I’m not going to lie – sometimes I have found it a challenge to turn it off. It’s not an easy job. You have to love it, and if not, you should never take it on. Often you take it home with you.”

Both nurses rely on their workmates for stress relief. “The girls in ICU are a great team,” Wendy says. “It’s a very supportive system, and you really need that.” Jane concurs, “Everybody’s good. They’re all goers.”

Perhaps proof of that, staff tends to stay put and openings are rare. Prior to Wendy’s addition to the team last year, she says, “It had been quite a few years since anyone joined full time.”

While technological advancements may make it feasible to keep someone alive, everyone dies eventually, and sometimes the medical wizardry only extends suffering. “It can go too far,” Jane says of our life-at-any-cost culture. “Sometimes we do a lot more than is necessary.”

Diversity and socio-economic factors are also growing in importance, Jane adds. “We’re learning more about other cultures and faiths, having the respect to ask what’s important.”

“Another unique aspect of the job,” says Wendy, “is that we only see people for short periods. We don’t get to spend weeks with them. We get them stable for their next move.”

In fact, patients are often unconscious or awash in a sea of pain and painkillers, and have no memory of their time in ICU. “That’s okay,” Jane says. “As long as they’re up and living, they can forget about me.” Still, she adds, “We all love it when people come back later and say thanks.”

As a community, to all of you in the ICU, we do just that.