Nestled on a Hockley Hillside

Built like a little village, this house encompasses two visions of home. 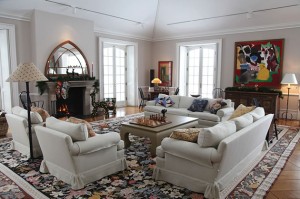 The living room is a warm, generous space capaciously designed for the comfort of friends, family and dogs.

This home is the special expression of two very different people who have found that its expansive setting in the Hockley Valley satisfies the longings of both – for space and privacy, for freedom and a close relationship with nature.

But each owner came to this place for particular reasons, and each brought a particular perspective to what was wanted in a home. One, a Canadian, arrived with a desire to reinforce childhood memories and experiences. The other, English by way of a Turkish upbringing and a Greek youth, brought a yearning for respite and a desire to showcase a collection assembled during a life of travel and adventure.

The house sits on a large acreage where nature is tamed in some places and left wild in others. The views can be both expansive and intimate.

The approach to the house, which perches on the edge of a steep drop into a fold of the Niagara Escarpment, is long and somewhat hair-raising, especially on an icy winter’s day. At the top of the first rise, the view explodes into CinemaScope as the sweeping landscape, covered by deep snow, sparkles in the late afternoon sun.

Formerly used for maple syrup production, the property is criss-crossed by footpaths still used by the family – and by strolling turkey and deer. Dotted with maple and sumac, the vast area slopes down to a valley and provides breathtaking views of rolling land and huge sky.

Though the owners have different ideas about living space, they share the same ideas about what makes a home work. A thinker and a doer of enormous energy, she needs a place to recharge – something cottagey and casual. He is a traveller and innovator who needs a canvas for his life and a place to bring family together to hear tales of high seas and hijinks. So communal spaces are large and lofty, with plenty of space for gatherings of extended family and large groups of friends. 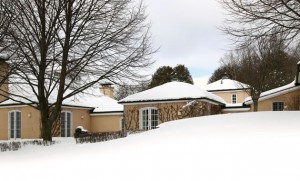 Designed by Toronto architect Bill Grierson and built between 1987 and 1988, the house nestles into a hillside.

Designed by Toronto architect Bill Grierson and built between 1987 and 1988, the house nestles into a hillside. Conceived as two main pavilions, which are punctuated by smaller constructions, the home’s elevations vary in a faint echo of the contours of the hill.

Both inside and out, the home feels like a small village, with large and small interior spaces set aside for distinct purposes, exterior courtyards that provide outdoor intimacy, a central internal pathway that links all and a boxwood-defined “common” that follows the footprint of the house. Parallel to the hall is the service passageway that provides space for pantry, coats and boots, and dog toys.

The north pavilion hosts the living, dining and kitchen areas. This square space is hip roofed with the interior beams and rafters on display. The ceilings are so high that building a wall to separate the kitchen/dining area from the living areas was impractical and would have appeared too monolithic.

The solution was to create an independent structure that would serve as bar and storage on one side and a wall for large paintings on the other. While allowing for flow, it also neatly provides privacy and forms a giant pedestal for an oversized sculpture that completes the height and adds surprise.

The living and dining spaces are bookended by large fireplaces that are centrepieces for winter decorating, adding the snap, crackle and pop of wood and its warmth to the ambience.

The south pavilion is the private space, including a generous master bedroom, bathrooms and walk-in closets, as well as an equally spacious second bedroom.

Connecting the two pavilions is a long, wide corridor that provides an ideal space for displaying some of the couple’s collection of 20th-century paintings. This corridor also links the pavilions to his and her studies. Reflecting their differences, his study is a richly appointed and warm-toned room with its own roof and sculpture garden. Hers is a bright, turreted height reached by a spiral staircase. Light and fresh, her study also provides a strategic platform for viewing activities at the front of the house and in the central hall. 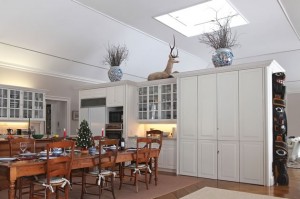 The sights and sounds of the kitchen are concealed by a massive floating wall that provides storage space on the kitchen side.

The Mediterranean influence may be the first thing that strikes visitors. The pale pumpkin-coloured stucco cladding and white trim with a cedar shake roof, the extensions that resemble a village-like cluster of buildings, the tile floors and counters and the deep window wells are reminiscent of Greece and Turkey. But the turret and the tongue-and-groove interior finishing are unmistakably southern Ontario. Uniting the elements is a simple device: a chair rail – another nod to Ontario style – that runs at the same height throughout the house.

An original statement for original people, the house is undeniably large and rather grand, but it feels like a home – a home with a palpable sense of humour. For example, in a birch copse near the house stands a life-sized fibreglass cow. It was a key early purchase for the owners, who smile and say that if the house is to be called “the farm,” there must be an animal.

Christmases are always celebrated around the living room fireplace with a giant tree covered in decorations that have been made, found and given to the family. Each has a story and place in someone’s heart.

On Christmas Eve the stockings are “hung by the chimney with care,” and everyone awaits the inevitable first flakes of snow in the bay window alcove. Presents are opened. Stories are told. And the house is so peaceful that deer have been known to come to the window for a look at the human exhibits inside. 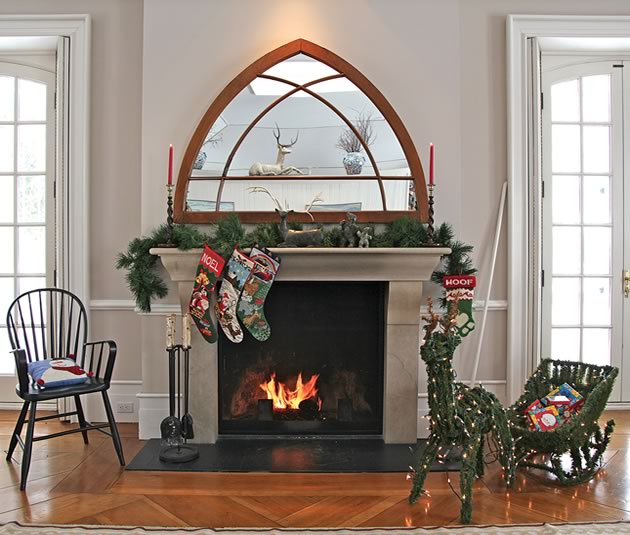 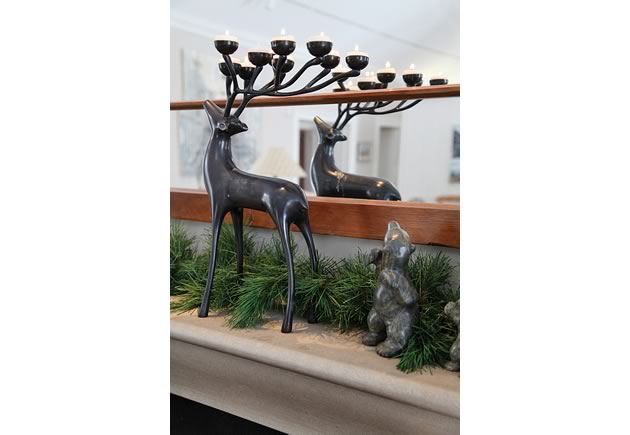 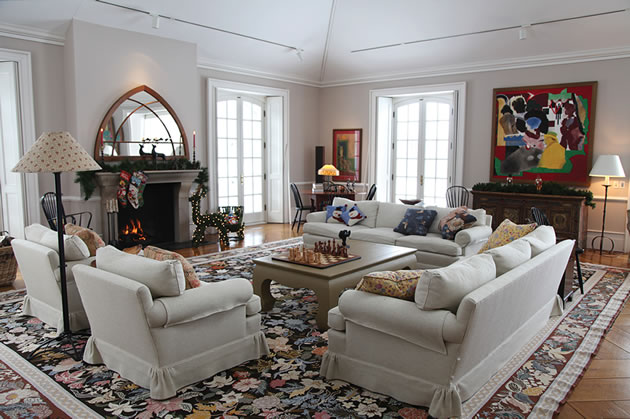 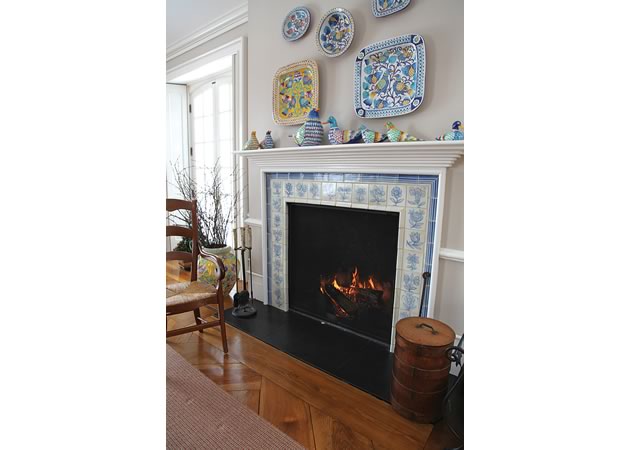 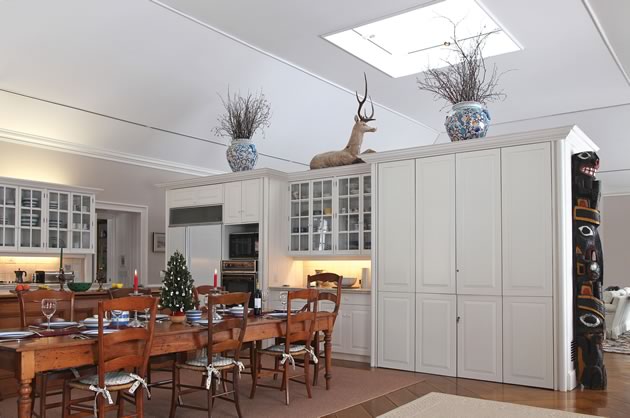 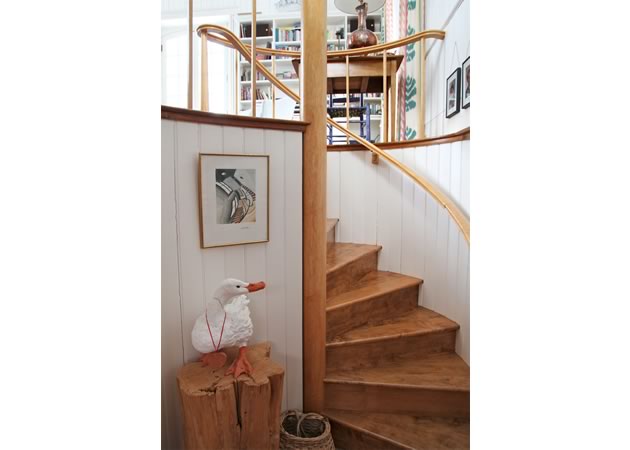 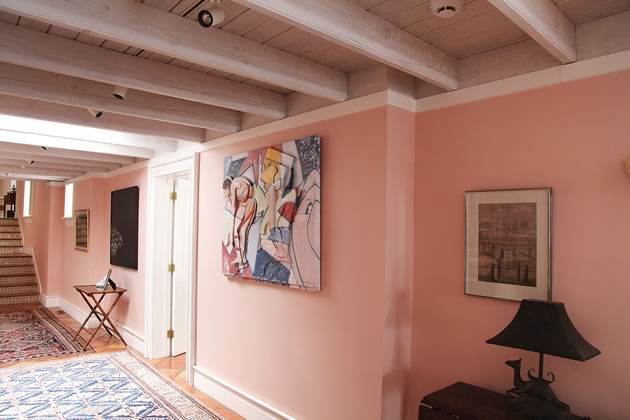 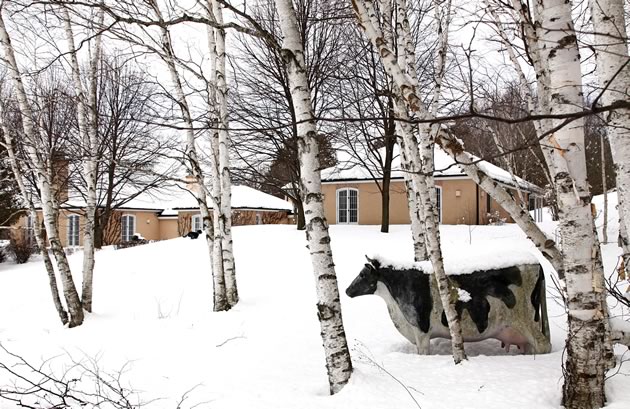 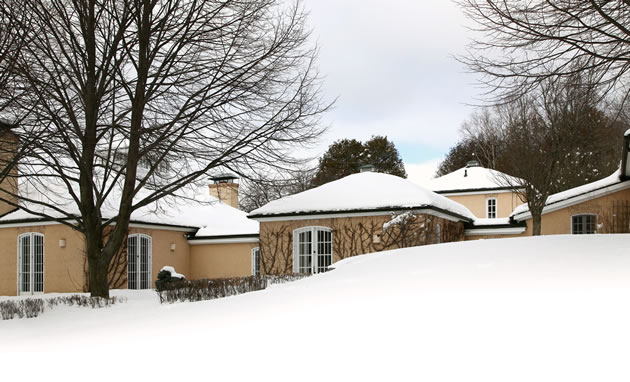 <
►
>
The sights and sounds of the kitchen are concealed by a massive floating wall that provides storage space on the kitchen side.