No Time for Banana Bread

Little did we know we would slowly discover that “country folk” are the hardest working people on the face of the Earth.

“A farm is a manipulative creature. There is no such thing as finished. Work comes in a stream and has no end. There are only the things that must be done now and things that can be done later. The threat the farm has got on you, the one that keeps you running from can until can’t, is this: do it now or some living thing will wilt or suffer or die. It’s blackmail, really.
Kristen Kimball 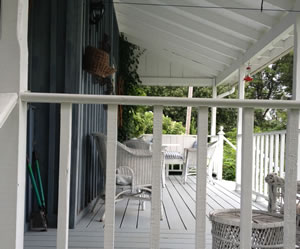 I am imagining many summers sitting on a big comfy wicker chair on her back porch, a glass of cold Chardonnay in hand.

My sister Diane and her family recently purchased a beautiful century farm. This idyllic homestead is located just west of Orangeville. I am thrilled for her and – I have to admit – I’m also quite excited for myself.

I am imagining many summers sitting on a big comfy wicker chair on her back porch, a glass of cold Chardonnay in hand. I also foresee many winters, curled up in front of the massive fireplace, devouring a good book. I can’t wait to assume a pose in the Tricia Romance painting of her life.

Moving day is quickly approaching. The contents of her Toronto home are being packed for the move up to the North Country and the air is filled with anticipation. In the last few days, however, Diane has been voicing some misgivings about her life-altering decision.

“What will I do when nosy, busybody neighbours show up at my door?  What if they arrive with banana bread and expect me to sit and chat?” she wonders aloud.

I can certainly understand how this would be a concern for Diane, because she is a lawyer, working in the field of labour arbitration. She works mainly from home and spends countless hours going over evidence so t she can make informed decisions about employee/union disputes. She certainly can’t afford to spend time chatting with the neighbours. Her time is valuable.

Husband Darrel and I made the move to “the country” in 1992. We packed up our young family and fled the banality of suburbia. Our first rural property was a semi-renovated farmhouse located on 17 acres, just north of Mansfield. It was in this rustic home that we raised our two sons and discovered the trials and tribulations of country life. So I feel qualified to dole out some sisterly advice, and here it is, in the form of a letter:

I have to admit that I had similar misgivings when Darrel and I made the decision to switch to a rural lifestyle.

I worried that I’d miss the anonymity of our former neighbourhood. I certainly didn’t want to be forced into socializing with the local homemakers, joining quilting bees, canning preserves, or baking pies for the Neighbourhood Picnic.

And I could not imagine Darrel partaking in long games of checkers with the local men (decked out in plaid shirts and overalls) on slow, lazy Sunday afternoons. Our time was valuable.

Little did we know we would slowly discover that “country folk” are the hardest working people on the face of the Earth.

The very first night in our heritage home, Eldest Son Ryan and Youngest Son Codey discovered, to their amusement, “something with tentacles” living under our fridge. The beam of the flashlight did in fact reveal two octopus tentacles wriggling and writhing and scratching against the wall.

Darrel was in Vancouver on a business trip, and so it was just me – and two small boys. Who do you call?

I called Mr. Farmer down the road and introduced myself as the new neighbour and explained (in my city-girl voice) that I had an octopus living under my fridge.

Within minutes, Mr. Farmer arrived brandishing a baseball bat. After some quick introductions, he checked out the resident creature and declared that we actually had “two snakes involved in some mating activity.”

Apparently the snakes slithered into our kitchen through a small hole in the exterior wall and decided the warm, dark area under the fridge would be a cozy spot to “carry on.”

Mr. Farmer bravely managed to grab one snake and carry it outside. The mating partner, however, escaped through the passageway from whence it came. Mr. Farmer proceeded to move the fridge and patch the Reptile Portal.  We sighed with relief and thanked him profusely.

I offered him a cup of coffee –but he declined. He told me he had lots of work to do – and with a tip of his straw hat, he was disappeared into the dark night.

But the octopus incident was just the beginning. As the years went by, our family suffered through many rural emergencies.

The first time I attempted to make a fire in the woodstove, I filled the entire house with a blanket of thick smoke. I ran to the phone and my coughing, gasping plea for help was immediately answered by a rural rescue team of neighbours.  I have since learned the importance of using that damper thingy.

When our water supply was suddenly cut off, Mr. Farmer and friends crawled down the well to replace the foot valve. I didn’t even know that there was a foot valve in a well.

An elusive red squirrel lived with us for three weeks, defying capture and defiantly pooping on every surface in the house. Mr. Red Rodent finally decided to make a grand entrance at a bridal shower that I was hosting! Once again, kindly neighbours arrived to save the day!

The furnace conked out on cold winter nights – several times.  The pipes froze and burst, flooding our cellar with gallons of water. Our cars slid into the icy ditch at the edge of our driveway – time after time. Our pond became skanky and green. Do you know you have to oxygenate pond water? 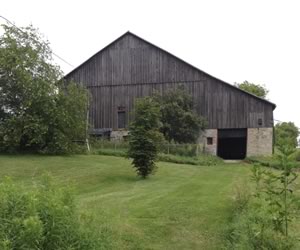 I hit the mailbox with my car on three different occasions.  Our laneway completely washed away in a torrential rainstorm.

We cried a lot.

We grew weary and weak but we carried on, holding our heads high and proudly refusing to allow country life to defeat us. We lived through all of these disasters. We survived with the help and guidance from our country neighbours – our friends!

And so, Diane,  I hope you will grow to love your new neighbours and more importantly, I hope that they will love you too.

They will become your best allies and friends. They will come to your aid at all times of the day and night. They will arrive with buckets and mops and wrenches. They will bring tow trucks and hitches and sand for the driveway.

If you need a barn cat, you’ll receive one. If you need good advice, you’ll get that too. You will be presented with corn (fresh from the field), jars of pickled beets, brown eggs, and, yes, even banana bread.

So, if  you are lucky enough to open your door to find the gift of a new Farm Friend – invite them in.

But don’t be surprised if they don’t have time to visit. There is much work to be done – and their time is valuable.

Laurie teaches Grade 4 at Island Lake Public School in Orangeville and writes in her spare time. She lives in Mono and looks for the humour in everyday country life. Check out her blog “Two Blue Boots”.
Show 23 Comments