Steve Brown: One of our 2013 Local Heroes

For Steve Brown, “telling real stories about real people” is the most important part of his job as archivist at Dufferin County Museum and Archives. With roots deep and wide in the county, and an uncannily acute memory for the intricacies of local family histories and lore, he has become a pillar of the institution and a treasured community resource. 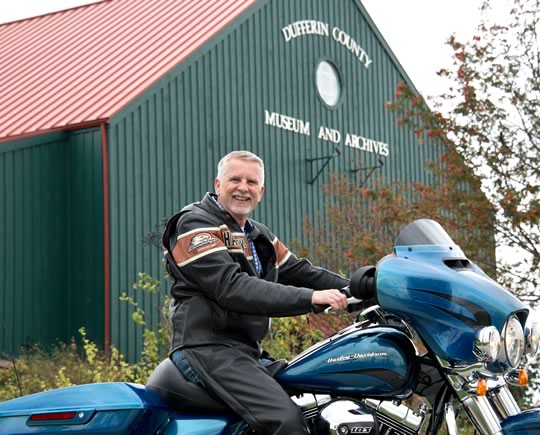 Steve has been part of the museum longer than there has been a museum. He has also authored five books on local history, but history wasn’t always his thing. After graduating from university and briefly pursuing a teaching career, he became a reporter at the Orangeville Banner, serving as editor for a few years in the early 1980s. He was then involved with one of Orangeville’s first computer stores, before operating a printing and copying shop for five years.

After winding down the copy shop venture, he began volunteering at Dufferin’s recently launched museum project, with newly appointed curator Wayne Townsend. When a museum assistant’s job opened up, Steve applied – along with 220 others – and he was hired in April 1993. “It was $18,000 a year. I just about starved.”

Steve proved his worth in the months to come, as final planning and construction of the new museum facility moved ahead. A barn dance held at the official opening in November 1994 is one of his favourite memories.

Ten years later he faced an unexpected health crisis. Steve woke up one morning with some inexplicable bruising on his arms. Within a few days he was an in-patient at Toronto’s Princess Margaret Hospital, undergoing treatment for stage 3 leukemia. He remained in hospital for five weeks, made additional visits in the months that followed and was off work for the better part of a year.

He vividly recalls the day he was sitting in a group chemotherapy treatment session. The doctor entered, shouting, “We have a good remission!” Steve realized that he was the one in remission only when the doctor stood right in front of him. Nine years later, Steve says, “remission” is old news. “Now they use the C-word: cure.”

In Steve’s view the best thing about the museum “is that right from when it opened, and over the course of all the years, we keep seeing two communities: those who were born and raised here, and those who have chosen to make it their home. With changes in society, churches have disappeared, there are fewer community halls and fewer places where people can meet. But the museum is one of them. New Dufferin can meet old Dufferin, tell the stories.”

Still, he believes that his greatest legacy is the collection itself – “quirky, weird and strange as it is.” In the coming years Steve hopes it will grow exponentially because “as things accumulate, each piece begins to inform the others.”

Another of Steve’s legacies will be the community that has grown around the museum. “Way back in the beginning, Wayne and I decided every visit would be a positive experience. Even if someone had come to the wrong place, they should never leave empty-handed, without a lead. To us, that was Dufferin County hospitality. We’ve stuck to it, and I’m proud of that.”

Steve expects to retire in 2015 and says, “I’ve sworn I won’t return to the museum for a year.” After retirement he plans to write another local history book – and to devote more time to his other true passion: a blue 2014 Harley-Davidson Street Glide that he loves to ride on the highways and byways of these hills.