The Quilts of Dufferin County beautifully records the art and lives of women.

1916 The Grand Valley branch of the Women’s Institute creates an autograph quilt. In the design, they embroider the names of local soldiers enlisted in the 164th Battalion. As a fundraiser for the Canadian Red Cross, residents pay ten cents to add their names. The quilt itself is donated to a military hospital in London, England. Or so they think.

Four years later, a Montreal man writes a letter to the Red Cross describing how he found a quilt in a “shot-to-pieces town in France.” He brought the quilt home and wishes to return it to the community, “thinking that it would be of interest to those who signed their names, as it had passed through many vicissitudes.”

The quilt, a symbol of comfort given to a brave soldier on the front lines, is then housed in the Grand Valley Carnegie Library and displayed every Remembrance Day.

Years later, William George Boswell saves the artifact from destruction, and his family donates it to the Dufferin County Museum & Archives where this important piece of history can be viewed by all.

The tale of the Grand Valley WWI quilt is just one of the many fascinating stories found in The Quilts of Dufferin County: Women’s Art, Women’s Stories by Orangeville’s Shelagh Roberts. 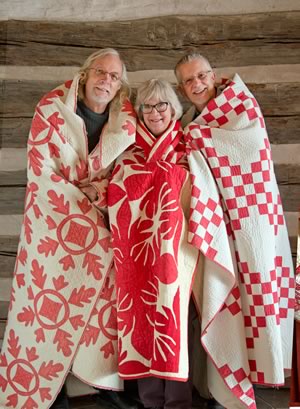 Wearing their story on their backs, author Shelagh Roberts (in Cockscomb) is flanked by quilt photographer Pete Paterson (in Oak Leaf and Reel) and archivist Steve Brown. The Double Irish Chain quilt Steve is wearing was made by his grandmother. Now in the museum’s collection, it is one of the 63 quilts featured in The Quilts of Dufferin County. Photo by Pete Paterson.

The idea for the book came to Shelagh when she volunteered on a documentation project at the museum. She was helping archivist Steve Brown and fellow volunteer Betty Sanderson (also a quilter) to record details of the quilts donated to the museum’s collection, and she recalls thinking, “You can’t write about the stitching or the sashing without talking about the women who made it.” Thus, the search for the women’s stories began.

It took Shelagh six long years of research, digging through old archival material, pestering Steve Brown to fill the gaps, working with photographer Pete Paterson to produce a vibrant photo record of each quilt, and determining the flow of the book with designer Paul Hogeveen – but what a result.

The book is so much more than a catalogue of quilts. It’s a fascinating cross-section of life in early Dufferin County – the successes and tragedies of families who came together to form a community, and how the impact of the outside world, the industrial revolution, the railroad, world wars, depression and boom times, shaped their lives.

The fabrics alone reveal so much. For the functional quilts made purely for winter warmth, resourceful women used old clothes, sacking, and even, at the height of the Depression, the tops of lisle stockings. The beautiful quilt chosen for the cover of the book was sewn by Mary Conn of Mono in 1892. The fabrics are salesman’s samples given to her by her sweetheart, a commercial traveller. Tragically, Mary’s beau was killed in a buggy accident. Heartbroken, she never married and went on to take care of her parents and brothers on the family farm.

Marriage quilts, on the other hand, were made from the best, often purchased, fabrics and showcased a woman’s finest work. One of the earliest examples in the collection is a medallion design by Ellen Mary Burke of East Garafraxa in 1869. The obvious care and dedication in creating the complex Tree of Life design is a reflection of its maker. Mrs. Burke was described as a “formidable” woman, who raised seven children on her own after her husband’s accidental death.

Women’s lives changed with technology and the ability to purchase ready-made goods. Electricity eased the backbreaking work of cooking and cleaning, keeping a kitchen garden and sewing the family’s clothing. Along the way quilting evolved from necessity to art form. Luxury fabrics such as velvets and silks were used to create quilts that hung on display instead of adorning a bed.

Today, after decades of declining interest, women (and a few men) are once again taking up the needle to produce not only traditional quilts, but also artful landscapes, abstract designs and clothing such as vests and jackets.

Women’s stories have been woefully under-recorded in the annals of history. The Quilts of Dufferin County is a wonderful testament to the importance of women’s lives and work. 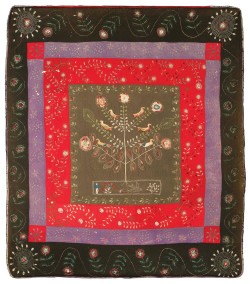 The quilts and stories following  are excerpted from among the 63 quilts featured in the book, a third of the 189 quilts in the museum’s collection. Click on any quilt to see a larger image. 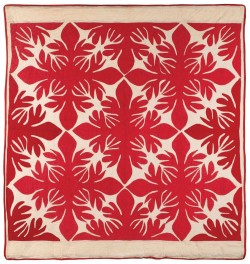 Paper cut quilts are much less common than pieced quilts, at least in the DCMA collection. This one is an impressive example of the style. Made of red cotton appliqués set on point on white cotton whole cloth, this quilt is completed with four corner blocks and four half blocks as fillers. The moderately dense hand quilting is done in a pumpkin seed pattern.

Christine Sutherland, 1877–1963, married Henry Watt, 1874–1944, in Woodstock on 25 July 1900. Based on information from the family member who donated the quilt, we have assumed this to be yet another marriage quilt particularly in light of its spectacular design and good condition.

Christine and Henry made their home at 33 First Avenue in Orangeville for many years. They were the parents of three children, Florence, Helen, and Donald. Henry operated a feed and seed business from 1905 to 1921 in what was the old Jull Mill on Mill Street (demolished in 1991). In the 1920s the business was relocated to Broadway where Henry’s son, Donald, continued the family enterprise for many years. 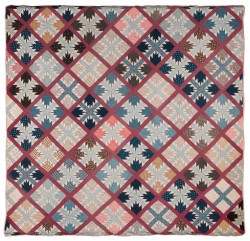 Here we have a stunning example of crazy quilt creation. This quilt has been foundation pieced as one single, large block rather than assembled from smaller, more manageable blocks. Four metallic stars at the corners of the centre medallion make for a striking start to the fabrics that radiate in all directions. Silks, satins, cottons and wool, as well as occasional pieces of ribbon have been combined with embellishments that include a wide variety of embroidery stitches, appliqué, and painted designs. Backing is cotton in a soft gold colour tied with various pastel wools rather than quilted.

The embroidery includes the words Mother, Maud, Rose, Good Luck, and the initials AEF, RAF, MEF, MAF and AFF, the initials of Alice Francis’s five sisters, Annie, Rose, Mary, Maud and Ada. These initials, along with an unsubstantiated date of 1888, suggest that this quilt may have been a gift to Alice Francis from her sisters on the occasion of her leaving home. Alice would have been 18 by then and of an age to earn a living.

Alice Francis was born in Huntsville in 1871 and it was there that she married Thomas Albert Middleton in June 1903. Thomas’s family had moved to Melancthon from the Lindsay area in the late 1870s. The newlyweds settled near the groom’s family, and it was in Melancthon that their daughter Helen Alberta was born in March 1904. 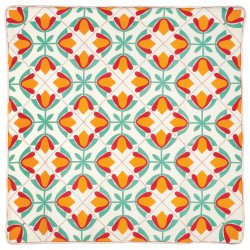 The earliest dated quilt in our collection, this is also one of the most complex Tulip quilts we have. Of red, white, green, and chrome yellow solid-colour cotton, it consists of 13 blocks 40 cm square (15.5 in) set on point with eight filler triangles and four corner triangles, all pieced and assembled by hand. Blocks are framed with fine red piping that carries through to the binding. Hand quilting is echo stitching to the outline of the appliquéd flowers and in a checkerboard pattern in the corners and filler triangles.

The complexity of the design and the care with which this quilt has been preserved suggest that it was part of Elizabeth Duke’s, 1843–1902, trousseau. She was the daughter of Thomas Duke and Jane Ann Wilson of Mono Mills.

Elizabeth married Thomas Rawn, 1836–1905, on 7 March 1861 in a service led by Reverend Alexander Lewis of Mono Mills, an itinerant minister with parishes in Orangeville and Mono Mills throughout the 1860s. Elizabeth and Thomas set up home near Mono Mills on lot 36, concession 1, Albion, where they raised a family of eight children. 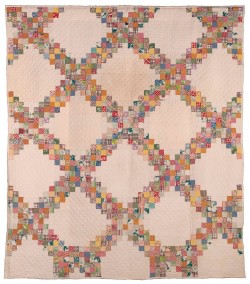 Here we find a superb catalogue of 1930s fabrics that would have been echoed in the pages of an Eaton’s catalogue. Fifteen blocks made up of 81 squares of these fabrics have been combined with white square blocks to create this colourful Triple Irish Chain. The quilt is in very good condition showing little evidence of wear. Although assembled predominantly by machine, the three small squares in the corners of each white block have been appliquéd by hand.

The batting and backing are cotton and have been bound to the top with white straight-cut binding finished by hand. The quilting is diagonal cross-hatching and is also in good condition.

Thomasina “Ena” Atkinson, 1890–1981, was born in Liverpool and moved with her family to Belfast in 1904. She was still living there in the 1920s when she served as The Grand Mistress of the Orange Lodge in Northern Ireland, a dangerous pursuit that ended when her Catholic friends told her she had to “get out now.” Ena and her brother John were smuggled away hidden in a turnip truck.

When they arrived in Toronto John enrolled in Wycliffe College. Ena continued on to her brother George, a clergyman in Mono Mills. Here she met Reginald Jackson, 1890–1984, who was the miller there. Ena and Reginald married in 1923 and settled into life in the miller’s house. All her life Ena enjoyed quilting and according to her daughter who donated the quilt “she would never put two colours together that she didn’t like.” 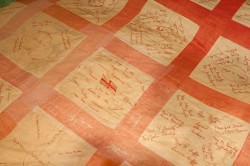 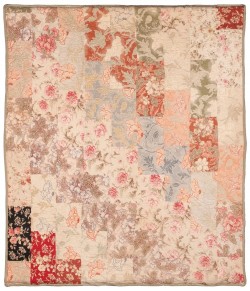 The fabric for this charming quilt was given to Mary Conn, 1868–1954, by her sweetheart, a commercial traveller. The fabrics were his salesman’s samples and tell us something of the variety of fabrics available at the time. The donor says Mary made the quilt about the time the donor’s grandmother, Mary (Patterson) Ewing was married in 1892.

Assembled by machine, these beautifully patterned blocks create a very appealing quilt that is still in very good condition. There has been little fading or wear although the binding is frayed in some places. The backing is men’s shirting fabrics in grey, white, and yellow stripes – also in very good condition.

Sadly Mary Conn’s sweetheart was killed in an accident involving a runaway horse and buggy, and Mary never married. She remained on the family farm to care for her parents. When they died, she stayed on to keep house for her bachelor brothers Isaac and John. When the farmstead was sold in 1937, Mary spent her remaining years with her brother Albert and his wife, Lily May, in Toronto.

An interesting note to Mary’s life is the fact that the family home on the west half of lot 26, concession 5 in Mono also served as the post office for the Elder community for the 50 years of its existence. Mary’s father, Courtney Conn, served as the community’s only postmaster.

About the Author More by Tracey Fockler

Tracey Fockler is a freelance writer who lives in Orangeville.
Add a Comment