A Touch of French Countryside

The kitchen design was influenced by the eclectic kitchens of rural southern France. 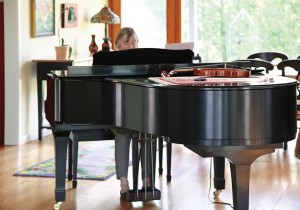 A grand piano is positioned between the living and dining areas, allowing Erica’s music to flow throughout the main level. Photo by Pam Purves.

Erica Pratt is curious, instinctive and has restless feet – qualities that have led her in all kinds of directions. But she’s no dilettante. She is an accomplished pianist, serious student of violin, thoughtful and talented photographer, community volunteer, independent traveller, and disciplined blogger.

Currently residing for a year in a rural area of southern Cambodia where she assists primary and secondary school teachers with English lessons, she keeps in touch with friends and family online. For many of its avid readers, her blog is the highlight of the week. Loaded with pictures and stories of day-to-day life and special moments in Cambodia, it is a vivid reflection of a place and a woman.

Her home in Caledon is the base from which she launches her many ideas and explorations.

Like her other choices, choosing that home turned out to be rather more instinctive than planned. When Erica and her husband thought about moving to the country from Toronto, they presented a well thought out list of “must” features to the real estate agent. The house had to be near water – a creek or river or, ideally, a pond, it had to be set well back from the road. It had to be stone and approached by a long, gracious lane of mature maples. The house they ultimately chose has not one of these features.

This house is contemporary. It was built in 1963 and has floor to ceiling windows, a long rambling layout and large open spaces. It couldn’t be more different from what they thought they wanted. So, what happened? Well, as in so many of life’s unexpected turns – love. They walked into this space and had the feeling of being in a tree house. They loved the light and feeling of expansiveness. They noticed and appreciated the quality of the finishes. And, although the drive is not long and flanked by mature maples, the property is dotted with ancient maples that encircle the house in a warm embrace that keep it cool in the summer.

Building on its “good bones,” they undertook a major renovation shortly after they bought the house in 2000. The existing galley kitchen was doubled in size and another bedroom and summer room were added. 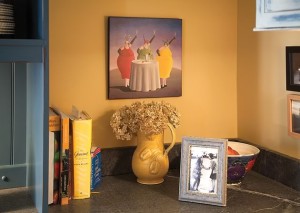 The kitchen design was influenced by the eclectic kitchens of rural southern France. Freestanding cupboards and colourful furnishings make it a lively centre for cooking and conversation. Photo by Pam Purves.

Erica has spent a lot of time in western and southern France and her home reflects that influence. She has absorbed the colours and the unstructured design of kitchens she has visited in Provence and Charente-Maritime, and imported them to Caledon. Echoing the eclectic style of the kitchens of Europe, her kitchen has become a French room in a Canadian country house.

Working with a local woodworker, Hovel Studio of Orangeville, Erica designed the kitchen, introducing freestanding cupboards, a built-in window table, a counter-height fireplace, an island topped with four-inch-thick pine, and strong colours. It can now accommodate the cook, a couple of sous chefs, a dishwasher and assorted loungers sipping a fine burgundy from the cellar. With the fireplace burning throughout the fall and winter, it has become the heart of the home.

Now that she’s lived in the house for 14 years, Erica has come most to appreciate the light and openness. Because she is often absorbed in photography or a creative project with a community organization, her family or on her own, she delights in the space to spread out her work and see it properly in the natural light that pours in from all sides.

The openness of the house has also resulted in all the rooms being used. Moving from a design project to the piano is only a few steps. Moving from there to the kitchen to stir the stew is a short right turn and a few more steps. The southern-exposed office is just a short stroll down the hall. There is an easy logic to the layout that makes work, play and life a little easier to accomplish. And in the wild weather of winter, even the short driveway has proven to be a blessing.

The summer room, or as Erica likes to call it, the salle d’été, is another short stroll from dining/workspace and the kitchen. It is a generous octagonal space, screened in the summer and with sliding plastic inserts that make it a three-season retreat. It is the ideal place for al fresco dining with a table that can seat eight and a sitting area that can easily seat another six or eight. The Provençal-designed fabrics reinforce the French flavour. 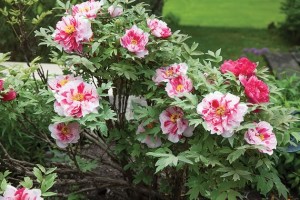 Erica is also an enthusiastic gardener. Her tree peonies, in particular, are astonishing. A large stand of a variegated red and white variety – a type of Paeonia suffruticosa – invariably takes visitors’ breath away as they come into the private back courtyard. In their season they are visible from all the public areas of the house. They should be called “Gloriosa.”

The house and its vivid red horse barn sit on a well-travelled country corner and are a distinctive landmark for neighbours and visitors from out of town. As different from Erica’s original idea of country living as it is, the contemporary home is well loved and well lived in. No doubt it will soon reflect her time in Cambodia, after she returns laden with more fabrics, cushions, art and artifacts from her adventures. 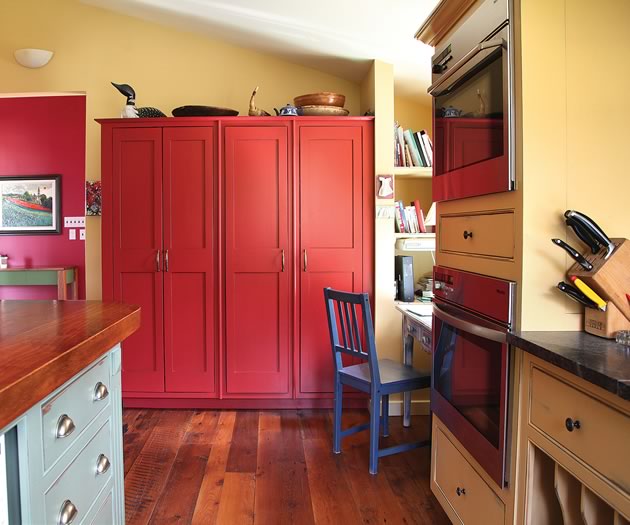 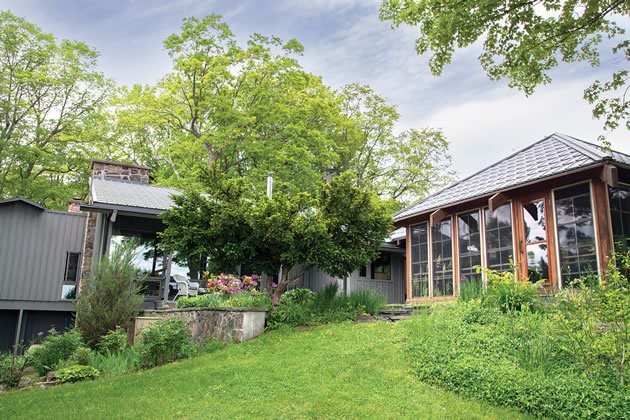 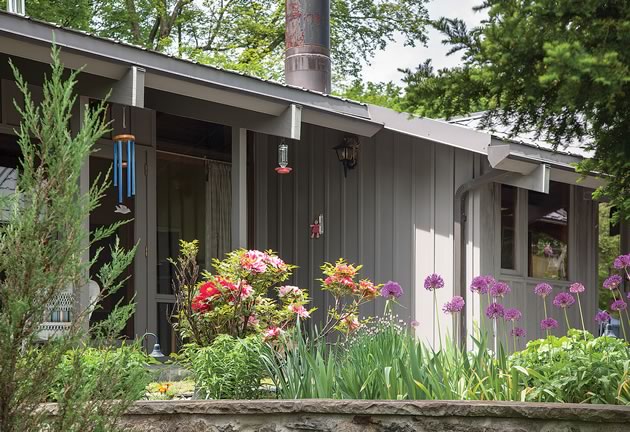 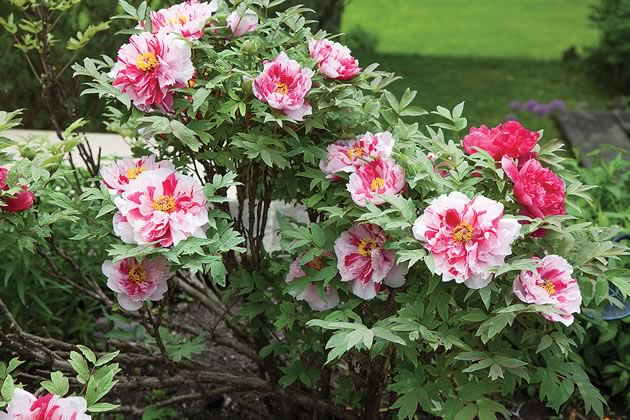 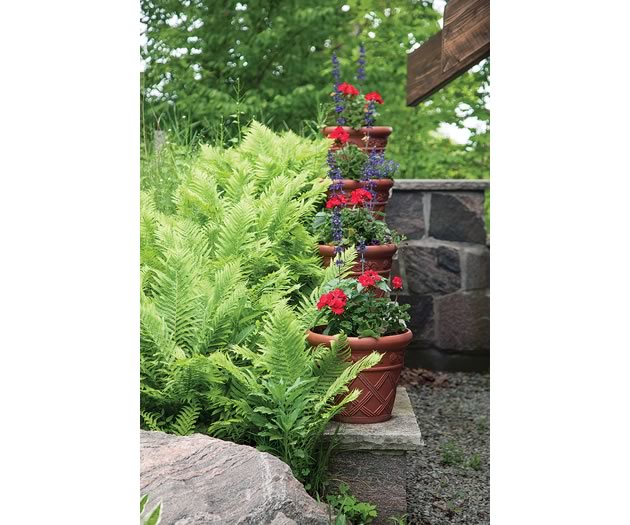 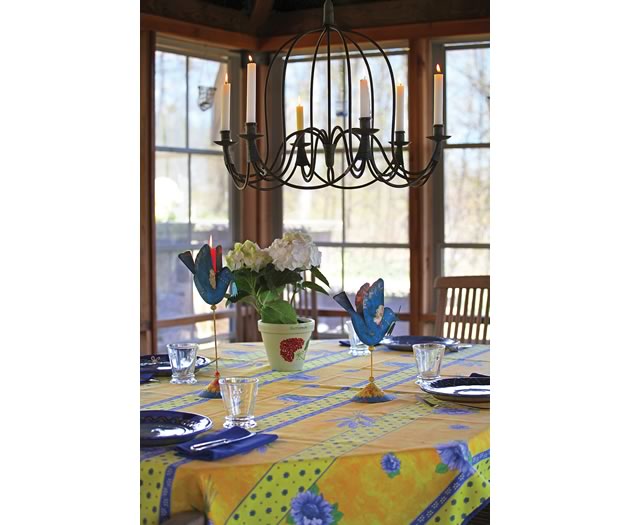 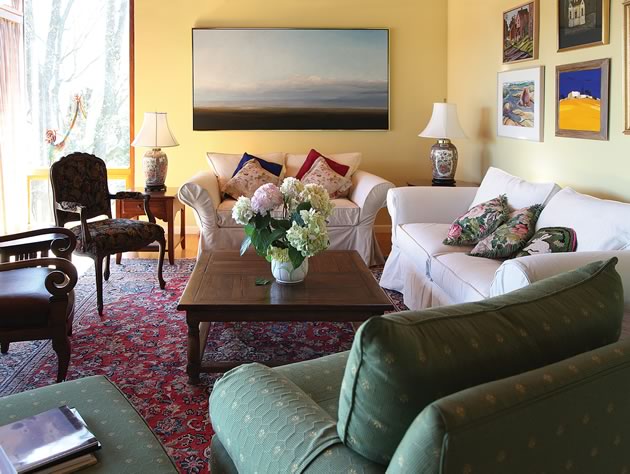 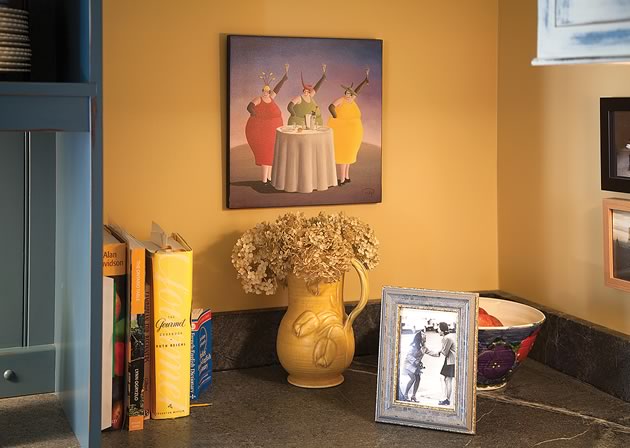 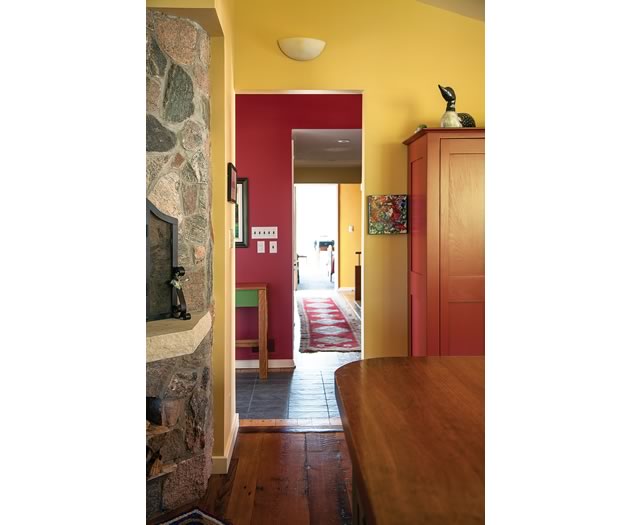 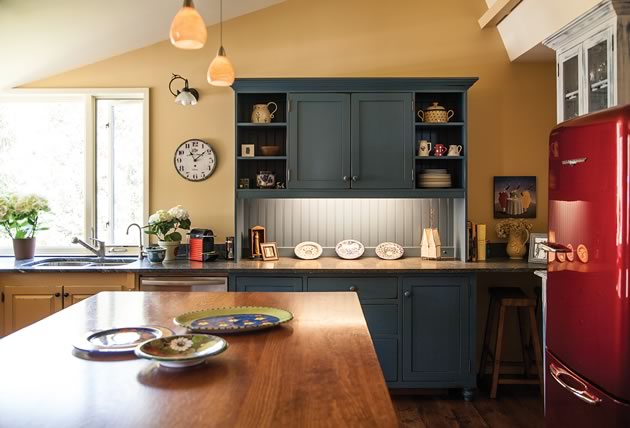 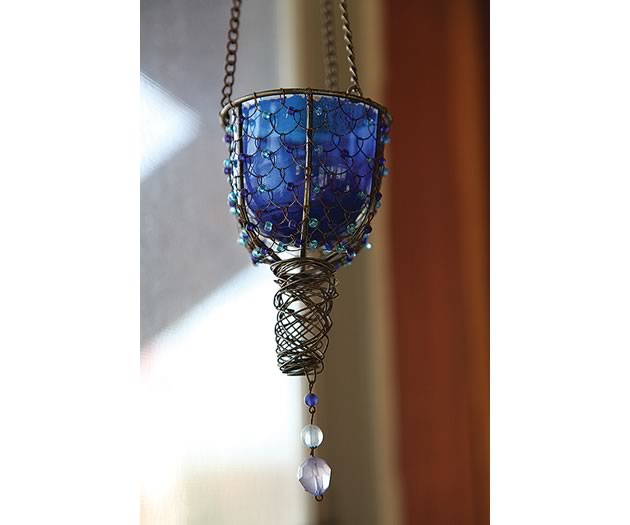 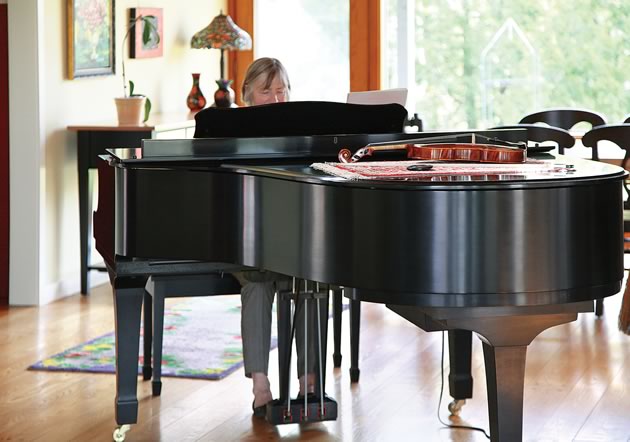 <
►
>
The kitchen design was influenced by the eclectic kitchens of rural southern France. Freestanding cupboards and colourful furnishings make it a lively centre for cooking and conversation. Photo by Pam Purves.