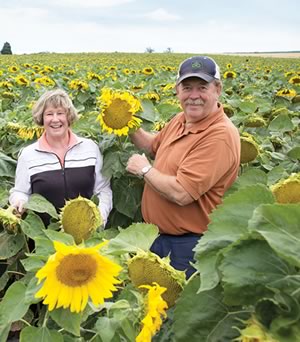 The sunflowers, planted every other year in a field next to Mountainview Road, have become something of a local tourist attraction. Photo by Pete Paterson.

At 31, Sean Davis is a big fan of his friend and customer Jason Lyons and his dairy goat business. Sean’s family owns and operates Davis Feed & Farm Supply in Caledon East. This year the Davis family is celebrating the company’s 25th anniversary of selling a full spectrum of feed for horses, cattle and other livestock, as well as wild birds and pets.

In addition to their retail operation, they also actively farm the land. Sean says his grandpa, Harry Davis, “always had the gist of the traditional tractor and plough. We’ve got 120 acres and all the equipment that he had we still use today.” Their crops include oats they sell themselves and a 30-acre field of sunflowers they harvest and sell for birdseed.

The sunflowers, planted every other year in a field next to Mountainview Road, have become something of a local tourist attraction. “When they’re in bloom, there’s often four or five cars parked and cameras are clicking away,” says Sean.

Sean’s younger brother, Peter, works in rehabilitation for Ontario Streams, but also keeps a hand in the family operation with 250 laying chickens. “We sell eggs to the public and that’s been going really well. We haven’t been able to keep up,” says Sean.

His older brother, Jordan, teaches in Hong Kong, but when he’s home to visit, he too is right back out on the fields, shoulder to shoulder with the family.

Like his friend Jason, Sean went off the farm to pursue outside interests, first studying business computer systems and then obtaining a degree in information technology management from Ryerson University. But like Jason, Sean couldn’t see himself anywhere other than on the family farm. So when he graduated, like Jason, Sean came home and introduced an entirely new component to the family business – a successful garden centre.

Rather than watching the suburbanization of Caledon East with dismay, Sean’s family has actively introduced new products and services to entice the new residential demographic. Sean had spent ten years working at a garden centre off the farm and loved it, so bringing it in was an obvious move for him.

Also like Jason, Sean fell in love with a city girl and brought her home to the family farm, where they are now raising their baby girl, Nora.

Amy and Sean met online, based on their mutual passion for running. Amy hadn’t gone online to find a farmer. She was raised in Mississauga and used to work in materials and logistics at the Ford plant. But Amy’s mother had grown up on a farm in the heart of Etobicoke, an area long since paved over, so perhaps it was in her blood. On their second date, Sean brought Amy for a walk through Caledon East and then around the farm. “She fits right in around here,” beams Sean. And Amy jumps in, “I love the manual labour of it.”

When the Davis family hosted a ploughing match four years ago, “Amy was right into that too, with her pink rubber boots,” says Sean. Her grandmother came out to the event as well. “It was an opportunity to hear stories about her and her dad working on the fields with the horses. Things you just wouldn’t hear otherwise,” remembers Amy, whose enthusiasm for the outdoors meant none of her family was really very surprised when she became a farmer’s wife.

These days Peel farmland is worth more sold than worked, and any pressure the new generation of farm kids feels to continue the family business isoften something they place on themselves. It was Sean’s love of Caledon that made it impossible to see himself anywhere else.

“If you want to do something you love, you find ways to do it. We have a lot of young farmers among our customers and I don’t know anybody who was pressured,” he says. “All the young people I know who are starting in to farm, they were just born into it.” 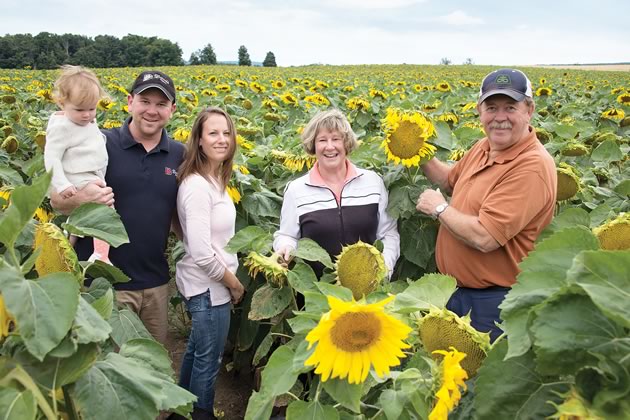 Sean and Amy Davis with baby Nora and Sean’s parents Joanne and John amid sunflowers they grow for birdseed at Davis Feed & Farm Supply. “2013 is the year I’ll never forget because we had four generations living on this farm,” says Sean. Photo by Pete Paterson.