“How ya gonna keep ’em down on the farm after they’ve seen Paree?” That musical question, first posed in 1918 as a generation of American farm boys came home from war in Europe, has remained stubbornly relevant for a century of massive upheaval and transition in the business of farming.

Over the decades, the exodus of kids from the family farm to urban jobs has been so relentless for so many reasons – including industrialization, monopolization, urbanization, and the otherwise too often grim economic reality of trying to make a living on the farm – that according to the Canadian census, the only age group of farmers that is growing are those over 55. In other words, the same farmers are just getting older.

But the numbers may not tell the whole story. Janet Horner, executive director of the Golden Horseshoe Food and Farming Alliance, insists there are “lots of young people farming, but their name is not on the deed, so they aren’t being counted.” (The Alliance is currently preparing an agricultural profile study of the GTA, expected to be released this fall.) Further, according to a 2013 report published by the University of Guelph’s Ontario Agricultural College, “During the past five years, we have increased enrollment across our undergraduate and diploma programs by over 30 per cent.”

And, at least locally, anecdotal evidence seems to confirm the younger cohort is beginning to swell. Sean Davis, one of the new generation of farmers in Caledon, says that of all the customers who come into Davis Feed & Farm Supply, his family’s business in Caledon East, “I’d say 80 per cent have a new generation coming on. It’s great.”

So why are the kids staying down on the farm? The reasons are as complex as the industry itself, but one of them is almost certainly the burgeoning local food movement with its emphasis on reforging the long-broken links between the food we eat and the people who produce it – with one not insignificant result that for the first time in decades in the ethos of popular culture, it’s cool to be a farmer.

But cool, of course, doesn’t pay the bills. Farming remains physically and mentally demanding work, and this new generation who grew up on farms are no starry-eyed back-to-the-landers with a few seeds in their pockets. They know what they’re getting into, and they are coming home armed with degrees in agriculture, business or finance, plenty of marketing savvy, and the latest technological tools at their disposal.

And the results are showing. The government response to a 2010 report by the federal Standing Committee on Agriculture and Agri-food, called “Young Farmers: The Future of Agriculture,” noted that young farmer enterprises “perform better than other farms in Canada.” And that they “earned higher gross revenues from their farm assets and had relatively higher profit margins than did other farms. They also reported higher farm employment income.”

To put things into a local perspective, we spoke with several members of the new generation on four family farms in the Headwaters region. See the links below for their stories. 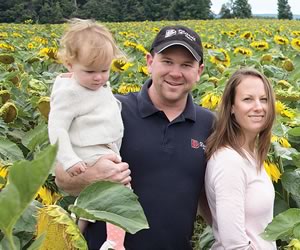