For these brainiacs, it’s a comic book world.

Indeed, this dawning of the geek era has drawn growing ranks of fanboys and girls out from the shadows in and around the Orangeville area. Urban dictionaries define them as passionate followers of various bits of geek culture (like sci-fi, comics, Star Wars, video games, anime, hobbits, sundry board games et al.), many unabashedly so.

Leading the charge locally are two unique entrepreneurs, who both know in their bones that beyond the lure of a vintage Batman doll, a #23.1 holographic Joker comic cover, or a first edition Neo Space Pathfinder game card, the heart of fanboydom all boils down to this – community, the joy of sharing a special kinship with others.

Chris Peddle: Comic Baron of The Gauntlet Comics and Games 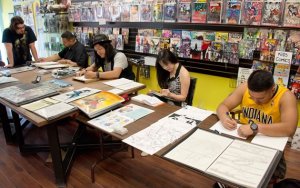 Under the benevolent stewardship of owner Chris Peddle (top), The Gauntlet has become a kind of town hall for the burgeoning local fanboy community. Photo by Pete Paterson.

The business cards perched left of the cash at 14 Mill Street in Orangeville read “Chris Peddle, Comic Baron.” Others in the stack say “Overlord,” “Head Cheese” – classic fanboy whimsy. It’s 5pm on a Wednesday and regulars, most with their own labelled boxes at the front, file in for this week’s installment of their favourite comic series. Behind the counter, said Baron debates with patrons, one 14, one 50ish, about which villain is lamest. Doctor Alchemy, who somehow inflicts evil through transmutation of elements, gets two votes. Drawing from vast comic knowledge, Peddle counters with Captain Boomerang, a disgraced Australian-born major league baseball pitcher who has fallen to the dark side. Only the fourth text of an impatient mother parked outside curtails the repartee.

In a realm that covets the rare and idiosyncratic, it’s clear nothing, not even the global storefront of the Internet, can trump the sheer joy of parsing comic book details face to face with a kindred superhero-loving spirit. For a geek fascination, it’s all so ironically old school, downright tactile for a demographic often stereotyped for their astounding cyberworld prowess. Still, since 2007, this modest side-street storefront has served as town hall for such comic lovers across the region.

Beyond the ritual of picking up weekly hard-copy issues (never digital, except for reference purposes), regular events include visiting comic artists and weekly board game nights (of which the complexity of some makes Monopoly feel like Go Fish). It’s all part of a burgeoning local fanboy community.

“There have always been people who enjoyed comic books, science fiction, board games and all things fanboy. I just think it’s become less taboo,” says 36-year-old Peddle, an Alton/Orangeville native. “It’s now more mainstream to admit you like, say Batman or Star Wars, a lot because of television shows like The Big Bang Theory, a string of blockbuster comic book movies, and other mass media. All this tells fanboy types that you can now show off what you’re into – not be shunned by society.”

And this growing geek culture is far from homogeneous: bankers, teachers, doctors, factory workers, as well as kids and teenagers are among Peddle’s eclectic regulars. He says even young women are coming out of the “geek closet.”

“The clichéd image of sweaty nerds panting over females walking into a comic book store is slowly falling away,” he says. Just ask his girlfriend and work colleague Tahane, who first met Peddle as a customer of The Gauntlet.

The entry points to The Gauntlet’s expanding comic/fanboy kinship are equally varied. Peddle recalls at age seven first poring over Batman, Spider-Man and Superman comics that his parents bought for long car rides to their Parry Sound cottage.

He says some people come into his store as established collectors, but after connecting with others, their interest deepens to fanboy collectibles, such as action figures and t-shirts. Some even move to cosplay – short for costume play – which involves dressing up and pretending to be a fictional character. Think Big Bang Theory’s Comic-Con episode where the show’s cast of nerd scientists get stranded in the California desert dressed like characters from Star Trek: The Next Generation.

Some are regular gamers at the store’s Thursday night HeroClix (a game involving collectible miniatures based on the world of superhero comic books), then get drawn further into the comic world. Peddle says, “Others just wander in off the street and get hooked reading a few titles, learning about characters, storylines or artists from whoever’s here.”

It takes little prodding for Peddle to wax philosophical about what keeps his growing clientele circling back, deconstructing the latest Wolverine, Deadpool or X-Men issue. “It’s an escape from the strife of the world, mortgage payments, job security,” he says. “But it’s also a world that sparks imagination and gives people hope that maybe ordinary people can actually step up, become heroes, maybe circumvent some of the evil of the world.”

Another typical Saturday afternoon – Peddle discusses the latest artwork of Nightwing and Green Lantern with regular Cody Staveley, a young artist lined up to study art en route to being a comic book artist. “I just always wanted people to walk in my store and start talking to others and myself, then be shocked when they realized it was three hours later,” he reflects. “A sense of community. That was my mission.” Mission accomplished. 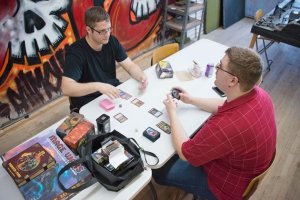 Kris Reilly and Jordan Harrold play Mage Wars, a tactical board game in which each player is equipped with a book of spells. Photo by Pete Paterson.

Friday, 7pm. The lines of tables on the third floor at 113 Broadway above As We Grow in Orangeville begin to fill – parents with kids, retirees, high school friends and sundry adults, some in competitive teams. They’re all here for one reason – to play Magic: The Gathering (MTG) or, as regulars put it, a little Friday Night Magic – a trading-card-based game mixing in a little fantasy role-playing with over 12 million players worldwide.

In just four years, Koros Games has grown from a few shelves of board games in a shared storefront to attracting scores of board gamers from across the region. Weekly game nights don’t involve controllers, online players, and computer-generated explosions. There are no kids sitting motionless (save their flailing thumbs), with dilated pupils fixed on some screen.

No, these gamers focus on MTG, Pathfinder, HeroClix, Warhammer and other intricate strategy games that are emphatically tactile and require constant interaction with people in the room. And most of the games’ fantasy worlds, crazy made-up characters and epic battles actually require imagination from the players. It’s kind of bridge night for nerds. However, ask owner and Orangeville native Shawn Koroscil what he loves most about all this and the typical fanboy obsession with intricacies of the games won’t likely come up.

“Here’s the best part. I’m walking up the stairs to our third floor and all I hear is conversation and laughter. Everyone is carrying on and having a great time.” And he adds with a smile, “I just think life is just too short not to have fun.”

Growing up playing rummoli, euchre and Monopoly with his family, Koroscil learned firsthand the remarkable power of games in bringing people together. He explains, “Families come in and before you know it, kids are sharing things about their lives that have nothing to do with the game. People are connecting with others at completely different stages of life. It’s incredible!”

And while the store dabbles in a variety of fanboy interests, it is the board game events that draw the crowds – support that continues to inspire Koroscil’s vision for the business. 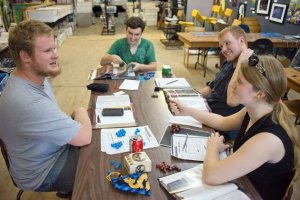 Unlike video games, the board games that attract the evening crowd at Koros Games require constant interaction among the player. Photo by Pete Paterson.

“Originally I asked myself, what would I like to do if I were a kid? Growing up in this area, I would have loved to have had a place to come, play games, have fun.” Indeed, ask him what his future plans are for the business and he insists he has none. “It’s whatever the community asks for. I’ll just keep watering it and see where it grows.”

Like Peddle, Koroscil applauds the changes in society that nurture fanboy or so-called geek culture, even in the years since he was in high school playing MTG at lunch. “We’re changing as a community, putting more value on intelligence,” he says. “It’s no longer uncool to be smart, to be a nerd.”

Still, beyond Dungeons & Dragons, Pathfinder, MTG and various role-playing; beyond analyzing the justice-driven worlds of the Walking Dead or Guardians of the Galaxy, the growing local fanboy culture comes down to this – as Koroscil explains – “If you could go someplace, have fun and feel at home, why wouldn’t you keep going back?” And then, echoing Shawn Peddle, he adds, “It’s all about community.”