Over her more than 35 years in health care, Ronnie (Veronica) Inglis touched many lives. And today, her impact and leadership are as strong as ever.

Ronnie Inglis: One of our 2014 Local Heroes

Growing up in Cornwall, Ontario, Ronnie says, she was fascinated by medicine. “As a child I was always dissecting dead mice and rats.”

Ronnie moved to Orangeville in 1972 to work as a registered nurse at what was then the Dufferin Area Hospital. By 1984 she was head nurse in the ER, and a few years later, she was appointed program manager for the entire emergency department. In the years between then and her retirement from Headwaters Health Care Centre in 2005, she would go on to oversee various units and programs, including the critical care unit, the chaplaincy program and the dialysis department. She also led numerous other initiatives, such as the organ donor and retrieval program.

In 1989 Ronnie set out to develop a sexual assault treatment program, which became a reality in 1991 and includes 24-hour coverage by specially trained nurses. Not content to stop there, Ronnie’s next step was to work with a list of community partners to organize the Sunrise Centre, a secure and separate area of the hospital and the first in Ontario to accommodate women, men and children. In the centre, victims of sexual assault and domestic violence can feel safe as they are interviewed by police and treated.

Ronnie started raising funds for the centre with characteristic determination: “I said if I have to sell cookies on the corner, I will.” That wasn’t necessary, and the centre opened in 2003.

Given Ronnie’s long career, it isn’t surprising that many vivid recollections – some good, some bad – are etched in her memory. Two that touched her heart involve drowning and kids. One young person survived; sadly, the other didn’t. But both families were so grateful for the comfort Ronnie offered during the crisis that they sought her out later to express their gratitude.

Ronnie sums up her contribution as the essential purpose of any nurse: “Do everything you can to alleviate suffering. Not just for the person on a stretcher, but for the family or anyone else who is impacted during a health crisis.”

Honoured this year as Orangeville’s recipient of the Ontario Senior of the Year Award, this nurse extraordinaire is as active as ever. She serves on a number of hospital boards and committees, and makes regular trips to Australia to grab every possible moment with her two grandchildren.

And though she confides that she doesn’t like to cook, she helped serve 80 people Christmas dinner last year at St. Mark’s Anglican Church. “This year,” she says, “we’re hoping to include all the ambulance, fire and police staff who are on duty that day.” 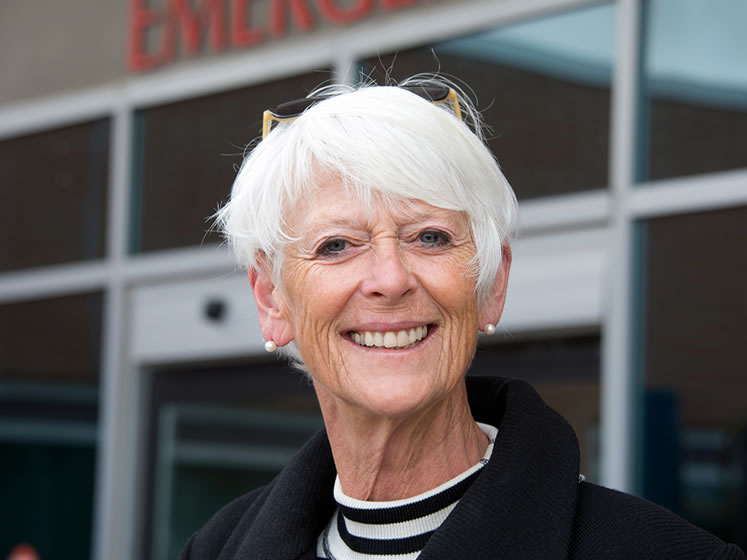 Ronnie Inglis does everything she can to alleviate suffering. Photo by Pete Paterson.

True leaders are sometimes their own worst critics, and Ronnie is no exception. What has she learned about herself? “Sometimes I wasn’t strong enough. I should have tried harder. I didn’t always win.”

If only the rest of us could be half as strong, try half as hard. What a wonderful world it would be.