Sharing the highlights of excellent music that continues to percolate so vigorously in the hills.

When I was in my teens, I had a friend whose father painted as a pastime. I would often get sidetracked during my visits as I became spellbound watching landscapes bounded by water, trees and rocks materialize as a result of some sort of transmutation from mind via brush to canvas. When I hear music I am similarly affected – filled with wonder that a slip of an idea can transform into such a splendid reality. Yet it’s a reality taking place constantly throughout our hills, and the extent and quality of the work is stirring.

That’s why, when I was invited to take up the quill from Lisa Watson, who for years has passionately reviewed the music scene for this magazine, I jumped at the opportunity. It is now my joy to share the highlights of the excellent music that continues to percolate so vigorously through our community. Many of the CDs can be sampled or downloaded below. Downbeat starts right now. 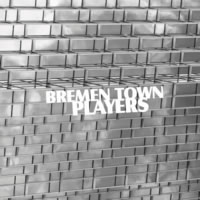 The Bremen Town Players have been on a journey, cavorting and concocting a brand of original music that is like the kick of a mule’s hind hoof through a glass window. Solid and forged like a Gerhard Marcks statue, their music is joyously punchy and eminently melodic. The youthful energy of their live concerts is reflected in this new CD with the help of Juno-nominated engineer Darryl Neudorf. The band recorded it at Operation Northwoods, Neudorf’s studio in Mono. Justin McDonald’s vocal and guitar power are always at the tiller of the Players, but Steph McDonald and Lyndsay Wright lean in to create a satisfying vocal blend until the ladies shove him aside and take over the lead in “Up North.” Cory Bruyea’s backbeat is tasty and relentless as he keeps the project steadily pulsing with rock solid patterns and distinctive tom ostinatos. The half-minute groove at the outset of “Devil in the White City” alone is worth every second!

Songs from My Father’s House 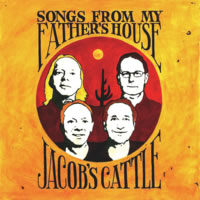 Jacob’s Cattle is the latest musical project from stalwart jazz guitarist Roy Patterson who has been involved in the Toronto jazz scene and played with many of Canada’s jazz elite since moving from Down East in the late 1970s. Along with bassist Paul Donat (now a humble resident of Orangeville), Mike Billard on drums and the fabulous Burke Carroll on pedal steel and Dobro, Patterson has gone in a splendidly new musical direction. This CD is a country-flavoured instrumental disc inspired by the imprints of the music Patterson heard on the radio while growing up in rural Nova Scotia. Each tune is carefully crafted and beautifully recorded at Studio Pierre Marchand in Montreal with 12 intoxicating and purposeful performances. The liner notes elaborate on the genesis and background behind each track – a delightful tangent from most of today’s downloaded music. This sophisticated gem should be listened to in its whole on a sunny Sunday morning – and then press repeat like I did. 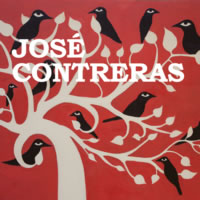 José Contreras’ splendidly crafted musical creations have always impressed me in the context of his band By Divine Right. Songs such as “Supernatural,” “I Love A Girl,” “I Will Hook You Up,” and too many others to mention here, can make you groove, smile and ruminate every time they’re played. Producer Lee Maslin, who has known and worked with this musical artist for some time, has instigated something unique and different this year with the release of Contreras’ first solo record. While nestled in his Caledon recording studio, Contreras re-imagines a selection of his original songs and expresses them in a new and personal configuration. We experience that distinct voice, now accompanied only by guitar and piano, with vocal assists and minimal overdubs tastefully infused. The result is a new perspective on every song – which I found to be like delightfully eavesdropping on the original creation of his music. 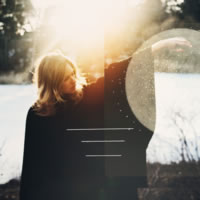 Megan Bonnell’s latest offering is an effortless and relaxing listen that feels like a rescue from siege. Close your eyes and follow along without analysis as her stories untwine. This entire CD is a perfect example of why trolling for singles via iTunes, or streaming single songs in isolation from any artist, will guarantee you’ll miss out on something as beautifully crafted from start to finish as this. Ms. Bonnell unabashedly emotes in her own unique voice, while tastefully accompanied by her musical allies to dramatic effect. Every piece is personal and so thoughtfully produced that I have listened to this seamless performance often, and heard something inspiring each time. Start with “We Are Strangers Now” and “Found You.” 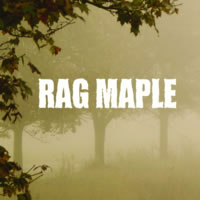 When I first heard Rag Maple’s music, it was like a new neighbour had opened the back-porch screen door and beckoned me in with a welcoming wave. Once inside, Rag Maple greeted my ears with a live, intimate performance of six original stories that seemed written for me alone. I could not get enough of Alex McDonald’s easy vocal delivery, while Sheila Roberts rode shotgun with sweet fiddle work and backup vocals. I’m still a little heartbroken from “Pretty Miss,” and the extra passion from Alex McDonald in “Into the City” finished up the session nicely. Listening to Rag Maple was like an easy afternoon shared with a new friend and an acoustic guitar. I’ll be returning in the afternoons to come. 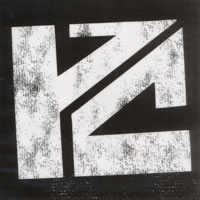 Imagine gathering all the musical talent you can find in a 30,000- person town, recording their offerings at random intervals and then melding it all together into a sonic quilt of musical virtue. It seems like a tall order for any individual, yet Cory McCallum issued the order and has fearlessly brought it to fruition with the latest Pant City release. This CD was recorded for the most part on a Zoom H4N portable recorder on locations throughout Orangeville and it reflects, once again, the earthy and genuinely original material that is continually being written and produced by the dynamic artists in this area. Listen closely and you’ll hear traces of The Haymakers and Grand Fir throughout this musical collaboration, as well as some atmospheric vocal art from McCallum offspring Lenny and Frances.

Mango Pie & Other Delights:
A Harmonica Tribute to Herb Alpert & The Tijuana Brass and The Ventures 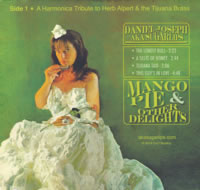 I’m comfortable admitting that I fondly remember Herb Alpert’s classic album Whipped Cream and Other Delights. It played on my dad’s Electrohome stereo for weeks on end when I was…well, never mind how old I was. Meanwhile, The Ventures emanated from the black leather case of my cherished transistor radio. So it was with trepidation that I inserted this Daniel Joseph (aka Sugarlips) disc into the player as I drove to a gig in Waterloo. But wait – as “The Lonely Bull” blasted inside the car and I started rockin’ to the harpster’s rendition of four Tijuana Brass classics, it was clear that I was hooked! The musicianship is excellent, and I tip my cap to Brilliant Fish on the drums. By the time “Telstar” came at me, I was ready and willing to spin this disc another time before I passed by the Blackberry building. 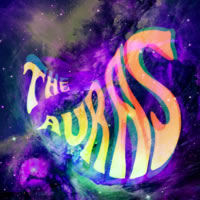 From the first track of their most recent EP, The Auras envelop you in musical colours of heavy love. And indeed I was lifted up and astral projected somewhere back into the past to a party that Randy Newman’s “Mama” told me not to attend. When I want that feeling of those psych-sound swirls again, I’m going to click on “Love Just Spirals On” and “Honey Flower.”

The Peacock, The Deer, and The Moon 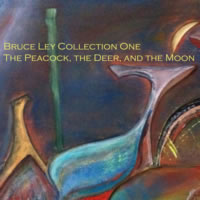 Good friends Bruce Ley and his wife, Candice Bist, have created a trilogy of CDs, with this first having a soul, rock, blues sound. The second will have a country, roots, folk sound, and the third will be lyrical jazz. So far, this labour of love is a beautifully crafted merging of deep-think and a long career of musical talent. Some of Canada’s biggest and talents are featured here, along with more modest ones. Bruce’s longtime associate Steve Kennedy is now playing with Lighthouse and Lisa Watson (hey, that’s me) is retired from a short local career. Bruce’s piano has always enchanted me and the writing in general is warm and relaxed. This magazine’s new music reviewer and drummer exquisite Scott Bruyea, along with so many of our musical friends and family, play and sing along and I know I’m not alone when I say thanks Bruce and Candice for your big hearts. Favourite tracks: “It’s Complicated” and “Broken Hearted Fool.” —lw 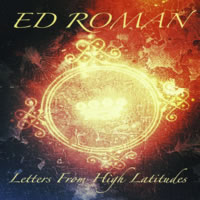 When you’re a tunesmith with as much instrumental dexterity as Ed Roman, it’s possible to toy with any musical genre and have the result turn into something multifaceted yet masterful. On this CD, Roman, who is currently based in Shelburne, layers his thought-provoking lyrics over jazz, reggae and Latin stylings as he sees fit, creating a funky, playful and totally melodious adventure that defies categorization. Great guitar work is prominent throughout this disc and feature artists have been chosen with aplomb, notably Tobias Tinker, who plays a buttery-smooth flugelhorn solo on the bluesy “Rosetta Stone,” and Ansgar Schroer, whose flawless harmonica mastery must be heard on “Tinker.” All told, this is an ear seducer. 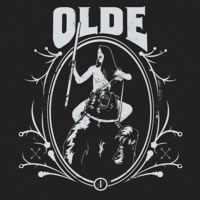 Olde is the newest band added to Toronto’s heavy music label Hypaethral Records, but do not let their name belie the level of power and energy that will be cranking from your speakers when you listen to their first album. Local resident Cory McCallum, who plays bass guitar with Olde, graced me with one of the original vinyl pressings and the eight tracks are aggressive and heavy with crushing guitar riffs throughout. The group, consisting of Ryan Aubin, Greg Dawson, Chris Hughes, Doug McLarty and McCallum, are approaching this genre with a seasoned perspective, resulting in arrangements that are tight, precise and, did I mention, superbly heavy. No track exceeds five minutes – Olde gets down to their musical business sharply. Black Sabbath is an obvious influence, but Olde would musically push Ozzy and Tony into a small corner until they petitioned for release. 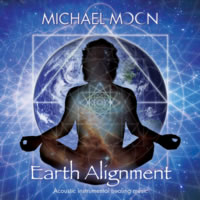 Headphones only, svp – recorded at 432 hz to capture the whole range of sound – all acoustic, no electronics, a wash of healing harmonics. Most recently appreciated at this year’s Weekend in the Woods wellness event in Hockley, Michael Moon has been tuning into solfeggio frequencies for a few lifetimes, judging from the magic here. Vibrational medicine seeps its way into our cells, our DNA, and is transformational. And there’s a subtle flow with a variety of texture that feels like a really good scratch. Get into the zone with such fabulously named tracks as “Liquid Dawn,” “Neritha’s Dance,” “Call of the Devas” – ooooooommmm, baby. —lw

If you are a musician or band reviewed on this page and would like a link, song or video embedded please email the details to Valerie Jones. Thank you!

About the Author More by Scott Bruyea

Scott Bruyea is a musician, sales consultant and internet entrepreneur who lives in Orangeville.
Add a Comment