“Your Christmas concert must be first-rate. Nothing less!”

During the 1800s, teachers in local one-room schools faced  a list of expectations and responsibilities so onerous,  it’s a wonder so many carried on.

In a profession that was already more than daunting in the 19th century, winter presented an extra set of challenges. The annual and absolutely obligatory Christmas concert was one of them. So when Albert R. Robertson signed on to teach for the 1891-92 year at Finnerty School, S.S. #12 Albion, he must have known that like every new teacher in a rural school, he would be pretty much on probation until his first Christmas concert was deemed satisfactory.

The concert was an event much anticipated at country schools and always well attended. Finnerty, at least twice that decade, had been obliged to relocate to a nearby barn because the school was too small to accommodate the overflowing audience.

What made concert preparation especially stressful for teachers such as Mr. Robertson was the inevitable rural school population bulge that developed after the harvest was in and the fall ploughing done. Older boys and girls in a school section would return to class to continue an education that in most cases had gone on pause when seeding began in April.

The increase was often dramatic. In November at Finnerty it was not unusual for the pupil count to spurt from just 20 students to 40 and more.

For the teacher, the sudden addition of older students meant established routines were interrupted, and for the new arrivals, the switch from the relative freedom of outdoor activity to the regimented environment of the classroom often stirred a brew of discipline problems.

According to Albion historian Esther Heyes, Mr. Robertson was warned by the trustees that he would need a cudgel to control the boys from certain families. Whether he actually used one was never recorded. Still, its existence must have had some intimidation value, for cudgels, yardsticks, harness straps and birch canes appear regularly among the purchases recorded in school minute books throughout these hills.

Mr. Robertson not only had to restart the curriculum for these returners – and inevitably remediate a number of them – he also had to redevelop and expand the concert program because it was mandatory that every pupil have a part. But the winter challenges did not end there.

Potatoes in the Ash Pit

There were some basic, seasonal issues – such as identifying potatoes. At schools with the luxury of a real stove (not just a big iron kettle of the type used in one of the early Erin Township schools), many students dropped raw potatoes into the ashes in the morning to have them cooked by noon. Like all teachers, Mr. Robertson knew enough to require the students to carve their initials into the skins to preclude spats over whose potato belonged to whom when lunchtime came. Simple, but it was yet one more task.

A more onerous challenge was lighting the fire each morning and keeping it going. That job often fell to older students, a privilege that sometimes enabled some creative mischief. In 1869 at The Maples, S.S. #6 East Garafraxa, for example, in addition to dry, burnable wood, trustees saved money by mixing 20 cords of green wood into the winter supply. It’s difficult to imagine students ignoring the opportunity to fill the school with smoke, especially if a spelling test was imminent.

On the other hand, earlier in the century, there was the case at Erin Township’s very first one-room school. The teacher and his family lived rent-free in the school, a privilege that enhanced his $100-a-year salary, and probably motivated him to keep a fire going at all times once the cold weather arrived.

A Counterweight to Winter Stress?

But cold weather also had a plus side in the one-room schools. Outhouse mischief was far less common in freezing weather and, for obvious reasons, there was a sharp decline in that time-honoured schoolday avoidance technique: the extended outhouse visit.

A drop in temperature brought other benefits too. Just south of Finnerty at the Dingle School, S.S. #11 Albion, surrounding swampland brought in mosquitoes at plague levels in late spring and early autumn, so the first frost provided welcome relief. (Mosquitoes were an issue in many country schools. The Branch School in East Garafraxa was even called “Mosquito School.”)

At Finnerty, along with suppressing mosquitoes, cold weather had a dampening effect on a rather peculiar discipline issue: students spitting tobacco juice into the inkwells! “The chew” was a common antidote to the dust at threshing time, and some of the “returners” tended to keep up the habit.

Still another example of seasonal relief arises from an account of the early days at Rockside School, a simple log building in Caledon Township. On warm spring and fall days, an older pupil regularly carried in a pail of drinking water to be shared via a single dipper. This was a normal practice in every one-room school, but when a pupil at Rockside once managed to share his (or her) impetigo with the entire school, everyone must have been grateful for the arrival of winter when the need for a drink was less urgent. 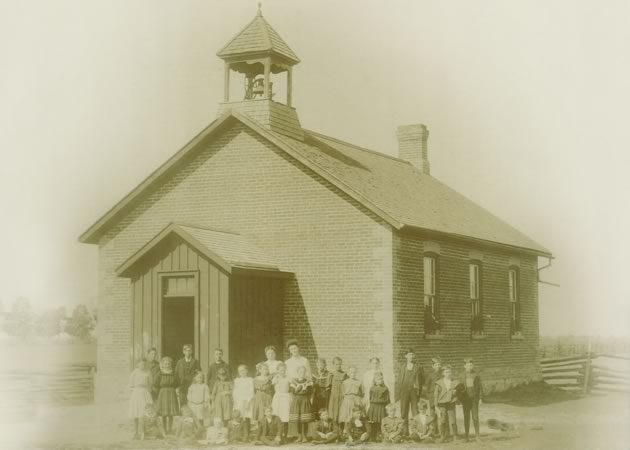 Students outside SS #5, East Luther (Colbeck School) in 1908, the year it was built to replace an earlier wooden schoolhouse. The school served Grades 1 to 8 until 1918 when Grade 9 (Continuation School) was added. Courtesy Dufferin County Museum & Archives , P- 4500.

All the one-room schools in these hills were “public” in the 19th century, a fact that, given the Orange vs. Green undercurrents that prevailed here, sometimes posed considerable tension for teachers with Catholic students.

The provincial curriculum mandated Bible study (King James Version), along with a daily dose of Protestant hymns, and these hymns along with Bible readings often figured prominently in the Christmas concerts.

Nevertheless records reveal little evidence of strife in school sections, especially where population distribution had been influenced by religious preference. Mono and Mulmur Townships, for example, were mainly Protestant and trustees naturally sought out Protestant teachers. Mr. Robertson, at Finnerty School in more Catholic Albion Township, had mostly Catholic students. However, where the population was more religiously diverse, there was more potential for stress.

At Mono Mills’ first log school, for example, highly regarded teacher Thomas McLaughlin was a Roman Catholic. Early in his tenure he found a note one morning that instructed him: “You are not to teach any of our children your Roman numerals! The Protestant numerals are what we want in this school!”

But Really … Was It All That Bad?

There is little doubt that teaching in a one-room school was no breeze in the 1800s. What with limited equipment, discipline issues, fluid student populations, outhouses and mosquitoes, these professionals had a lot on their plate. And some of them didn’t last. In 1853, the Common School Regulatory Act provided specifically for “worn out teachers” [sic]. Yet, surviving stories, the diaries and the memories – if not the official records – suggest that for many teachers, the experience was more positive than otherwise.

A stellar example was that of much-loved William Judge who began teaching at age 16 in the 1860s and taught for 70 years at six different schools in and around Palgrave. And there is the example of Mr. Stuart of Kilgorie School, S.S. #15 Mulmur, whose love of teaching and confidence in his skills made him notorious throughout the hills for challenging the school inspector, knowing he had the full support of his students and their parents.

But what of Mr. Robertson’s first Christmas concert at Finnerty School? The records don’t say. He left the school after just one year. Maybe the concert didn’t measure up. Or maybe his use of the cudgel, or lack of it, was a factor. Or perhaps it was the annual salary. He was paid $310

For Women Teachers, Even More Challenge

In the mid-1800s, few one-room schools in the province had women teachers because women were not expected to enter the professions. Once that reality changed, there was still considerable reluctance to hire women for fear they could not maintain discipline. However, once trustees realized they could get away with paying women teachers about half the salaries of men, the gender count shifted dramatically. By about 1880, women teachers were in the majority. Almost all took positions while single. Once married, they were expected to resign. Women continued to earn lower salaries than men in Ontario until well into the 20th century.

A Rural vs. Urban Attitude?

Here in the hills and other rural areas it was expected and indeed planned that many students would be out of school and “on the farm” at crucial points in the harvest cycle. The concept of truancy was therefore interpreted very liberally  and always adjusted to immediate demands.

However, in urban areas like nearby Toronto, schools performed a kids-off-the-street function in addition to the more lofty goals of education, a reality perhaps illuminated by Don Jail statistics from 1892 which listed 90 pupils,  14 years of age and under, charged with truancy.