Seneca was nearly 60 when he came to Mono, an age when many people look forward to ease and comfort.

Some of his contemporaries admired his generosity, devotion and commitment. Others called him a stubborn zealot, eccentric and “not very sane.” But all of them agreed on one point: Seneca Ketchum was impossible to ignore.

Around 1830, when Seneca Ketchum settled in the Purple Hill area of Mono Township, the capital of Upper Canada was still called York, settlements such as Bolton and Erin were tiny blips on the map, and these hills had yet to meet Orangeville’s deemed founder, Orange Lawrence.

But to Seneca, the gradual spread of civilization into the wilderness of newly surveyed Mono Township was an opportunity to pursue his life’s passion: spreading the word of God via the Church of England. For 20 years he did just that, in Mono and beyond, with an intense single-mindedness that moved almost everything in his path.

Worthy of a Dickens Novel 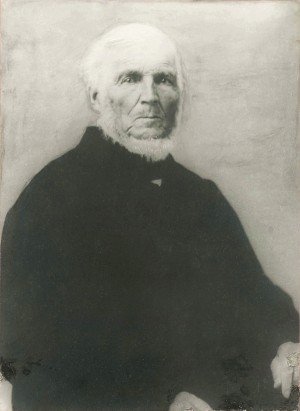 Seneca was nearly 60 when he came to Mono, an age when many people look forward to ease and comfort. And that choice was open to him – by 1830 he’d become well-to-do on his lands in present-day North Toronto. But the plot of Seneca’s life, even its very beginning, was anything but ordinary.

He was born in 1772 near Albany, N.Y., just in time for the American Revolution, which, because the Ketchums were Loyalists, made for an uneasy and often dangerous childhood. In 1788 his much-loved mother died after the birth of her 11th child (she was just 36), and like a character in a Dickens novel, he was literally tossed out into the world. Ten Ketchum children were settled with neighbours, but Seneca, at 16, was told to fend for himself.

Another Dickensian blow was delivered when he reunited some years later with his younger brother Jesse (see sidebar), freely taking Jesse into his comfortable home where the housekeeper was a radiant young widow whom Seneca hoped to marry. The housekeeper married Jesse.

But perhaps the greatest emotional pain of all for Seneca was an unfulfilled desire he carried throughout his life. From early childhood on, he felt a powerful call to the ministry and had committed his life toward becoming ordained. However, circumstances conspired against him and it never happened. Still, it was this dream of ordination that brought him to Canada.

For Seneca, only the Church of England mattered, and in post-revolutionary America that made him an outlier. Thus in 1792, with his hope of achieving holy orders still very much alive, he set out for a country where the denomination meant something. At age 20 he landed in Cataraqui (Kingston) where his passion for expanding the Church of England took its first step.

Over the next 50 years Seneca Ketchum became what one historian called “an Anglican whirlwind.” The year he arrived in Kingston, he helped establish that community’s first Anglican church. Within months he had moved to Newark (Niagara-on-the-Lake) and helped build St. Mark’s there. When Governor Simcoe moved the seat of Upper Canada to York, Seneca moved too, and in 1797 became a builder, charter member – and voice to be reckoned with – of York’s first Anglican church (eventually St. James’ Cathedral).

On Sunday mornings, from his home near present-day Yonge Street and Highway 401, Seneca would walk two hours to St. James’ for morning services. Then in the evening he would hold a lay service in his home – until 1816 when he cofounded St. John’s Anglican in York Mills. With this neighbourhood church in place, he then moved these home services to Thornhill and Markham. All this before he moved to Mono where his activity ramped up even further.

Seneca came to Mono with a theoretical step up in the Anglican hierarchy. He was licensed as a lay missionary by Archdeacon (later Bishop) John Strachan. It was an unpaid, quasi-official position that gave Seneca some status, but it is easy to believe Strachan saw it as a way to entice Seneca to leave York where they regularly locked horns. In any case, the new lay missionary was eager for challenge and his arrival in Mono was marked by a flurry of activity that began before the ox carts were unloaded.

Like all first-in pioneers, he built a family home and then helped build more homes on his several tracts of land for the families he’d persuaded to come to Mono with him. Over subsequent years he built bridges and roads and was regularly celebrated for providing food to the township’s pioneer families.

But all this effort was secondary to his lay missionary work. He spread the word, freely handing out Bibles and the Book of Common Prayer. He taught catechism (and literacy), and held services everywhere at every opportunity. These hills were still the domain of the saddlebag preachers in the 1830s, and because Seneca’s home became a regular way station for them, his role continued to expand.

In 1837 Seneca built St. Mark’s, arguably his most enduring legacy because it became the foundation for today’s St. Mark’s Anglican parish in Orangeville. This first version was a log church on Seneca’s land on Mono’s 1st Line East. It instantly became a focal point of religious activity in the township and beyond. And, possibly because it was a project by Seneca, it quickly attracted some controversy too.

Just six concessions to the east at Mono Mills was St. John’s, also an Anglican parish. Neither church had a resident ordained minister, both being served by an overworked itinerant pastor (called “travelling missionary”) who had still other churches in his charge. There being no rectory, the two Mono churches competed to house this pastor, and it seems St. Mark’s, as a consequence of Seneca’s generous hospitality, was a frequent winner. This not only stirred the ire of the parishioners at St. John’s, but even led Bishop Strachan to warn one itinerant pastor there was “much to fear from Seneca’s excited state of mind.”

Sadly, Seneca died before St. Mark’s ever did get a resident pastor, but throughout the 13 years after building “his” church, he continued to pursue his passion at full throttle, preaching, teaching, building – and giving. In 1845 he gave the (Anglican) Church Society of Toronto 300 acres “for the benefit of the missionary doing duty in Mono Township.” He built a rectory at Melville. Although records are fuzzy, he is said to have built at least six more churches, likely family chapels, in Mono.

Although Seneca never escaped his reputation as an eccentric (perhaps deserved to some extent – in 1847, for example, he set aside land in Caledon Township for a Sailors’ Home), there can be no doubt about his significant contribution to the development and growth of Upper Canada. In the early history of these hills especially, there are few pioneers to match him for energy, achievement and profile.

Seneca’s brother Jesse (1782–1867), younger by ten years, is perhaps the best known of this active and influential family, owing to his involvement in the Upper Canada Rebellion of 1837, his successful commercial and real estate enterprises in Toronto and Buffalo, N.Y., and his support for universal education. (A Toronto school is named for him.)

He was a philanthropist and, like Seneca, a strong believer in temperance (their father, also named Jesse, was a notorious drinker). Unlike Seneca, this Ketchum was a Presbyterian. (Perhaps not coincidentally the brothers’ housekeeper, Ann Love, whom Jesse married in 1804, was a fervent Presbyterian.)

A third Jesse (1820–1874), the son of Jesse and Ann Love, is well known in Orangeville. This Jesse is credited with positive developments in the town, such as the wide design of Broadway, its main street, and the numbered grid pattern of streets to the north. He also donated the land for present-day St. Mark’s in 1854.

Orangeville’s Jesse is buried at Forest Lawn Cemetery on the edge of town. His father lies in Buffalo, N.Y. Seneca is buried at St. John’s, York Mills. He died there while in Toronto to petition Bishop Strachan for a full-time pastor for his beloved St. Mark’s.

Caledon writer Ken Weber’s best-selling Five Minute Mysteries series is published in 22 languages. Ken is also the Historic Hills columnist and puzzle meister for this magazine and has a loyal following here in the hills.
Show 5 Comments

Ketchum family lore has it that Seneca was utterly devastated when his housekeeper chose to marry his brother Jesse in 1804, but two years later Seneca married his neighbour Ann Mercer (1782–1847). The marriage bond lists her as “a spinster of York” and contemporary accounts portray her as gracious and becoming. Her family was prosperous and she shared Seneca’s sense of generosity. The couple had no children and when they left Toronto for Mono, they donated most of their land for what became the city’s first mental hospital.